In a League that Lives by the Three, DeMar DeRozan Chooses to Play His Game Skip to content 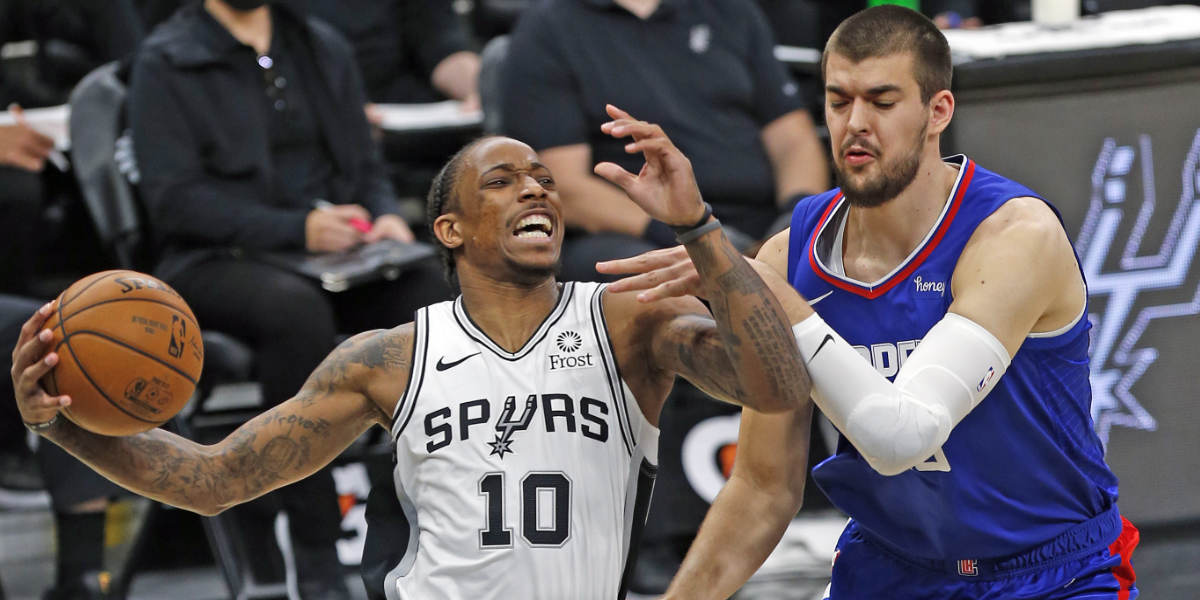 Not shooting 3’s in today’s NBA is the equivalent of using a flip phone. It’s an out-of-date decision that – typically – suggests a certain level of stubbornness. Why do I need that new-fangled apple thing if I can text on this!? Well, perhaps because there’s a more efficient way to type the letter “O” than pressing No. 6 three times!

The ability to sink the deep ball not only makes a player a more versatile threat, but it opens up the floor for the entire team and leads to more points per possession. Players across the league have made it a priority to add this to their games for a reason. Chicago Bulls big man Nikola Vucevic is a prime example, gradually increasing his 3-point attempts each season since 2016-17 until he made it rain in 2020-21 with a career-high 440 attempts (which was 151 more than the season prior). Lonzo Ball has also seen a boost over the past several seasons, going from 228 in 2018-19 to 396 in 2019-20 to a career-high 455 last season in New Orleans.

However, not all of the Bulls’ new additions have followed the league trend. In fact, DeMar DeRozan has gone so much the other way that he might be back to using telephone booths.

To be sure, DeRozan has never been a 3-point marksman. While he built up his attempts each season at the beginning of his career, it was not until late in his Raptors tenure that he started to regularly shoot triple-digit 3-point attempts in a season. And, even then, it’s not like DeRozan was putting up what could be considered a high volume of attempts. His career-high in attempts came during his final season in Toronto (2017-18) at just 287, which sat 95th in the league. Also, even if he did begin to take these shots more frequently, it’s not like his percentages went up. DeRozan shot just 31.0 percent that season from downtown, and the best year of his career came in 2015-16 when he shot a lackluster 33.8 percent. But, hey, at least he was taking more, right!? Wrong.

When DeRozan arrived in San Antonio, his numbers went in the opposite direction faster than my girlfriend when I go for a kiss post-tuna melt. He took just 45 attempts in his first season with the Spurs (making just seven). The following two seasons, DeRozan went on to shoot 35 (making nine) and 74 (making 19). Threes never made up more than seven percent of his shot selection during his three seasons in San Antonio, never ranking higher than the 1st percentile, per Cleaning the Glass.

In other words, it feels like DeRozan has only grown more allergic to shooting from downtown, which is incredibly rare for a player of his stature. But is it necessarily a problem? The man himself does not seem to think so.

“I’m going to be honest with you, one thing I always hate that people always say: ‘I can’t shoot 3s.’ I choose not to shoot 3s,” DeRozon said in a recent episode of No Chill with Glibert Arenas. “It’s a difference, you know what I mean? I always felt like I could get to my spot, get to the rim or get fouled or play-make for somebody else.

If you’re not stopping me from doing what I’m best at, why should I revert to what everyone else is doing? That’s just my basketball knowledge and understanding … stop me, what I’m doing first. Force me to shoot 3s.”

DeRozan has a point.

Again, advanced analytics do plenty of the talking, and it’s is clearly advantageous to have this as part of your game in today’s NBA. At the same time, DeRozan has proven to perform at such a high level on offense without embracing the three that it does feel kind of silly to ask him to change. If it ain’t broke, don’t fix it, right?

I mean, 17 players have scored at least 4,400 points over the last three seasons. Out of those players, no one did it on fewer total 3-point attempts than DeRozan, per StatHead. He took just 154 over the span, and the second-lowest was Giannis Antetokounmpo … who took 717! I’m not sure anything stresses better how rare of a player DeRozan is than that stat. He has continued to be one of the league’s best scorers without even trying to add one of the league’s most coveted skillsets. How the hell does he do it?

DeRozan is one of the most lethal midrange threats in the game, and he might still be getting better from that area of the floor. The 32-year-old shot a career-high 48 percent on all his mid-range looks last season, which ranked in the league’s 87th percentile. A strong ability to get to the free-throw line is another important layer to his game. He averaged 7.2 attempts a night in 2020-21, and he took the 8th-most free-throws in the league. Add in an improved pick-and-roll playmaking ability (career-high 7.2 assists per game), and DeRozan has been able to maintain his place among the league’s top offensive talents.

I do have to wonder if we will see him hit under the triple-digit 3-point shot attempts next season in Chicago, though. While he will never become a volume shooter from downtown, I have to imagine he will find himself in a handful of catch-and-shoot opportunities as he plays a bit more off the ball. After all, catch-and-shoot 3’s already made up 63 of his 74 attempted last season, per NBA dot com, and I can envision him receiving more in this pass-happy/ball-movement offense.

At the same time, the Bulls took only the 17th-most 3-pointers last season. Zach LaVine, Nikola Vucevic, and Lonzo Ball have all proven to be efficient from behind the arc too, so the need for him to do anything from downtown is rather minimal. And perhaps that is another reason we should worry a little less about the fit. While DeRozan will need to learn how to mesh alongside another high-usage backcourt player like Zach LaVine, he does have teammates who can make up for his deficiencies (er … I mean … things he chooses not to do). Everything will come with a learning curve, but he should be able to play his game in the confines of this Bulls roster.