Actually, Zach LaVine and DeMar DeRozan Can Fit Together Just Fine, Thank You Very Much Skip to content 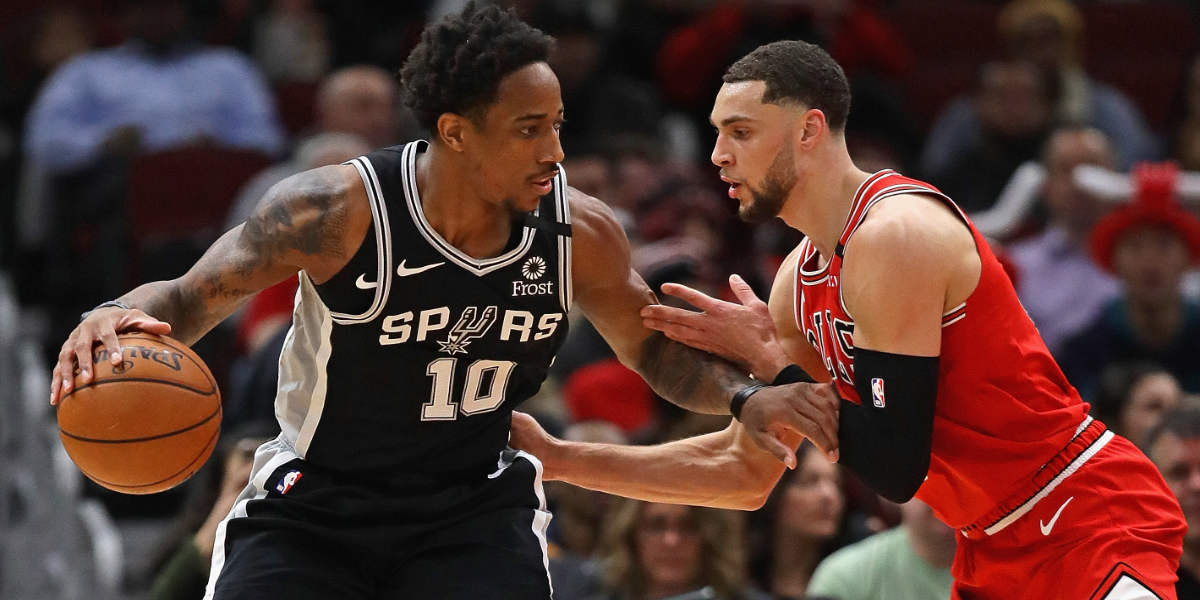 Taco Bell and my stomach? That’s a bad combination.

Zach LaVine and DeMar DeRozan? Not so much.

From the moment Adrian Wojnarowski reported the union between DeRozan and Bulls, people around the league have questioned whether or not LaVine and his new teammate could co-exist. Myself included.

LaVine has been the Bulls leading scorer the past three seasons (and it would’ve been four, if not for his ACL recovery). Meanwhile, DeRozan has been the top bucket-getter for his squad in seven of his last eight seasons. The only season he technically failed to reach the mark was in his first with San Antonio, where he and LaMarcus Aldridge basically tied at 21.0 points per game.

In other words, both LaVine and DeRozan have been ball-dominant backcourt players accustomed to running the show. There is no denying that. However, when we move past the surface, it’s not difficult to see a world where these two All-Stars co-exist.

We often forget that environment can make a big impact on a player’s perception around the league. LaVine grew to know this all too well the past several seasons. As his game grew and the former regime’s draft picks shrunk, LaVine found himself playing an even stronger on-ball role. The lack of a true distributor and push-the-pace point guard put an even greater emphasis on his need to create. But LaVine does not need the ball in his hands at all times to be an effective player. Isn’t that right, Zach Lowe?

“I think there has been way too much emphasis on what DeRozan can’t do and not enough on how he will make LaVine’s life easier,” Lowe told Chris Herring on a recent episode of the Lowe Post Podcast. “LaVine is one of the best cutters in the NBA. Just recalibrating LaVine 10 percent from on ball creation, shift 10 percent of that too off-ball finishing – both from 3 and cutting baseline – is huge for him because he is not a good enough distributor to be on-ball as much as he have been.”

Not only will having a more legitimate half-court playmaker in the backcourt alongside him help LaVine reserve energy, but it will allow him to do two of the things he does best.

LaVine is one of the top cutters in the league with his quick first-step and wicked athleticism. He was second in points per possession when cutting to the rim last season behind only Anthony Davis (minimum 50 possessions), per NBA.com, which ranked in the 97th percentile. His free-throw frequency on these cuts also sat at 27.3 percent, which was second-highest behind only Karl-Anthony Towns. With high-IQ players like DeRozan, Vucevic, and Ball on the floor, and the defense’s attention also spread across these three players, this could become an even more frequent way LaVine tears apart opposing teams.

Then, we shouldn’t forget that LaVine has improved his outside shot each season since arriving in Chicago. The three-level scorer knocked down a pretty ridiculous 48.6 percent of his catch-and-shoot 3’s last season and had a 68.5 effective field goal percentage in catch-and-shoot situations. Again, with a pick-and-roll maestro like DeRozan on the court, and a strong post-passer like Vucevic in the mix, LaVine is looking at even more easy 3-point opportunities.

Don’t get me wrong, LaVine will still want to have the ball in his hands when he wants it. He was still one of the most efficient isolation scorers in the league last season … but so was his new teammate. DeRozan finished with the 3rd-highest field goal percentage on ISO buckets last season with a 52.6 percent success rate, whereas LaVine finished right behind at 51.3 percent, per Basketball News dot com.

For DeRozan, however, this off-the-dribble scoring is far more of a necessity. The four-time All-Star has shot comfortably under 30.0 percent from long-range on his career (and only took 75 total 3-point attempts last season), and he shot a dismal 28.6 percent on catch and shoot 3’s last season. The dude is simply not an outside threat, and you can read more about that here.

DeRozan has built a name for himself with mid-range scoring and crafty pick-and-roll play. During the 2020-21 campaign, 72.3 percent of DeRozan’s made field goals were unassisted. LaVine finished with 58.9 percent of his made field goals being unassisted. In other words, LaVine demonstrated far better balance scoring the basketball with and without being the on-ball initiator.

I am not sharing these numbers to try to say something we did not know already. However, I do think understanding the components of each player’s game helps illustrate that sharing the court may not be as difficult as some think. LaVine and DeRozan might be two offensive-minded players, but they can score in different ways and take much-needed pressure off one another.

Of course, with that said, these two players have to be willing to take that pressure off their own shoulders. Adding one high-usage player with another high-usage player always comes with bumps in the road. For LaVine and DeRozan, there will have to be a commitment to letting the other cook. Fortunately, LaVine sounded cognizant of that in a recent interview with Heavy’s Sean Deveney.

“I think we all have the right mentality going into it,” LaVine said. “We all have to be ourselves and learn how to be a team. There will be roles that will have to be established but at the end of the day, that is what we are out here to do, collectively to win.”

The process of establishing those roles might already be underway. LaVine, DeRozan, Nikola Vucevic, Lonzo Ball, and several others have been spotted together at the United Center several weeks out from training camp. The more time put in now, the easier the adjustment should be when the real games tip off in late October.

If you ask LaVine, though, the fit is zero concern for him and this revamped roster.

“I don’t get that at all, because that’s just outside narratives,” LaVine told Deveney. “At the end of the day, we are some of the basketball players in the world and we know how to make something work. It’s our job to get out there and get to know each other, obviously personally and as a basketball player. It’s easy to make things work on the basketball court if you all have the same intent, and that’s winning.

There is no denying he has the right mentality going into this highly-anticipated year, but obstacles are unavoidable. He and DeRozan – along with everyone else – will still experience a learning curve (particularly in late-game situations). But the foundation of an elite offensive is sitting right there, and I expect these two gifted playmakers to make it work.