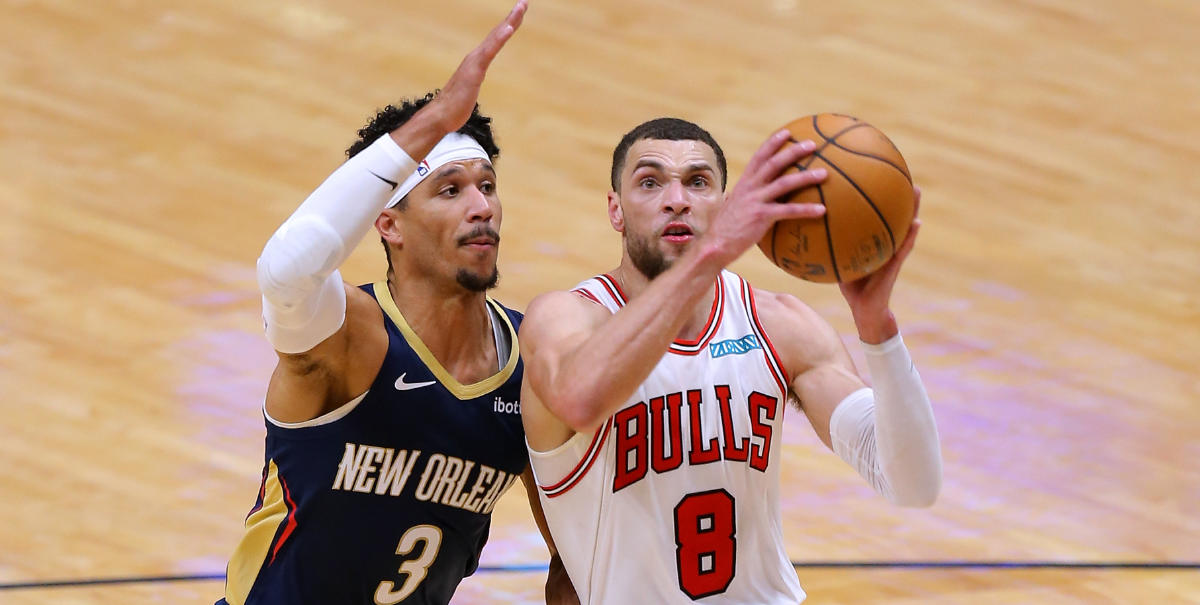 We have a new staff writer, and he wrote the post below.

I DEMAND you give him a warm hello! DO IT, YOU COWARD!

How To Watch the Blackhawks at the Tom Kurvers Prospect Showcasehttps://t.co/4ODS7EAVyP

•   Zach LaVine may be only 26 years old, but he is this team’s bona fide leader. The organization threw all their eggs in the Zach Attack Basket this offseason, using the acquisitions of DeMar DeRozan and Lonzo Ball to show him that they’re ready to take the next competitive step with him at the helm. And while there are massive expectations on each of these newly acquired pieces (including trade deadline get Nikola Vucevic), the majority of that pressure will fall on LaVine. Arturas Karnisovas and Marc Eversley bought into his continued development, and I don’t think it’s crazy to say this team will only go as far as he will take them. Is the man ready for that responsibility?

•   Sure, he has years of experience being the face of the franchise, but he does not have years of experience being the face of a *winning* franchise. In fact, he has never played on a single above-.500 team in his career. Winning simply takes a different kind of leadership, and this season we will all see how LaVine responds to being the No. 1 on a team with two previous No. 1’s (DeRozan and Vucevic). Fortunately, the man did sound comfortable in his ability to play the role in a recent interview with Vincent Goodwill of Yahoo Sports. He came off confident that his actions-speak-louder-than-words mentality can accomplish what it needs to.

“I’m going to go out there and show with my hard work and the way I play. And when I do talk, I think it will hold some weight. We have a good team with a lot of different personalities, but I think a lot of people still want to prove things. I have a chip on my shoulder like always, and that’s always something good to have when you have a team like that.”

•   For the most part, I think commanding respect through work ethic and performance is completely doable. I also think he already possesses a lot of that respect due to the fact that many of these new faces chose to play with him. With that said, he is going to have to speak up. As the longest-tenured Bull and the clear foundation of this team, he will have to be the loudest voice. He said it himself: “When I do talk, I think it will hold some weight.” The going will get tough this season. Hell, many have already aggressively doubted what this team is capable of accomplishing. LaVine needs to be the one to keep everyone’s head on straight as a handful of these guys play for arguably the most talented roster they have ever been on.

•   I want to give a big old wet grandma smooch to the final two sentences of LaVine’s comment. A lot of the skepticism around this team revolves around the fact that these three All-Stars have not accomplished much in the postseason. LaVine has never sniffed it and Vucevic only smelled it through one nostril. DeRozan has won a playoff series multiple times, but he only really came “close” to something special once (2015-16 when the Raptors lost 2-4 in the Eastern Conference Finals to LeBron James). While it is obviously preferred to have more proven playoff talent, this team should have no lack of motivation. We are talking about three guys who have been questioned over the years for their inability to be truly elite winning players. Now, all able to bolster their reputation together, this should be one dedicated group.

Training camp will be more important than these voluntary workouts, but it’s nice to see this roster is eager to put in the work.

The more chemistry high-usage guys like LaVine, DeRozan, and Vooch can build now the better. So pumped for this group.https://t.co/TL6499nolx

•   I love this comment from Zach Lowe on his recent pod about Karnisovas’ ability to keep things close to the vest:

“He is elite. Arturas is elite, he doesn’t just not take the bait, he looks at the bait and spits at it with disdain. He will not be taking any of the bait. Your bait could be the most delicious hogie in the world, and he is not taking it.

•   Lowe and Sports Illustrated’s Chris Herring went on to say a similar thing about Billy Donovan. It’s one thing to dodge questions for the sake of protecting your image, but it’s another thing to dodge them for strategic purposes. Karnisovas has so far done the latter.

•   Listen to the podcast below:

•   DeRozan wants you to know his kicks are special.

•   Some nostalgia for your Wednesday.

If you know, you know. pic.twitter.com/MW2B7fHnwT

•   ICYMI: This is pretty cool! I love to see the game expand.

The NBA G League will have its first Latin American team in the 2021-22 season – the Mexico City Capitanes – but the Capitanes will play all of their games in the United States due to COVID-19 restrictions on international travel.

The Bears Hosted Three Defensive Backs for Tryouts (Because, Well, You Know)https://t.co/A2QvYLcPBz

•   If you’re not excited about this guy … you’re a filthy liar.