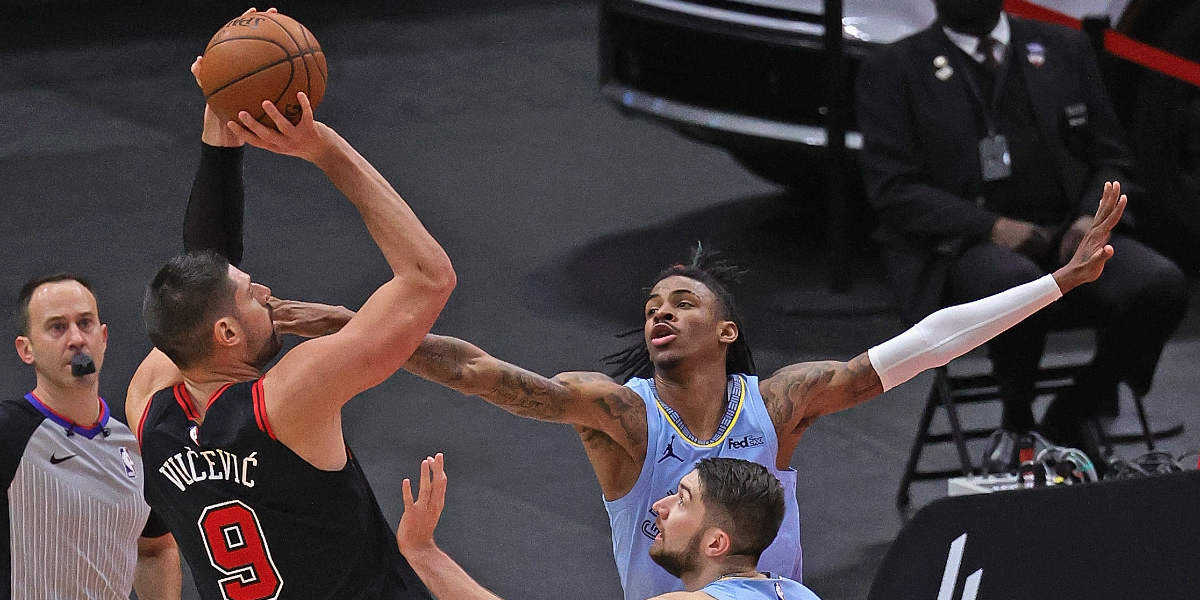 On October 22nd, I shall be comfortably planted at a GarPax-less United Center to watch Lonzo Ball break Tomas Satoransky’s ankles and Zach LaVine dunk on Garrett Temple. Patrick Williams will also surely block Zion Williamson to the moon, and DeMar DeRozan will give Brandon Ingram the work in the midrange. The Bulls will proceed to win 120-12. Duh.

Seriously, though, I could not be more excited to get back to the Madhouse on Madison. Seeing a full crowd there for the first time since the league was forced to shut down in the 2019-20 season will be a truly special experience. I look forward to celebrating that moment with a rowdy crowd and new-look team. Only 36 days to go!

•   We have entered the Twilight Zone, folks: I’ve located a ranking with which the majority of Chicago Bulls fans can probably agree. According to Hoopshype, Nikola Vucevic is the 7th-best center in the league. Nikola Jokic, Joel Embiid, Rudy Gobert, Karl-Anthony Towns, Bam Adebayo, and Deandre Ayton all sit ahead of the Bulls All-Star big man, and I find it hard to have a gripe with that list. While Vucevic’s offensive talent is superior to some of the names ahead of him, I agree that his defense drops him down a few pegs. The guy is not as bad as many think (he is a smart player with a big frame who knows where to be to contest shots), but his general lack of athleticism and verticality makes him an inferior rim protector/shot blocker.

•   Also, for what it’s worth, a winning resume will always matter. All those players ahead (with the exception of KAT) have some proven postseason play and highlights to flaunt. Vucevic has that one ridiculous 35-point, 14-rebound Game 1 win over the Milwaukee Bucks in 2019-20 (seriously, rewatch those highlights here because it was just utter dominance), but after that it’s just a couple of first-round, five-game exits. In fact, a recent winning track record is likely why we see Deandre Ayton ahead of Vucevic. I think a case could be made that Vucevic is currently better, particularly because Ayton surely benefits from the presence of a HOF playmaker like Chris Paul. But if Ayton can prove to start this season with the same efficient and destructive two-way play we saw in the Suns’ playoff run, I can understand his sixth-place ranking.

•   Coby White put in some work at his old stomping ground.

•   Putting aside the fact I still have to get used to his new haircut, I’m encouraged by the fact that White could be seen conditioning in a couple of recent photos. While we have no idea if he is back to shooting after the surgery on his torn labrum, it appears he has been able to stay in shape and get back into the gym in some capacity. We should get an update on his status sometime in the next few weeks. When the report of his injury initially broke, the word was he would be re-evaluated in October. The expectation should still be that he misses the beginning of the season, however, since “re-evaluation” does not signal a full return to basketball activities. If anything, as K.C. Johnson noted back in June, the back end of this recovery process could take six months, which means there is a world where White is not back on the floor until December.

•   Lonzo Ball, Alex Caruso, Derrick Jones Jr., and Tony Bradley all showed up at last night’s White Sox game to throw out the first pitch. What did we learn? Ball apparently has a vendetta against mascots. The dude threw a full-blown heater right at Southpaw’s head!

•   DeMar DeRozan needs the ball in his hands to do his best work, but Zach LaVine can live with that.

•   A great move by the Milwaukee Bucks. Congrats to Lisa.

•   Is this supposed to make me feel better or worse?

•   The Bulls and Blackhawks are both set for some important training camp battles.

After the addition of Marc-André Fleury, who will be Chicago’s backup goaltender? https://t.co/btayFbKQMH