Nikola Vucevic's Routine, Playoff Expectation, Year 2 of The Paw's, and Other Bulls Bullets Skip to content 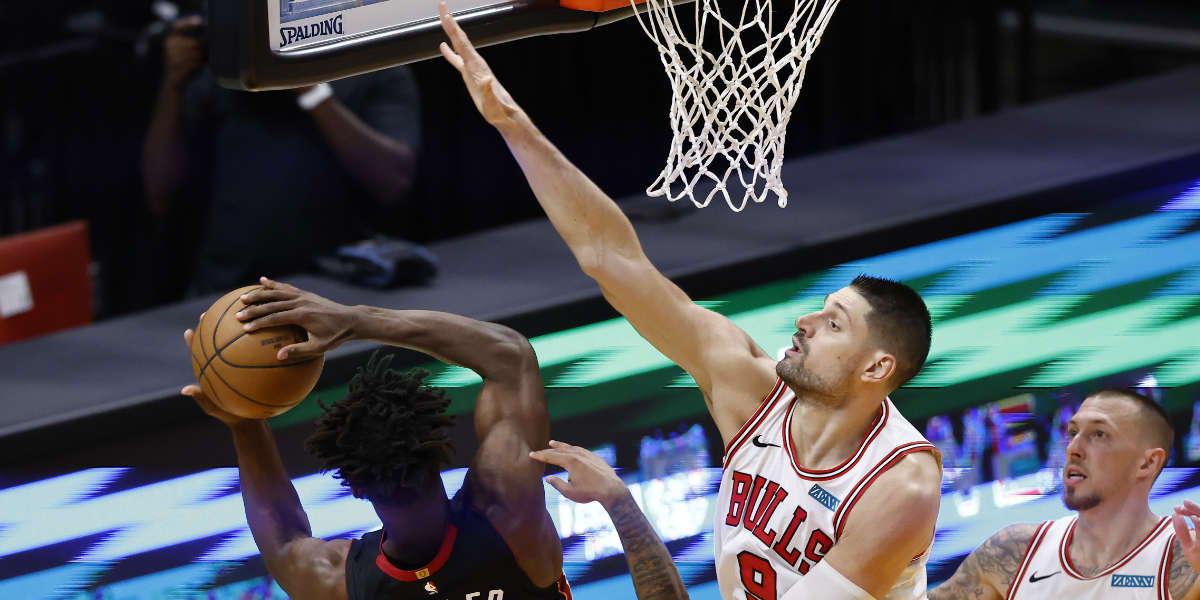 A celebration for the ages is in store.

•   In a recent interview with NBC 5 Chicago (which we will provide more thoughts on in a later post), Coby White said one small thing that caught my attention: “I stand back and watch how Vooch carries himself and takes care of his body off the court.” White uttered these words when talking about the learning opportunities he believes come with this re-worked roster. And, interestingly enough, this was not the first time I have heard someone specifically mention Nikola Vucevic’s off-court work. Back in May, the Bulls new big man sat down with a close friend and former Orlando Magic teammate Terrence Ross for an interview on the TRoss Podcast. Somewhere in the mix of Star Wars discussions, trade deadline stories, and reflection, Ross commented on Vucevic’s extended warm-up routine.

“You should see the way Vooch warms up. It’s an all-day process, especially on the road. We didn’t have a shootaround this year, but he would always be in his workout clothes in the morning. He would be coming from a workout to go to shootaround when we can’t even really go anywhere. And then he would be like, ‘I have to go foam roll in my room. I have to go bike in the room. I have to go take a nap, and get ready.’ I’m like, bro, it’s an all-day thing for him!”

•   Vucevic could not help but laugh while Ross went on and on about his strict gameday structure, but he also couldn’t deny the facts:

“I’m not the type of guy who can just lay down all day and then go play. If I do that, I’m going to have the worst game ever. I have to activate myself. I have to break a sweat. I have to do something. Even on back-to-backs, I go ride the bike for 10-15 minutes, I stretch, I do things, so I can get moving.”

•   Not only do I love that this kind of dedication has clearly made an impact on White (and will likely have an impact on other young roster members), but Vucevic’s reliability now makes that much more sense. Other than an 11-game absence toward the beginning of 2019-20, Vucevic has only missed two straight games once over the last three seasons, and it came toward the end of 2021-22 when the Bulls appeared to be cautious about his playing time. I know this phrase is often oversaid, but availability is the best ability. Chicago heavily struggled in that category with their former frontcourt talent, and they now have an All-Star caliber player who seems to have a strong routine down that prioritizes staying on the court. Now, I’ll proceed to knock on all the wood in my house to make sure it stays that way. BRB.

•   NOT BREAKING NEWS: “This year, the expectation around the Bulls organization is to make the playoffs, so that will be the focus this year,” Stadium’s Shams Charania notes. All things considered, I think it is safe to say this was the safe assumption after the team, once again, sent draft equity out and spent plenty of dollars on multiple win-now pieces. We are also talking about a front office that made a push for the playoff’s a pretty clear goal last season post-trade deadline. Still, it’s nice to hear this emphasized. The previous regime always seemed to hedge their bets, but Arturas Karnisovas and Marc Eversley have been nothing short of clear about their intentions.

Our @camronsmith chats with @PatGarrity8 & @ShamsCharania about what the Bulls season could look like.

•   CBS Sports’ Jasmyn Wimbish wrote a fun post sharing four reasons why we will see the Bulls take the next step this season, and I encourage you to give it a read here. Honestly, my favorite reason does not even revolve around any of the talent faces but rather a 20-year-old beast. Not only should the fact Patrick Williams started 71 games last season have an immediate payoff, but he will be surrounded by some truly special playmakers. The presence of Ball and DeRozan will take away some of the offensive pressure and replace it with a handful of easy buckets in transition and around the rim. Meanwhile, as someone who expressed plenty of upside as a help defender in college, I look forward to seeing what he can do in the frontcourt for a full season.

🚨 Bulls tickets are on sale NOW 🚨

•   Happy Birthday to one of the most accomplished coaches in NBA history.

The coach behind 11 NBA championships, including three separate three-peats 🏆 pic.twitter.com/HMnShzYCbW

•   Lauri Markkanen sighting! Looks like he is preparing to get posterized on October 5th.

5v5 and it feels so good 😍 pic.twitter.com/NLxnzjH6K4

There Should Be a Ton Of Opportunities to Go Deep This Weekend Against the Bengalshttps://t.co/jI4FstFRd4