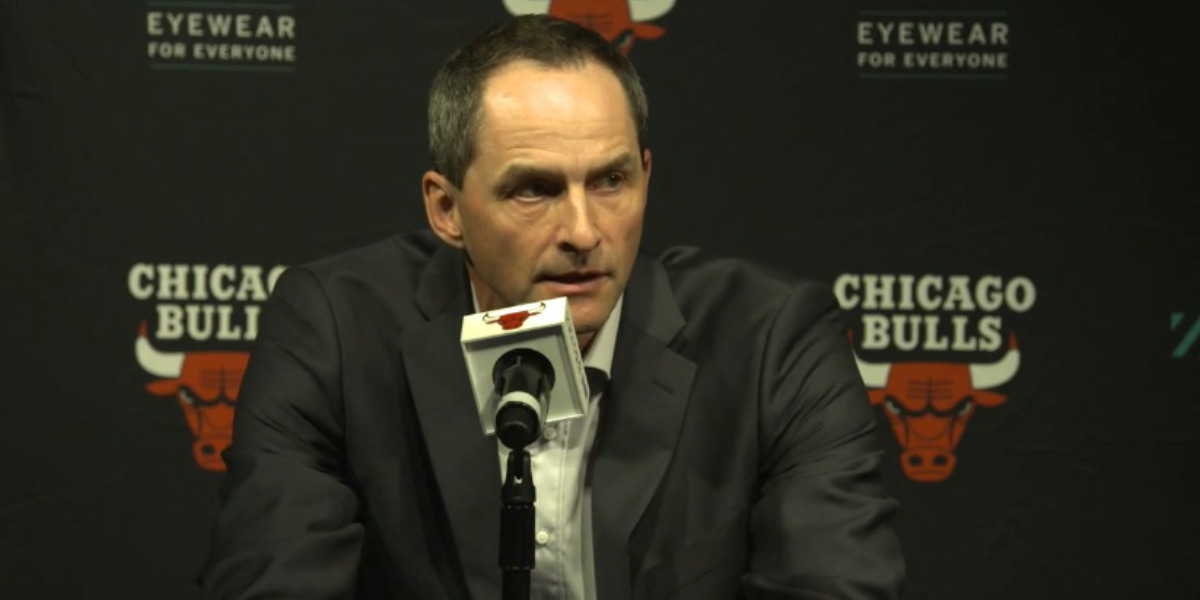 Stuffed with skepticism or optimism, it’s hard not to see the talent on this Chicago Bulls roster.

You absolutely love to see it ❤️ pic.twitter.com/EKeENmq2kE

Media Day was held at the Advocate Center on Monday, and the world got their first look at the team’s new faces in crisp white Bulls jerseys. The interviews, images, and smiles made (arguably) the most active free agency in franchise history a reality. And while there was plenty of excitement that radiated throughout the Advocate Center and through our computer screens, “reality” might be the perfect word to describe Arturas Karnisovas and Billy Donovan’s opening press conference.

Sitting side-by-side, the duo didn’t get up and run a victory lap. While they, of course, expressed optimism in what this new core can accomplish, they were nothing short of realistic about where things stand heading into training camp.

Respect can not be bought, not even with a $200 million offseason. A number of regular season predictions and talking head comments have already reminded us of that. The Bulls might be the most relevant they have been in a half-decade, but relevancy doesn’t equal acceptance, especially when 80 percent of your roster was not on the team at the start of the previous season.

Don’t get it twisted, Karnisovas nor Donovan sounded concerned about the potential challenges that rest ahead, but they also were not going to act like any job was done. Adding talent is one thing, and getting that talent to work together is entirely another. With that in mind, the Bulls head coach was not playing the prediction game.

“It‘s so hard to sit there and make predictions or predict what is or is not going to happen. All I know is that we have a lot of work ahead of us,” Donovan said. “I’m excited about the work because I’m excited about the guys, but for us right now, we’re going to have to see. For me to sit up here and say, ‘ok, we haven’t had one practice or one game with each other’ and to say what we’re going to look like weeks, months from now, it’s going to be hard to say.

But certainly, the expectation is that you want to be able to compete at the highest level. You want to be able to make deep runs in the playoffs … so I’m excited about it because there is a lot of potential and a positiveness to what we can become, but we’re going to have to put the work in to become that.

Put differently, to all those people who have expressed concern about how these new pieces can co-exist, Donovan hears you. Karnisovas does too. They are aware of the work that needs to be put in to make this roster truly competitive, but they also sound ready to make sure that work happens.

Nothing made that point clearer than when Donovan touched on the Bulls’ defense. Built around three players who have been below-average defenders practically their entire career, people have been quick to express concerns about this side of the ball. Meanwhile, Donovan was quick to speak on this in his press conference, refusing to beat around the bush.

“I think that’s where the investment has to be made. I’m not one of those guys that sits there and says, ‘well because Zach LaVine is a really good scorer, so is DeMar, so is Vooch, that we are just going to be able to score.’ I think that’s going to be a work in progress, but I think every day we are going to have to put the physical work into defending … we’re really going to have to make an incredible investment defensively.”

While it’ll sound obvious, it’s still encouraging to hear the right thing said (particularly by a Bulls head coach). The time is not now to look at this roster through red-colored glasses. As exciting as the offseason turned out to be, it’s time to look at the reality of the situation and attack things head-on. The Bulls may have the foundation of a winning roster, but the fact of the matter is they have won nothing yet.

Watch the full press conference with Karnisovas and Donovan below: