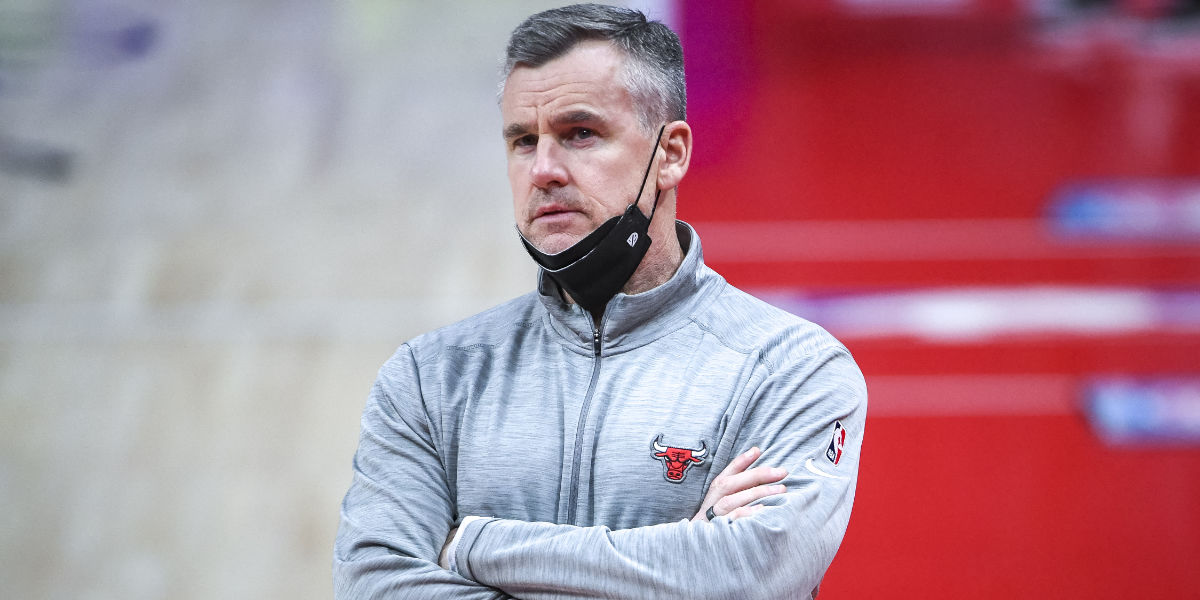 That was real dialogue from last night. I guess she could tell I was thinking about Lonzo to LaVine lobs instead of Bachelor in Paradise.

•   When Arturas Karnisovas and Marc Eversley blindsided the NBA with the hiring of head coach Billy Donovan, they made one thing clear: We want to win. The former OKC coach had decided to leave the franchise under his own terms as they entered rebuilding mode. He was a coach who previously led the Thunder to five consecutive postseasons, including a Finals trip in his first season with the team. In other words, while he may have plenty of experience developing high-upside talent from his days as a widely successful college head coach, he wanted to shoot for the postseason … not the lottery. With that in mind, his long-term contract with the Bulls alluded to a quick turnaround, one that (right on cue) we saw come to fruition this summer.

•   “Overachieving” became a staple of Donovan’s while he was with the Thunder. Year after year he proved to be a playoff constant despite a carousel of superstars and continuous roster turnover. Sure, having names like Kevin Durant, Russell Westbrook, Paul George, and Chris Paul make playoff berths easier to come by, but it’s still on Donovan to fit the pieces around these differing All-Stars and form the right rotation. All things considered, he struggled to do that in his first year with Chicago, but we also have to admit he didn’t have much to work with, right?

•   Now, Donovan not only has a much-improved roster but one he likely helped create. Part of the allure in signing with Chicago appeared to be the role he could play in the decision-making process, and I’m now very excited to see the kind of competitive stability he can create with his roster, especially around the margins. While all the focus will be on names like Zach LaVine, DeMar DeRozan, Nikola Vucevic, Lonzo Ball, and Patrick Williams, Donovan could have the greatest impact on guys like Troy Brown Jr., Derrick Jones Jr., Alize Johnson, and Tony Bradley. After all, turning young, athletic, confusing talent into consistent role players who impact winning became a specialty of his in OKC.

•   Think about these names: Luguentz Dort, Darius Bazley, Hamidou Diallo, Abdel Nader, Alex Abrines, Terrance Ferguson, and Andre Roberson. None might be currently achieving anything spectacular at the NBA level, but Donovan made the most of them while he was in town. And one way he did this was by focusing on the defensive end. Each of the players listed above all recorded a season as a plus-defender during their time with the Thunder. Yes, the team’s general defensive competency likely helped, but they were all guys Donovan taught to create havoc on that end of the floor. I don’t know about you, but that feels like the perfect kind of role for the Bulls’ new bench mob. We all know the Bulls will need it.

•   PRINT THIS CONTENT OUT FRAME BY FRAME, PUT IT IN A BLENDER, AND INJECT IT INTO MY VEINS.

One week until our first pre-season game! 👀 pic.twitter.com/YgDhdy4BbF

New Bulls in the Kobe 6. pic.twitter.com/gENPzfZyKg

•   As you can see, I’m having a hard time tempering my expectations as training camp tips off. But, come on, cut me some slack! Seeing this much talent on the floor at the Advocate Center is like seeing the nerd show up jacked to prom. There has been a complete 180 in talent from the last offseason, and these photos make it all finally feel so damn real. That alone is probably worth celebrating.

•   We got some positive updates on Coby White and Patrick Williams on the first day of training camp, which you can check out here. NBC Sports Chicago’s Rob Schaefer also spoke with White about his recovery from shoulder surgery, which is worth a read below. White shared that he has started to do practically everything on the court, including dribbling and shooting, but he is still fighting some discomfort with certain shots (i.e layups).

•   ICYMI: The Chicago Sky stole Game 1 of the semifinals last night from the No. 1 seed, and Courtney Vandersloot had an absolutely unreal performance.

Courtney Vandersloot had no idea she had a triple double until Holly Rowe told her, her reaction is great pic.twitter.com/jdlTSq8RXb

Thank you @canadagoose for making sure I stay warm during the Chicago winter 🥶❄️! pic.twitter.com/OqITMjDNa7

A Nuanced Conversation About Firing Matt Nagy — How? When? Why? And What Comes Next?https://t.co/fGmuKcV7t9 pic.twitter.com/Ipe2BWNCip