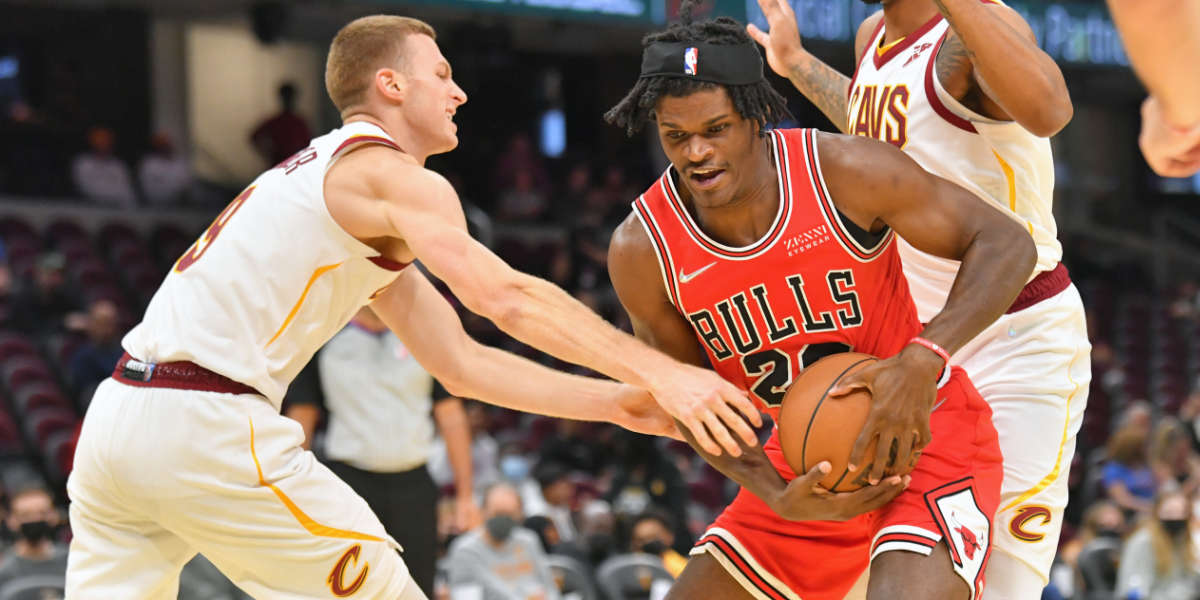 As a wise man once said: “You only get one shot, do not miss your chance to blow, this opportunity comes once in a lifetime.” I think it was Aristotle? No, Socrates!? Someone like that.

For six players on the current Chicago Bulls roster, that line should be front and center in their cranium.

•   Alize Johnson, Stanley Johnson, Matt Thomas, Ethan Thompson, Daniel Oturu, and Tyler Cook are all on non-guaranteed deals as we head into the final week of training camp. The Chicago Bulls have only two roster spots remaining, as well as one two-way contract to pair with Devon Dotson. While we don’t truly know what’s going on behind the scenes, the only player to prove he is worthy of a roster spot so far is the one we all expected: Alize Johnson. He may be one of the most inexperienced players of the bunch (49 career games), but it hasn’t shown on the court.

•   Alize’s 48 minutes are 7th-most on the team thus far behind only the starters (which includes Javonte Green) and Alex Caruso. He has shot 10-14 from the field over his first three games while hauling in 31 rebounds total. For reference, that puts him three rebounds over Vucevic, and he also leads the team with an impressive 10 offensive boards. I still expect to see Tony Bradley as this team’s primary backup center, but Alize has quietly made a case to eat real minutes in a small-ball look. The physicality he has demonstrated around the rim and relentless energy on the glass could prove pivotal at times for this undersized frontcourt.

•   Assuming Alize easily takes one of the final two roster spots, that leaves quite the interesting situation at No. 15. Many expected Stanley Johnson to make the roster (myself included) due to his proven defensive play and useful length. However, after watching his first three appearances, I’m beginning to question whether or not he can make the final cut. While Stanley has played the 9th-most minutes for this preseason Bulls team, he saw only 7 minutes of action last night. His offense has continued to be borderline disastrous (3-11) and with guys like Derrick Jones Jr., Javonte Green, Troy Brown Jr., and even Alize showing good signs on both ends of the floor, the need for his potential feels diminished.

•   I still think you can probably do worse than having Johnson as the 15th-man, but the alternative could be to extend the stay of specialist Matt Thomas. The 3-point marksman has looked serviceable in his few stints on the court. His 3-point shot may not be falling at the highest clip (only 4-13 to start the preseason), but the expectation is that will level out (41.0 percent 3-point shooter in his career). As for Oturu, Thompson, and Cook, I can’t imagine either make a real case for the final two roster spots. Maybe one of them showed enough behind the scenes to earn a two-way, but the organization might try to push all three toward signing with the Windy City Bulls. We’ll see … one more game to prove it!

•   Head coach Billy Donovan has stuck to his word and ramped up the minutes for the normal starters over these first three games. Here is how each guy has fared so far:

•   I’ll be interested to see what approach Donovan takes for the final game. Does he expect to give them all a full workload or will he turn back the notch a bit in anticipation for the season-opener on October 19th? The team has until Friday to prepare, but I wouldn’t be too surprised if we see things dialed back as the front office and coaching staff takes a greater look at some of the reserves and training camp invites discussed above.

•   Seriously, Lonzo Ball deserves a ton of respect for the way he has refined his jump shot. I will not harp on this too long since I’ve brought it up before, but the fact he has gone from a 30.5 percent 3-point shooter during his rookie season to a nearly 38.0 percent clip on high volume (8.3 attempts last season) speaks volumes about his ability to keep improving. FWIW: He is shooting an electric 52.9 percent from behind the arc right now and 48.3 percent from the field.

•   By the way, I’m glad last night’s game was close. The starters were able to reel things in before they checked out for the night, but this group needed to experience what it’s like when the shots are not falling. At first, things got a bit stagnant and sloppy (recorded fewest assists in the preseason thus far with 18 and also had 17 turnovers), but I thought they did a solid job locking in on the defensive end to generate easier shots in transition. The defensive-minded lineup Donovan turned to with Ball-Caruso-LaVine-Jones-Vucevic helped generate a quick 9-0 run at the end of the third to give the Bulls the lead. All things considered, it’s nice to be able to turn to that defensive versatility off the bench.

•   Make sure you’re caught up on all things Blackhawks before the season starts on Wednesday!

Gus Is Back, Trimming the Roster, NHL Eve, and Other Blackhawks Bulletshttps://t.co/F2MnrjfQZk