It's a New Season and a New Team ... But It's the Same Awesome Zach LaVine Skip to content 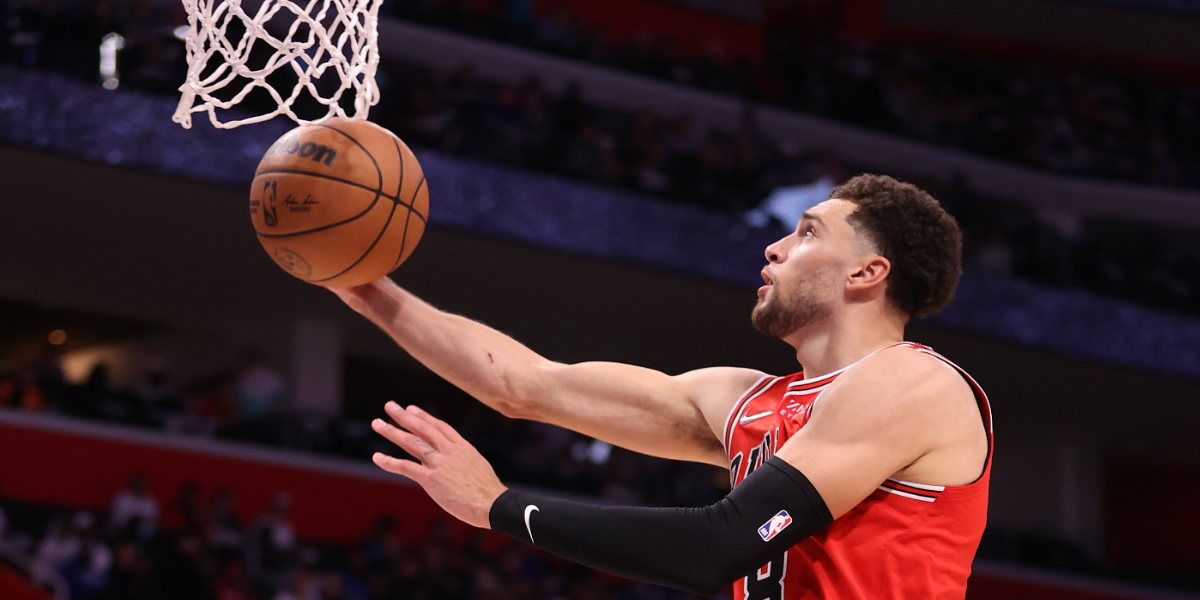 When Zach LaVine walked off the Little Caesars Arena court with 34 points and a victory in his back pocket on Wednesday night, DeMar DeRozan thought nothing of it: “I’m not surprised,” DeRozan told reporters with a shrug after the season-opening win. “I was expecting it. I’m not surprised at all.”

While this was DeRozan’s closest encounter to a Zach LaVine Bucketfest, why should he be surprised? All he saw in Game 1 was the same player he saw last season. The same player he decided to join forces with only a couple of months ago.

LaVine finished as the league’s 7th-leading scorer during the 2020-21 season. He was the only player to average at least 27.0 points per game on at least 50.0 percent shooting from downtown and at least 40.0 percent shooting from behind the arc. The efficiency in which LaVine scored the basketball was almost unmatched, and he did it all with a usage rating that sat in the league’s 96th percentile, per Cleaning the Glass.

While the performance earned him a fresh batch of respect around the league, one question still snuck up: Could he do it again? The addition of fellow high-usage scorers like DeMar DeRozan and Nikola Vucevic left people wondering what kind of Zach LaVine the team would see this season. He had never played alongside such capable scorers – ones who had been No. 1 options in their own right for much of their career. Theoretically, more help means easier buckets, but would his all-around opportunities diminish? Would he still fight for a spot among the league’s top-7 scorers?

A hot start for Zach LaVine 🔥

If last night’s 34-points performance was any indication, Zach LaVine is not only the same efficient scorer he was last season, but he is still the No. 1 option and bona fide leader of this Chicago Bulls team.

The 26-year-old dropped his 34 points behind an 11-17 showing from the field and an 11-11 performance from the free-throw line. He scored 23 of those points in the team’s second-half comeback effort, including three perfect trips to the free-throw line to ice the game in the final minute. Call him old reliable.

With that said, make no mistake, for LaVine to be the same player this season … he does have to be different (*brain begins to hurt*). The addition of an ISO scorer like DeRozan and a facilitator like Lonzo Ball will mean more off-ball play for the scoring guard. He will have to hunt cutting lanes, get out in transition, and nail catch-and-shoot 3s. All of that should make LaVine’s life easier, don’t get me wrong, but it’s still a pretty different role than we saw him play in previous seasons, and he will need to adapt.

Likewise, there is a difference between leading a group of losers and leading a group of winners. This roster is built to win ballgames for the first time since LaVine arrived in Chicago, and his job is to make sure it does just that. No doubt, that feels like a big ask for someone who has yet to sniff the postseason, but I guess Billy Donovan doesn’t seem to think so.

“I think he’s grown,” Donovan told reporters after Wednesday’s game. “Listen, the shots he made and the things he does athletically and talent-wise, I think people have seen that for years out of him. I think he is looking at things through a different lens. And I said this a week or so ago, his voice is there. There is a different message coming from him in a really really good way. I think he sees things in a different way now.”

The head coach mentioned last season’s All-Star break and this summer’s Olympic games as two events that had a strong impact on the player LaVine is today. And it’s hard not to believe that. Those are two experiences where LaVine finally played alongside talent that has succeeded at the highest level. Seeing how those players go about their business and approach the game daily can change everything for a player who is as gifted as LaVine … which brings me back to my initial point.

The upside and raw talent have been there for LaVine. That hasn’t changed. The player we saw take the floor last night is the same player we saw average 27.0 points last season and attract big names to the organization this offseason. LaVine is the same No. 1 option and the same go-to guy he has always been; he is now just ready to do it on an even bigger stage.