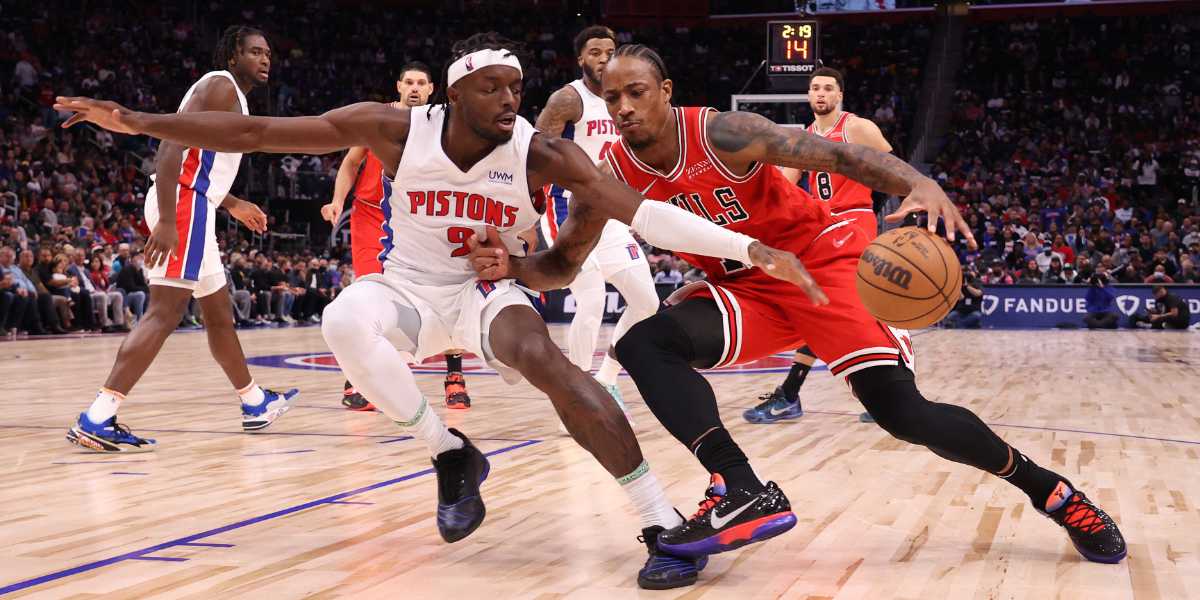 Imagine there was a defensive-lineman-sized robot that raced in your direction every two minutes, before coming to a sharp stop an inch before hitting you. All you’re told is that – eventually – that robot will make contact with your body. The question is whether or not that contact will be a brutal tackle or a big old comforting bear hug.

I think that best describes the mental stress I was under during last night’s season opener. (Michael: Is everything okay at home, Eli?)

While I tried my best to sit back and enjoy the show, I found myself far too invested in every possession. Every time it felt like Chicago could blow the doors off the arena, they were either met with a missed open look or a Detroit answer on the other end. When the last 5:00 minutes appeared on the clock, I didn’t know whether or not I’d be left on my back with the wind knocked out of me or relieved that the new-look Bulls didn’t start the season with the ultimate dud.

Fortunately, it was the latter.

The Chicago Bulls are 1-0. pic.twitter.com/TaYyEVJGe4

•   Considering the first four preseason games were basically two-hour-long highlights reels, no, I didn’t think the Chicago Bulls would come out shooting 43.0 percent from the field and 30.4 percent from downtown on opening night. I guess it is just a reminder that preseason is just that: the preseason. And no matter how much chemistry was built over those exhibition contests, real progress will have to be made on the regular-season court. As the Pistons hung around and the Bulls bricked shots, the free-flowing attack we saw in the preseason sputtered into stagnant ISO ball and overall offensive confusion on a handful of possessions. And when the Bulls did get the high-percentage looks they wanted, they failed to execute time and again. The team went a dismal 28-50 on shots within 10ft of the basket, according to my shot-chart peeking. Nikola Vucevic, who finished an icky 7-21 from the field, missed 10 of those shots.

•   Now, the encouraging news is that the Bulls still came out on top, and I think Billy Donovan was right to point that out early in his postgame press conference.

“I was very happy we gave ourselves a chance to win not playing very well on offense. That, for me, is the positive,” Donovan said. “I think a lot of times when people sit there and say, well, ‘you’re going to score, you’re going to score,’ this is the hardest part for us to figure out because they’re all used to offenses running through them.”

•   Not only is this offense going to take time to gel, but good teams find a way to overcome their own mistakes. Chicago did that last night by locking down on the defensive end and winning the points-off-turnover battle (22-15). While the Bulls tied the mark, they still forced the Pistons into 17 turnovers. They also recorded 19 deflections, which was tied for the 4th-most in any opening night game. Everyone looked locked in on that end of the floor, and it all started with Lonzo Ball and Alex Caruso. Ball, despite finishing with only 12 points and 4 assists, walked off the Little Caesar Arena court with a game-high +17 on the night. Meanwhile, Caruso recorded four steals and two blocks.

•   The kind of energy both backcourt players bring to the floor is contagious. Zach LaVine was flying around grabbing 7 defensive boards and blocking 3-point shots (yes … that actually happened). Hell, even DeMar DeRozan looked to be hauling ass on that end with 3 steals and 7 of his own defensive rebounds. We have to see this level of effort and execution continue against the higher-level competition, but this team saw that defense can win you even the sloppiest of games.

“Just finding our rhythm. We play solid defense and later on start finding our rhythm, so as long as we come with our energy and play on both ends on the court our offense will find its way,” LaVine told reporters after the game.

•   Seriously, I got to give mad props to DeMar DeRozan. While he didn’t have the most efficient scoring night, he looked like the veteran presence LaVine has been dying to have next to him in crunch time. At one point in the 4th quarter, DeRozan nailed the catch-and-shoot 3 (Reminder: This man has shot very few 3’s the past several years) before hustling back on defense to force the turnover that ultimately set the Bulls up to take the lead. The sequence went completely against the main critiques of DeRozan’s game.

•   I know we’re just talking about one game, but last night showed that this team needs Coby White. The second unit for the Bulls was outscored 32-10. Ayo Dosunmu had the most points off the bench with 7, and four of those points came off rather easy layups (I mean that as no disrespect, they were pivotal layups). This was always a concern of mine for the bench squad, and it’s a big reason why Donovan has to stagger someone like DeRozan into the group. Adding a player like White back into the mix who can catch fire at any moment will make this team that much more dynamic.

•   Speaking of Dosunmu, a big reason he got extra minutes appears to be because of a mouth issue for Troy Brown Jr.

Billy Donovan said Troy Brown Jr., who has been battling a mouth issue that has left him unable to eat, was available to go. Went with Ayo for “some pop.” Donovan praised his fearlessness.

Where will Ben Simmons play next? 🤔

The final 25 names will be revealed tonight on TNT. #NBA75 pic.twitter.com/J8XzYoePNf

One Draft Analyst Admits His Mistake: I Was Too Low on Justin Fields Before the Draft https://t.co/99z86Y0WaL

•   The Blackhawks are making me sad.