Top of the Standings, Tough Road Trip Coming, Gotta Love the Defense, and Other Bulls Bullets Skip to content 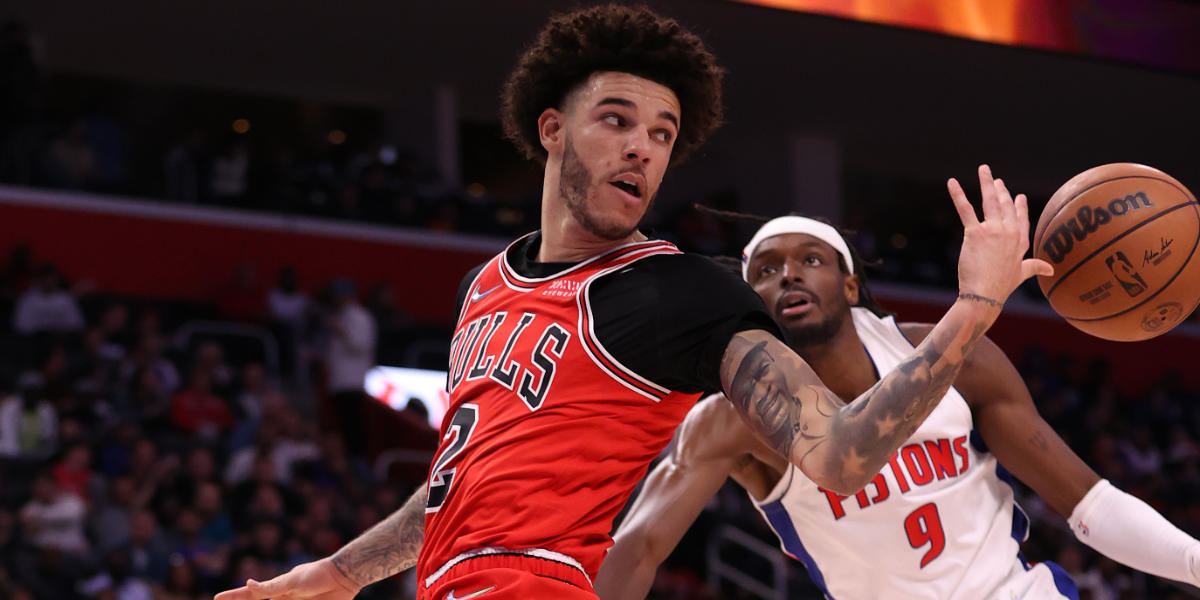 Blast the confetti. Pop the Champagne. Hang the banner. Get a tattoo.

The Chicago Bulls are atop of the NBA standings.

•   As ready as I am to Kool-Aid-man myself through the nearest brick wall after this successful opening week, I can’t help but stare at the upcoming schedule. After a Monday night battle with a banged-up Toronto Raptors team, the Bulls will begin arguably the hardest stretch of their season. Thirteen-straight matchups with playoff-proven teams are on deck, which includes the ever-so-daunting Western Conference road trip where the Bulls will see Luka Doncic, Steph Curry, Paul George, LeBron James, Damien Lillard, and Nikola Jokic all in a row.

•   I don’t point this out to downplay what the team did in these first three games. We all know they have not had a start like this since 2016, and the fact they have been able to look as comfortable and confident on both ends of the floor is extremely encouraging. The team may have been thrown a couple of fastballs right down the middle, but they still needed to show us they could hit them out of the park (#WrongSportMetaphor). They did just that and more. The Bulls didn’t just take care of business against a banged-up Pelicans team and bottom-tier Pistons squad, they held leads as great as 30 and beat them by a combined 31. In other words, Chicago was practically in complete control for the entire affair, producing highlight play after highlight play with smiles on their faces. It was the first important step in looking like the playoff-caliber team they expect to be, The next step: Proving you can keep up with playoff mainstays.

•   If one thing is for sure after three games, poor defensive execution will not come from a lack of trying. The consistent ball pressure and hustle from guards Lonzo Ball and Alex Caruso have arguably been even better than advertised. Both players have helped guide Chicago to forcing at least 17 turnovers over each of the first three contests. On Sunday night, the two combined for 8 of the team’s 13 steals, while Ball also tied his career-high with four blocks. The Bulls now hold the 4th-best defensive rating in the league through their first three games and rank third in opponent turnovers. Small sample

•   One of Ball’s many blocks came against ferocious young big man Isaiah Stewart, and I have no doubt it will be near the top of the team’s end-of-season highlight reel.

A great angle of an incredible Lonzo Ball block pic.twitter.com/YvGu3nyPqb

•   Again, I have no doubt this team cares, but whether or not they can continue to be this frisky against more imposing teams will be the key question.

•   Ayo Dosunmu continued to hold his place among Billy Donovan’s rotation on Sunday night. The Bulls head coach split time between Troy Brown Jr. and Ayo Dosunmu at the wing by handing each 11 minutes apiece. Neither necessarily made their case for more minutes, but the rookie did continue to demonstrate that he can play a role earlier than many expected. Javonte Green has done much of the same. For the first time in his career, he reached double digits in back-to-back games. The Bulls still need their sparkplug scorer in Coby White to balance things out, but they got quite the intriguing, high-energy bench mob taking shape already.

•   SAY IT LOUDER FOR THE PEOPLE IN THE BACK!

•  I know it might be silly, but this little moment (in the context of the first three games) feels like it holds a lot of weight. Not only was there so much talk about the awkward fit of this team, but also about whether or not these two specifically could be legitimate needle-movers. A long way to go, but I’m so happy to see them in a Bulls uniform.

•   HAPPY BIRTHDAY TO THE BIG MAN!