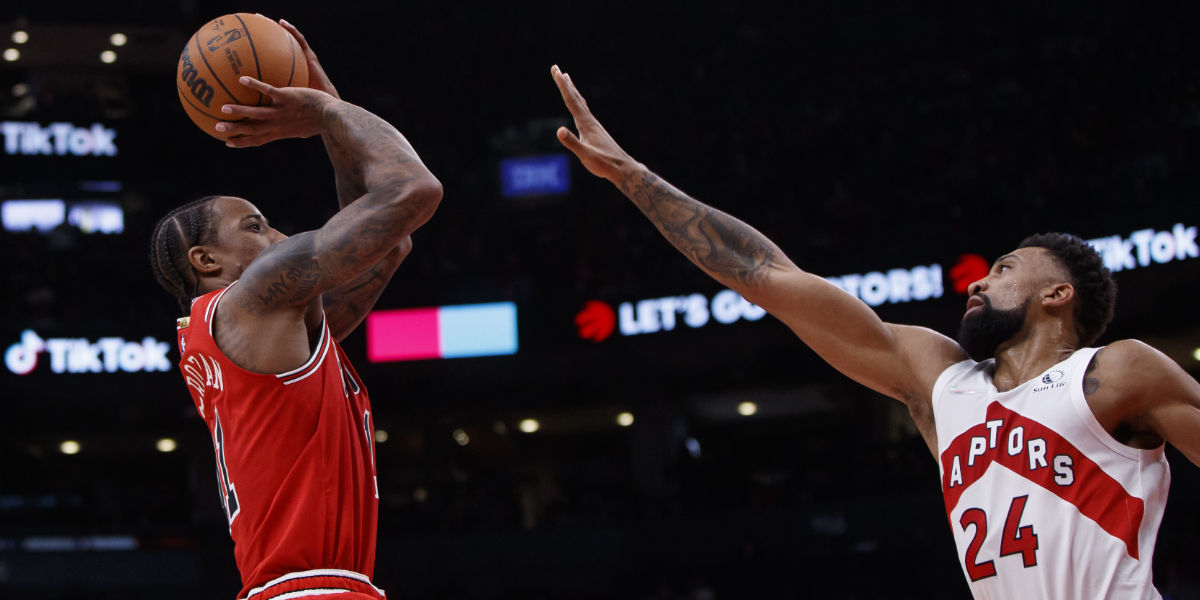 When DeMar DeRozan checked in with 5:09 left in the game Monday night, the Chicago Bulls were in a downward spiral.

The Toronto Raptors were on a 13-2 run and cut the Bulls double-digit lead to just four points. On DeRozan’s first possession back on the floor, he watched Lonzo Ball throw the rock into the hands of OG Anunoby. The athletic wing kicked it into high gear and raced for a fast-break layup that cut the score to 97-95. The crowd lit up in Scotiabank Arena … but so did the dusty DeRozan Bat Signal.

The four-time All-Star grabbed his cape and gave Raptors fans an all-too-familiar show. DeRozan held the ball at the top of the key and waited for the high screen from Nikola Vucevic. He came around and lured the lengthy Scottie Barnes right where he wanted him, nailing the 15-footer. Almost exactly one minute later, it was Anunoby’s turn. DeRozan took him off the dribble to the baseline and sank the turnaround fadeaway to bring the Bulls lead back to 8 points.

And while Toronto refused to go away, so did DeRozan. Gary Trent Jr. drew the assignment with 1:35 left to go as DeRozan called for the ISO. The Bulls cleared out, DeRozan brought Trent 15-feet out, and you know what happened next. Cash. The 32-year-old went on to knock down two big free throws, finishing with 8 points in the final five minutes.

It was the kind of performance that showed exactly why Arturas Karnisovas and Marc Eversley ponied up for the veteran this summer.

“You live for those moments, honestly. I get up for those moments. I love them,” DeRozan said after the game. “Since I was a kid just having that imagination hitting big shots in a dark room. You kind of feed into that when 20,000 fans are out there watching.”

What Bulls fans saw last night is what DeRozan has been doing for years. Last season, in clutch situations (games within 5 points with 5 minutes to go), DeRozan scored the third-most points in the league while shooting 45.2 percent from the field. He also averaged the most trips to the free-throw line and had the second-fewest turnovers among players who ranked top-10 in clutch points.

The results were just as good during the 2019-20 campaign. DeRozan ranked 4th in clutch points and shot the 6th-most free-throw attempts. On top of that, he finished with the fewest turnovers among the top-10 clutch scorers, per NBA Stats. Six of the past eight seasons DeRozan has ranked top-11 in clutch points, so not only is finishing close games something he has plenty of experience doing, but it’s a skill few other players in the league have done better in recent years.

“One hundred percent trust in him,” Lonzo Ball said. “We’re very comfortable with him when he has the ball. We know he is going to make the right play and take us to the promise land.

DeRozan was the only member of the Bulls closing group (which also features Caruso, Ball, LaVine, and Vucevic) to not turn the ball over in the final frame. Instead, he kept his head on straight, played at his own pace, and hunted his spots possession after possession. Compared to what else was going on around him, it was truly a masterclass in clutch offensive play. And, for Bulls fans, it felt like a breath of fresh air after watching this Chicago Bulls finish at least bottom-six in clutch games the past three seasons.

Of course, this isn’t to say the ball should be in the hands of DeRozan in every close game. While he was brought here to help in these big moments and act as a stabilizing force, turning to him in every clutch situation would be resorting back to old habits for both parties. The appeal of the new-look Bulls is the number of weapons on the court. DeRozan’s ability to take the keys for the night is important, but it can not become a crutch for this dynamic roster. The Bulls will be at their best when DeRozan does not have to be his old No. 1-self, and he knows it.