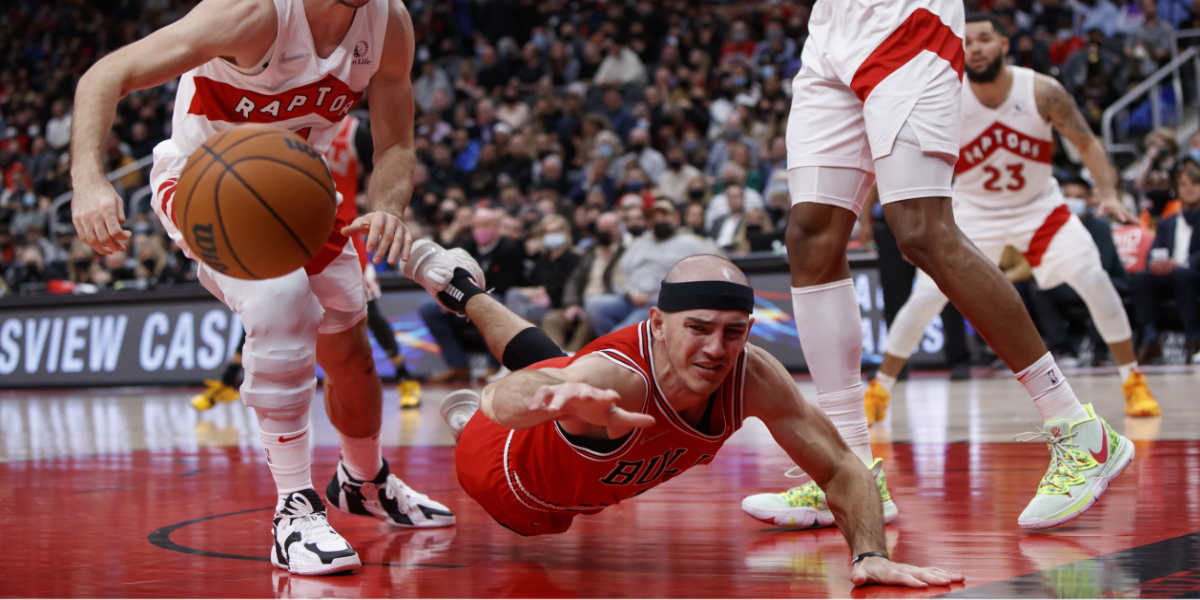 I love being 4-0 for the first time in 25 years as much as the next guy, but I’d be lying if I said I didn’t pee myself a little when I remembered what comes next:

If you thought the first four Bulls games were fun …

Coming out the other end .500 feels like it would be a HUGE win.

•   The Chicago Bulls may not have looked like the star student last night, but at least they passed the test. The Toronto Raptors gave this new-look team a reality check late in the second half after Chicago ballooned its lead to as much as 20 points. As the ball pressure ramped up and the physicality reached new heights, the Bulls were reminded that entering cruise control isn’t an option against most NBA teams. The Raptors dominated the 4th quarter by outscoring the Bulls 28-19 and shrinking the lead down to just 2 points. Of course, the Bulls were able to combat this last-ditch effort and move to 4-0, but there is no question they were left with plenty to study heading into this two-day break.

•    Taking care of the basketball will surely be a topic of conversation in practice this week. While the team finished the night with only 12 turnovers, nine of those costly cough-ups came between the final 1:48 of the 3rd quarter and the final buzzer. The Raptors were able to score 8 points off the team’s 4th-quarter turnovers, which played a pivotal role in their ability to make things a one-score game.

•    Chemistry blips are expected at this early part of the season, but the bulks of these turnovers seemed less about miscommunication and more about struggling with the Raptors on-ball attack. Alex Caruso threw the ball out of bounds while Lonzo Ball missed the mark on passes three times in the 4th quarter. LaVine also lost the ball on a quick behind-the-back dribble move while Fred VanVleet decided to apply a full-court press. Then, while being double-teamed after pushing it up the court, Nikola Vucevic looked like a deer in headlights and dropped the ball right into the teeth of the Raptors defense. Expert Analysis: It was all icky. The rhythm of the game got completely away from this Bulls offense and it caused a domino effect of sloppy play. I know this team likes to move fast, but the Bulls needed to slow things down and rely on their basketball IQ as opposed to athleticism.

•   Fortunately, DeMar DeRozan understood that. The four-time All-Star put the dagger in his former team with 11 points in the 4th quarter and a 5-5 performance from the free-throw line. He continued to play at his pace and was the only member of the Bulls “big-4” not to turn the ball over in the final frame. The performance had past experience written all over it, as did his postgame commentary.

•   The Bulls also got decimated on the glass, by the way. The Raptors walked out of the arena with a 48-28 advantage in that department, including a 14-5 win on the offensive glass. From 9:12 to 4:34 in the 4th quarter, the Bulls were out-rebounded 8-1. Toronto grabbed three offensive boards over that stretch and Chicago’s lead was trimmed to just 97-95. The team was simply out-hustled on a number of possessions, and I can’t help but wonder if a change of pace like Derrick Jones Jr. or Tony Bradley could have helped clean things up. While the size wasn’t necessarily a huge problem against this Raptors team, the physicality clearly was. Perhaps a lengthy more high-flying player like Jones or a bulkier Bradley could have given the team more than the smaller Alize Johnson. I know Johnson has started to build a reputation for himself off his rebound prowess, but he failed to grab even one over his crucial few minutes in the 4th quarter.

•   Hey, at least we get to talk about these problems after a win, right!? The team is still undefeated and the vibes are still pretty damn good. In fact, such a strong start has already (unsurprisingly) boosted the team’s playoff odds, with ESPN giving the team an 81.9 percent chance to make the playoffs! FiveThirtyEight is a little less optimistic, but the Bulls have moved up into the 50 percent threshold. I’ll take it!

•   Chicago also starting to get much more respect in the national power rankings. It’s early, but there is no question the team is making some noise.

•   I never know how to feel about these kinds of records considering how differently the game is played now. But, still, it goes to show that LaVine is making his mark on this franchise year after year!

With this shot, Zach LaVine passed Michael Jordan for 4th most 3-pointers made in Bulls history 🔥 pic.twitter.com/NgB62VnxWO

•   Wow, Markkanen actually made a dunk!

Justin Fields wears it because he's the QB1, but the tape and data points to his surroundings not doing right by him. https://t.co/4BeDMxIeh5

•   While one United Center team rises … the other falls.

The Blackhawks Sell-Out Streak Is Over and Some Other Things Need to End Toohttps://t.co/G4kpxR7AsA

Another Reported Workout for the Bulls, Draft Prospect Comps, the Cavs Sound Busy, and Other Bulls Bullets

NBA Playoffs Update: Warriors Punch Their Ticket to the Finals for the Sixth and Sweetest Time in Eight Seasons

Finally Video of “The Slap,” Tommy Pham’s Side of the Story, and Joc Pederson Has Receipts (UPDATE)