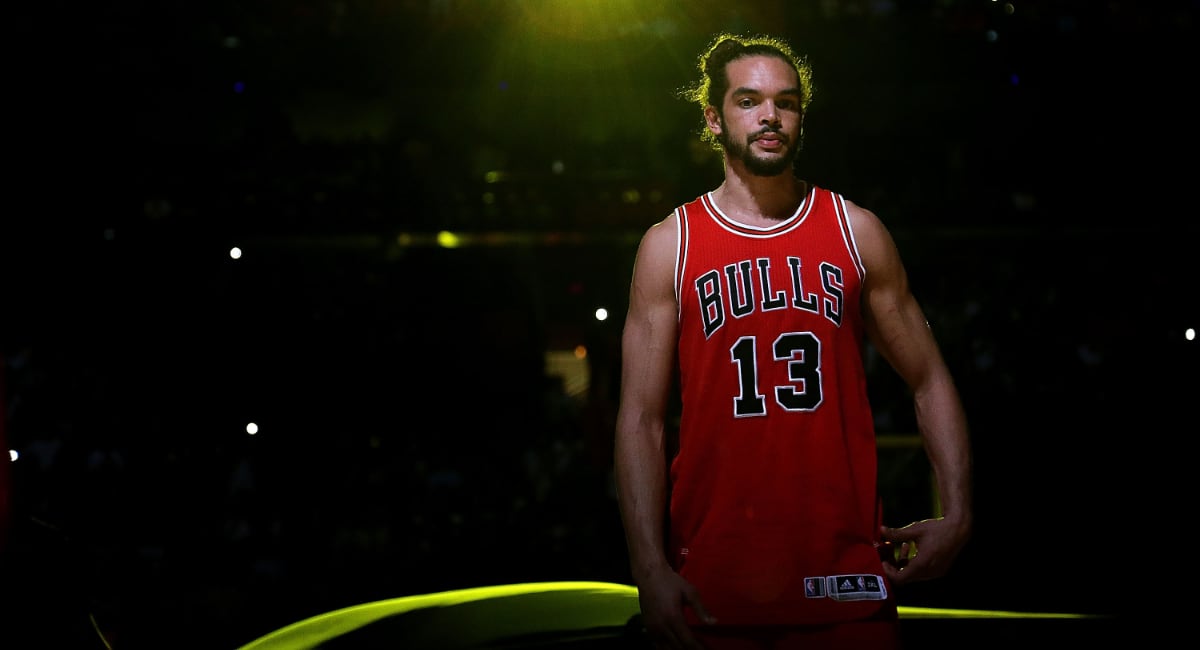 Watching Joakim Noah for nine Chicago seasons felt like being best friends with the Incredible Hulk.

He was an overpowering force who had relentless energy and an unlimited will to smash. While he was never the most coordinated or athletic player, he walked onto the court with an attitude that everyone knew not to mess with. Try to send a missile his way, and it would often end up broken in half and hoisted above a face screaming loud enough to shake the United Center.

But when Noah’s veins were not about to pop out of his skin, he felt like one of the most relatable All-Stars on the planet. Whether he was calling out someone in the locker room for *ahem* passing gas, blasting Cleveland for its un-vacationable (definitely a word) atmosphere, or appropriately labeling Miami’s Big 3 “Hollywood as hell,” Noah felt like he should be seated on your couch busting everyone’s chops with a beer in his hand.

Yes, of course, the actual art of his game was special too. A lumbering presence who never averaged more than 12.6 points per game, Noah shined in ways few players can. He reminded everyone of the importance of crashing the glass and defending the rim on a nightly basis. On the offensive end, he countered this aggressive defensive attack with a somewhat elegant ability to distribute the basketball.

The resume simply speaks for itself:

What makes all these accomplishments feel that much more special, however, is the way he achieved them. His ability to connect to the city of Chicago and channel that relatable-superhero energy is truly what makes him a Bulls legend. For generations to come people will remember Noah because he made it nearly impossible not to. He bullied his way through our sternum and up to our hearts before wrapping it in a big sweaty hug. And, hopefully, he will feel what it’s like to be hugged back tonight at the United Center.

In case you missed it, the organization has already released a massive tribute video for the Bulls legend, and I encourage you to watch it roughly 10 times.

The Joakim Noah Tribute Video Is Out and It’s Awesomehttps://t.co/cyv1r363Yy pic.twitter.com/hIYK9QPeCd

•   The Joakim Noah content does not stop there … and nor should it! Nothing demonstrates his rare ability to resonate with people around the league more than the sheer number of stories and posts we have seen about the big man this morning. I’ll drop a bunch of links below so you can continue your Noah binge.

When Joakim was on the Bulls, he’d rave about his guy “Billy D.” @darnellmayberry wrote about Donovan’s bond with Noah: https://t.co/R09hQh4akE

I spoke with @JoakimNoah ahead of his tribute night tomorrow at the UC against Thibs and the Knicks. We’ll feature his @NoahsArcFdn on @WGNNews at 5.

Here’s Jo on returning to the UC tomorrow and what Chicago and #Bulls fan mean to him: pic.twitter.com/lE6DdvIObA

Noah was a senior at prep school and the Gators were one month removed from an upset loss in the 2004 NCAA Tournament.

“He was really upset and bothered the way we lost.”

•   I want to give one specific shoutout to Zach Lowe’s piece on the Bulls big man. Not only is his story on Noah’s career filled with incredible nuggets, but it does a tremendous job of illustrating just how intense and different he continues to be. Lowe also recorded a full podcast with Noah, and I encourage you to listen to that for even more goodies.

"That's dirty work s—. I'm really proud to be the guy who did that dirty work for the Chicago Bulls." On Joakim Noah day, a look back on it all: the highs and lows, the struggles at the end, Heat-Bulls, Florida, every part of a great career: https://t.co/G6J5h8a7te

•   Believe it or not, there is also a game tonight, and that game is a pretty damn good one! A Knicks team anchored by several former Bulls will look to ruin the home team’s undefeated start. Not only does this feel like the potential rebirth of a once long-standing rivalry, but it is the first significant test for this new-look Chicago team. New York broke out of their rebuild last season with a 4th-place finish in the Eastern Conference, and they now represent a legitimate playoff contender against whom Chicago must prove they can stack up.

•   The Knicks have not started the season off as the same rambunctious defensive unit they were last season, but that actually could be for the better. The team has been far more balanced early on with an offensive attack that carries the 4th-highest effective field goal percentage in the league. The team has also averaged the second-most points per game through their first four games, whereas the Bulls sit (surprisingly) at just 19th. Don’t get me wrong, though, the defensive foundation is still there. New York is currently averaging the 4th-most blocks a night and has allowed the fewest points in the paint. So … yeah … the Bulls will have to be firing on both ends to stay undefeated tonight.

•   Fortunately, the recipe to do just that is there. We all know there is enough firepower to keep up with almost any team in the league on offense. While things have not necessarily been in the best rhythm thus fair, a breakout feels on the horizon, especially after the recent play of DeMar DeRozan. The defense will be the bigger question. Billy Donovan has gotten his unit to show complete buy-in on that end of the floor (currently 2nd-best DEFRTG in the league), but can they continue to execute against the much steeper competition?

•   I’d be lying if I said size does not concern me, particularly in this matchup with players like Julius Randle, Mitchell Robinson, Taj Gibson, and Obi Toppin. The Bulls have allowed the 10th-most points in the paint thus far, as well as the 10th-most rebounds per game to their opponent. I can not help but wonder if Donovan needs to turn to a more traditionally-sized five in Tony Bradley. So far Alize Johnson has been the primary back-up to Vucevic, and while he plays with great energy and allows for a more switchable defense, I would not hate to see what it looks like to get Bradley in there for a few minutes. Also, Patrick Williams is going to draw one hell of an assignment tonight in Randle. Wishing him the best.

•   Oh, and how Zach LaVine looks tonight will be a massive storyline.

REPORT: Zach LaVine Has a Small Ligament Tear in His Thumbhttps://t.co/evkSHnj9BS pic.twitter.com/ut5WuDblxe

•   Things continue to sound “not ideal” for the 76ers, who the Bulls play twice next week,

.@ramonashelburne on Joel Embiid playing through injuries (via NBA Today).

"He told me after this game in New Orleans, he couldn't walk for two days." 😳

•   If we think he is headed out after this season … then do it.

Yeah, the Bears Should Probably Be Talking Allen Robinson Trades (But I Guarantee They Aren’t!)https://t.co/AazOhgejMo

•   Patrick has done a great job over at BN Blackhawks covering the worst of circumstances. Make sure you check out the work he has done if you haven’t already.