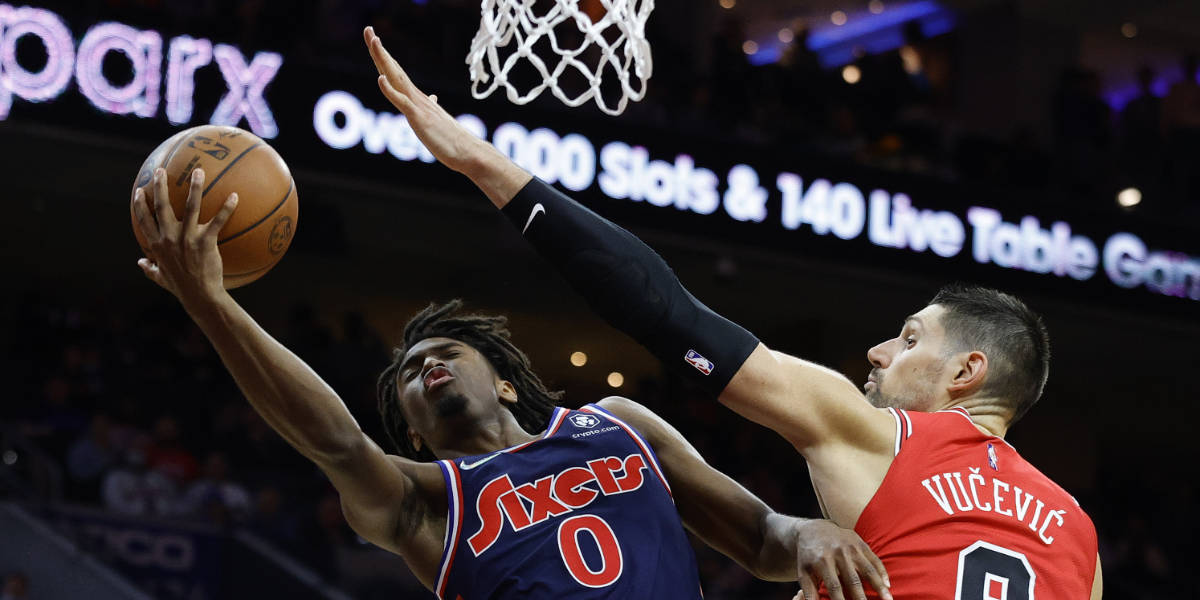 Revenge tastes that much sweeter when it’s on your home court!

The Chicago Bulls will face the Philadelphia 76ers for the second game in a row tonight. When the two met on Wednesday for the first time, the Bulls found themselves in familiar territory down an annoying 18 in the second half. Fortunately, much like they did one game prior against Boston, DeMar DeRozan and Co. were able to completely erase the deficit in the final frame. However, unfortunately, the superstardom of Joel Embiid, and the strong play of the 76ers’ bench, proved too challenging for the Bulls to overcome (and we talked way more about that here).

Still, the good news is the Bulls (once again) showed they have what it takes to hang with the big boys of the Eastern Conference. And their comeback effort suggested they should be able to finish on the right side of the box score with a more balanced effort tonight.

•   I got to say, the fact Matisse Thybulle has been added to the injury report also doesn’t hurt the team’s chances to stave off their first losing streak of the season. According to Keith Pompey of the Philadelphia Inquirer, Thybulle entered the NBA’s health and safety protocols this morning. He is now the third 76ers player to enter protocols, joining Tobias Harris and Isaiah Joe. Meanwhile, Danny Green and Furkan Korkmaz are also both listed as questionable on the injury report with differing bumps and bruises.

•   While breakthrough cases are always possible, this feels like a good time to note the Bulls have put themselves in the best position to avoid COVID-19 complications. We learned earlier this week the team has finally reached a 100 percent vaccination status.

•   The absence of Thybulle is a pretty significant storyline heading into tonight’s game. One of the better young defenders in the league, Thybulle gave Zach LaVine quite the challenge in their first meeting. The All-Star may have still finished with a 27-point outing, but Thybulle helped hold the athletic scorer to an 0-5 performance from the field in the 4th quarter. NBA dot com’s matchup data also had LaVine shooting just 3-11 and committing four turnovers with Thybulle guarding him (h/t Rob Schaefer). So remove the lengthy Thybulle from the equation, and life should only become that much easier for the Bulls’ best player.

•   Let’s also hope the entire team takes better care of the basketball tonight. Both LaVine and Lonzo Ball finished with 5 turnovers, while DeRozan added 3 of his own (all three combined for 6 in the final quarter). The Bulls’ 16 total turnover was their most in a single game since opening night, and while they were able to combat this sloppiness by forcing 14 Philly turnovers, taking care of the basketball is something this team takes pride in (have committed six-fewest TOVs per game so far this season).

•   I placed an order for more Vooch, and I’m really hoping it arrives by tonight. The big man’s four points on Wednesday night were his fewest since November of 2019. Vucevic scored just four points on a 2-7 showing from the field, and while Embiid has the ability to shut guys down with his size and athleticism, there is still no reason for a fellow All-Star center to be that absent on the offensive end. The Bulls not only need Vucevic to be more aggressive in getting to his spots but head coach Billy Donovan needs to find more creative ways to get him in an early rhythm. Whether that be handing him a few more post-up attempts or creating even more pick-and-pop opportunities, everyone will need to contribute to finding Vucevic some easier looks. The sooner he is his normal self, the more dangerous this Bulls team becomes.

•   For more on Vooch’s shooting slump …

We keep on waitin’ … https://t.co/Sw1MlgoDEn

•   The Windy City Bulls season starts today, and you know what that means: MARKO SIMONOVIC BUCKETS!

Good luck to @windycitybulls as they open their season tonight on the road! pic.twitter.com/mSVWAvcQMp

•   The Chicago Bulls are such trend setters!

The Clippers trailed by as many as 21 points and beat the Timberwolves by 20. They're the 4th team in the last 25 season to trail by 20 and then win by 20.

It's the first day in the last 25 seasons in which multiple games saw both teams lead by 20+ points. pic.twitter.com/cOGN6OaUNh

•   I was at this game last night, and I have one thing to say: Derrick Rose still got it.

The Knicks had a 43-point swing against the Bucks 🤯

They outscored the bucks 94-60 in the final three quarters. pic.twitter.com/tGnCONaa0S

•   Can we send everyone to Rockford? At least they’d dominate that league!

•   We are waisting an Allen Robinson season, and it’s a bummer.

At least there is a sensible explanation as to why the Chicago Bears didn’t trade Allen Robinson II at the deadline. https://t.co/82GaudmILR