Another Dominant 4th Quarter, Props to the Bench, DeRozan's Shooting, and Other Bulls Bullets Skip to content 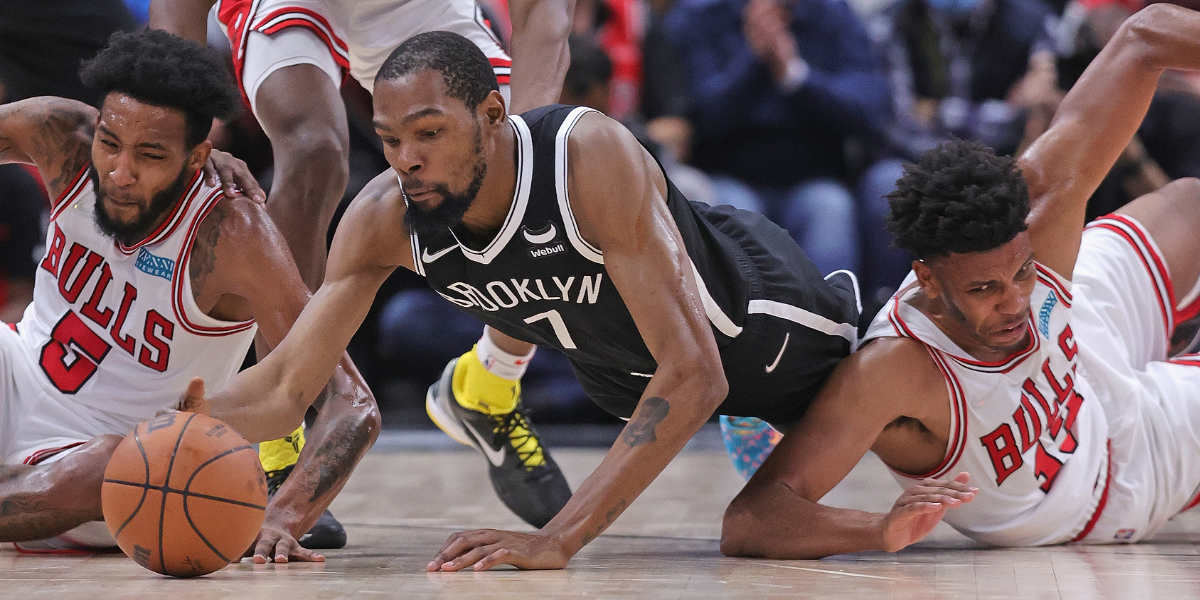 I would not consider myself someone who likes surprises. Not only do I never know the appropriate way to react (what do I do with my hands!?), but sometimes building up suspense is actually better than having something unexpectedly thrown in your face. Now, with that said, I will happily give the Chicago Bulls a pass for last night.

I’d be lying if I said I thought the Bulls would walk away victorious on Monday. While the team has certainly impressed me this season, I still wasn’t ready to comfortably project a victory over the Durant-Harden Nets – who were winners of five straight – on national television. However, here we sit with a coffee in one hand and a celebratory cigar in the other (no? Just me and MJ?) after another dominant 4th quarter where the Bulls showed they can hang with the best of the best. I could get used to this.

•   A forgotten key to last night’s game: The strong start. For only the fourth time this season, the Chicago Bulls were able to walk away from the first quarter with an advantage. Sure, the second quarter may have been a catastrophe that resulted in a 30-16 swing, but that effort in the first frame still gave this prone-for-stagnation Bulls offense a much-needed cushion. The Brooklyn Nets were never able to extend their lead past 8 points, which means this is only the second time in the last six games that the Bulls were able to avoid a double-digit deficit.

•   The team’s six players in double-figures also played a critical role in keeping this Bulls team within reach. Every starter added at least 11 points to the board, while rookie Ayo Dosunmu added a career-high 15 points off the bench. It was only the second time this season that six Bulls players recorded 10 or more points, and it was this kind of balanced attack that allowed the team to steal the show in the 4th quarter.

Bounced back with a 42-point 4th quarter and the WIN.@Therabody | #BullsNation pic.twitter.com/VYCFluIXMr

•   After a 42-17 domination in the final frame, the Bulls have now outscored opponents by a league-high 67 points in the 4th quarter over their previous six games. The next closest teams over that stretch are the Magic (44) and Kings (43). Overall, the team’s Net Rating in the 4th quarter this season is by far the highest, which is a significant change from the 4th-worst ranking we saw last season. So what makes this new team so damn good in crunch time? Well, the fact DeMar DeRozan is proving to be one of the best closers in the game doesn’t hurt (averaging most points per 4th quarter among players who have appeared in at least six games), but I think it has even more to do with the team’s levelheaded approach.

We kept attacking. We kept getting out into transition. We kept making everything tough on them. The last couple of games kind of haven’t been to our liking. You got to kind of have to carry that over and understand that in the 4th quarter, we don’t want that same outcome. We stayed aggressive.

•   Every team goes on a run, and it’s how you respond to that run that matters most. The Bulls have proven they can stay the course when their back is against the wall. Instead of the panic we saw set in many times last season or the stagnation that would quickly occur as all hope fell on LaVine shoulder, this new team is able to get contributions from across the roster, and it has made them one of the hardest teams to get rid of in the league.

•   While Dosunmu offered the biggest spark offensively, everyone on the Bulls bench deserves a round of applause. Depth was always a question mark heading into this season, and the team still has their holes to fill, but there is no question this Bulls’ second unit is working wonders. The ability they have to wreak havoc and tire out the opposing team with their athleticism and length is noteworthy. Last night, Derrick Jones Jr., Tony Bradley, Alex Caruso, and Ayo Dosunmu all finished with at least a +8 performance. On the season as a whole, that four-man combination has a ridiculous +47.5 (per 100 possessions), per Basketball-Reference. Of course, that is not at all sustainable and it’s a small roughly 26-minute sample size, but that’s still an encouraging start.

•   When you’re tracking with the Warriors, Heat, and Jazz, something is going very right.

Through games on Nov. 8, how has your favorite #NBA team fared on both ends of the floor during the 2021-22 season? pic.twitter.com/udYx4SFBo3

•   DeMar DeRozan may not be shooting a high volume of 3-pointers, but the fact he is shooting them at all is a huge difference from the last few seasons. The 32-year-old is currently 39.1 percent from behind the arc while averaging 2.3 attempts per game. For reference, he only made 19 buckets from behind the arc last season (shot 74), but he has already made 9 (of 23) this season (4-5 in the 4th quarter). Anyway, I wrote way more about his past stats and comments on the matter here.

•   Fun Fact: The Bulls are 7-3 without arguably one of their most important players.

SURPRISE: Coby White Has Been Cleared to Practice!https://t.co/SfyvtuFxAS

•   ICYMI what happened in the Nuggets game last night, check out our post from this morning here.

Heat players were waiting in the hall for Nuggets players last night 😯 pic.twitter.com/UdInJbi0nr

•   The Bears may not have given Chicago the 2-0 night it wanted, but they still made some important strides.