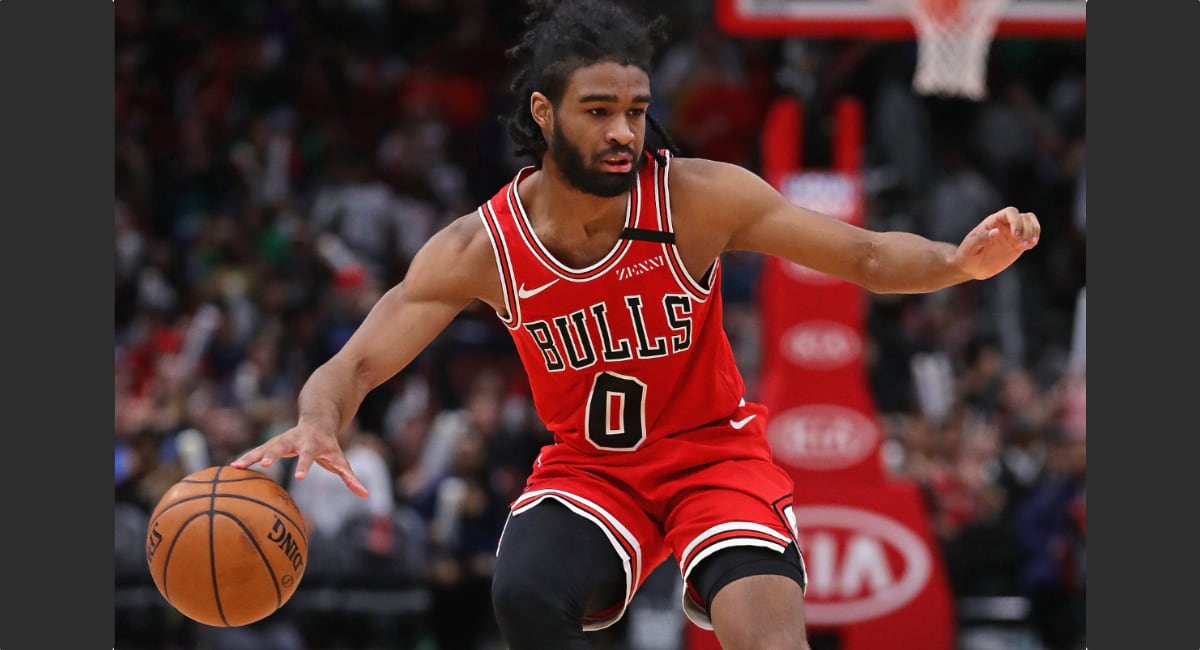 Despite grinding out a 100-90 victory over the Los Angeles Clipper on Sunday night at the Staples Center, the Bulls had a problem offensively. It was largely apparent when DeMar DeRozan was playing with the second unit that the Bulls were lacking scoring depth at that level. As a result, the Clippers were dedicating double teams to DeRozan almost every trip down the court, daring the Bulls to beat them with someone else on the second unit, a call that went largely unanswered.

It wasn’t until Zach LaVine came back into the game in the fourth quarter that the Bulls were able to pull back ahead and close out the Clips, but the return of third-year guard Coby White should help the Bulls find some points from the second unit.

White, 21, has been sidelined since suffering a torn labrum during the offseason and undergoing surgery to repair that injury on June 10. However, White returned to practice last week and has worked in five-on-five drills without setback since then. Bulls head coach Bill Donovan said that White would play tonight against the Los Angeles Lakers, but in what role is still unknown.

Bulls are 9-4 and rank 6th in net rating despite not having a starter (Patrick Williams) and a key reserve (Coby White) play all season and now without Nikola Vucevic for a stretch.

White on track to play tonight vs. Lakers.

Here’s what Bulls head coach Billy Donovan had to say about White’s role and any potential restrictions on the third-year guard in his season debut tonight in Los Angeles:

“I haven’t talked to [the] medical [team] yet. I don’t know if there will be a minutes restriction on Coby. If there is, that kind of helps it a little bit in terms of when Coby gets to a place where he can play a normal allotment of minutes.

“Clearly, going into his first game, there’ll be a lot of anticipation on his part, and we’ll have to see what he looks like. There’s probably going to be a lot of rust on him. Whatever happens to him [Monday], he’s always had the mentality to come back and work and try and figure it out to make it better.”

The Bulls can benefit from Coby White’s scoring ability off the bench. Still, White’s minutes almost surely come at the expense of minutes for rookie Ayo Dosumu, who’s played well for the Bulls this season, providing them with valuable energy and defensive effort with some clutch shots sprinkled in this season. Donovan has said that he will find a way to get White into the mix without completely swapping White and Dosunmu’s minutes.

“I think [Dosunmu has] played too well and has played some good basketball for us,” Donovan said. “We’ve got to find a way to utilize both of those guys.”

Through two seasons in the NBA, we’ve seen Coby White be able to score in bunches. Still, he’s struggled to play the primary point guard role effectively, lacking in the passing and play-making game, hence the acquisition of Lonzo Ball this summer, so it will be interesting to see how White’s return plays out this season. However, it seems as though being a primary scoring option on the second unit for the Bulls is where the young guard fits this roster best. Still, again, we can’t deny the importance of Ayo Dosunmu’s skillset and contributions despite the two playing the same position.

I will say that Billy Donovan has done an excellent job of mixing and matching lineups that aren’t handcuffed to positions, with last night’s starting five being just the latest example of Donovan’s magic with his rotations. Starting Alex Caruso in place of Javonte Green at the four allowed the Bulls to space the floor and apply defensive pressure early against the Clippers, leading to a 30-17 lead at the end of the first quarter.

Speculation and minutes considerations aside, I’m excited to have White back tonight. White logged 15.1 points per game on 41.6 percent shooting as the Bulls’ secondary option behind Zach LaVine before the Nikola Vucevic trade. While streaky when it comes to his shot at times, White can score, and he’s still getting better as a 21-year-old guard who made his NBA debut in 2019 as a 19-year-old.

The most 3’s in a quarter by a rookie: Coby White

The most 3’s in a quarter by a Bull: Coby White

It only took 11 games for Chicago’s young guard to find his way into the record books. I’m so excited to keep watching him grow.
pic.twitter.com/88SC8vSvk6

If you remember correctly, and I know this seems like forever ago at this point, mainly due to the COVID-19 pandemic, White made just one start in his rookie season on March 10, just before the shutdown. Coming off the bench, White averaged 13.2 points per game and shot 35.4 percent from three-point range. White became the first Bulls rookie to post consecutive 30-point games and the first rookie reserve to score 30-plus points in back-to-back games in NBA history during a 10-game stretch that saw White score 24.7 points per game on 40.7 percent shooting from three off the bench.

However it shakes out, it’ll be fun. Welcome back, Coby!