DeRozan's Early-Season MVP Case, a Battle with the Blazers, and Other Bulls Bullets Skip to content 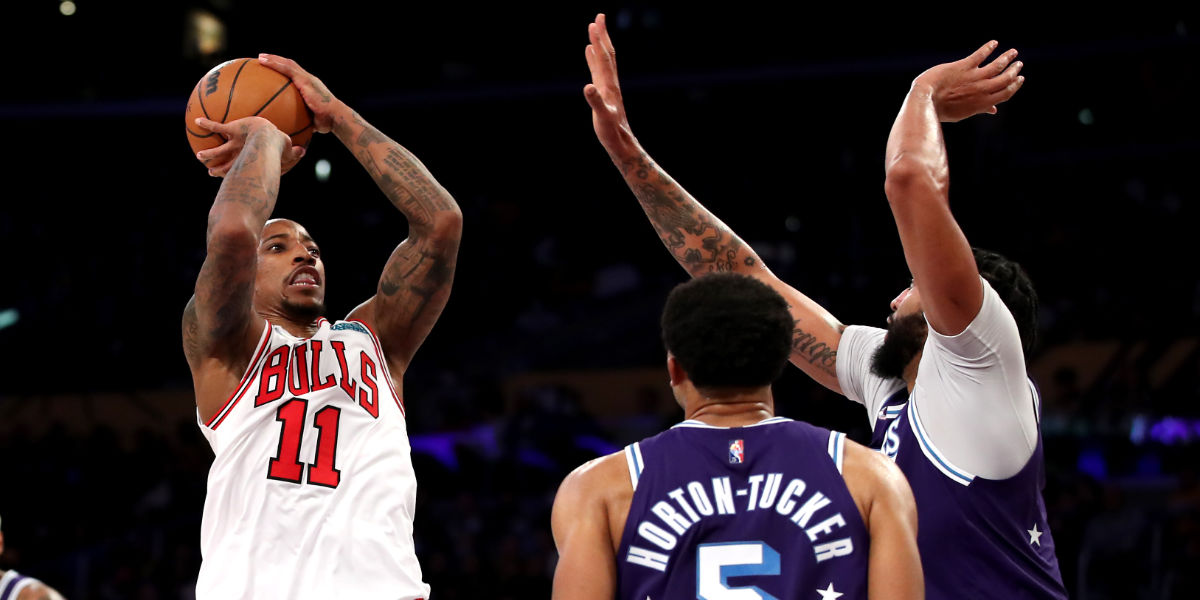 Having an MVP conversation after 14 games is practically the same as handing out an Oscar after seeing the trailer. We need a lot more time to determine who has the most significant impact on their team this season and how well those teams will do.

Trust me, I wish I could say the Chicago Bulls will remain the 2nd-best team in the East all year, but I can’t. Just like I can’t say the Milwaukee Bucks will remain outside the playoff picture, and the Cleveland Cavaliers will evade the play-in tournament. A lot can change over the next 68 games, and we are best served to keep that in mind as the Bulls continue this bounceback season.

Now, before I continue …

SCREW IT. SPIDEY GETS THE OSCAR, AND DEMAR GETS THE MVP. LET’S GOOOOO!!

•   Look, I’m not the only one to mention the three-letter acronym with DeRozan’s name this season. On Tuesday, J.J. Redick hopped on ESPN to claim the four-time All-Star is third on the MVP ladder right now. Hell, even NBA dot com put DeRozan right outside the Top-5 in their MVP ranks.

"If you were to have an MVP power rankings as of today, I'd put DeMar DeRozan third after Steph and KD."

•   And, yes, while I find these talks to be pretty premature, there is no denying that DeRozan’s name has to be included if the topic is brought up. The 32-year-old forward is currently the league’s 4th-leading scorer with 26.9 points per game. In addition, his 7.9 free-throw attempts a night also rank 4th in the NBA, and his 1.9 turnovers per game are the fewest among the league’s top-15 scorers. In other words, DeRozan has not only been one of the game’s most lethal offensive threats, but he has been one of the league’s most responsible players with the ball in his hands. Combine that with a +21.1 efficiency differential (94th percentile), per Cleaning the Glass, and DeRozan’s impact when he’s on the court versus off the court is one of the strongest the NBA has seen this season.

•   Now, how long can he keep this up? It’s a fair question. While I think this version of DeRozan is arguably the most well-rounded we have seen, I also think the talent on this Bulls team is bound to sink his scoring output and overall responsibility. The potential for Zach LaVine to surge even more on the offensive end is there, especially as his thumb improves. Likewise, Nikola Vucevic is bound to hit his stride as the season goes on. And, in my opinion, DeRozan getting to do a little less as the season progresses is actually a good thing. I have loved watching him carry this team thus far but putting fewer miles on a veteran in preparation for the playoffs never hurts. Also, if we’re being honest, DeRozan scoring a little less while the Bulls keep winning would signal an even more balanced team. But, hey, if DeRozan wants to run away with an MVP … I have no complaints!

•   It’s your turn, Portland! The Chicago Bulls will continue their road trip tonight against the Trail Blazers, which currently sits one game under .500 and 9th in the Western Conference. Damian Lillard has really struggled to find his groove to start the year, averaging just 20.3 points per game on a dismal 38.7 percent shooting from the field and 27.9 percent shooting from downtown. Fortunately, however, CJ McCollum and Norman Powell have held a steady hand, which has helped Portland still claim the NBA’s 7th-best offensive rating.

•   I should also mention that, at home, the Trail Blazers tend to be a completely different team. Lillard and Co. are 6-1 at the Moda Center, and their horrible 28th-ranked defense actually ranks 9th when playing in their city. So I hope the Bulls are prepared for another tough battle!

At home Blazers rank 2nd in offense and 9th in defense and rank 3rd in net rating behind Golden State and Miami. Portland is 6-1 at home. https://t.co/mY379un3TB

Steve Nash, on if he’s worried about losing to the top teams they’ve played so far — the Warriors, Heat, Bulls and Bucks: “We’re not in that tier yet.”

•   Nash is likely saying this as a form of internal motivation more than anything, but I could not help but crack a smile when I saw this comment. Words like these, no matter how truthful they may be, help demonstrate just how quickly the perception of this Bulls team has changed. Obviously, we can attribute that to the team’s record, but there would not be that record without an aggressive offseason. Free agency decision-making is when the opinion of this organization started to shift. The sheer aggressiveness of the front office, whether people agreed with the contracts handed or not, was impossible not to respect. Chicago demonstrated to the rest of the NBA that they wanted to win, and the fact it’s already paying off this quickly makes it all the more impressive.

•   In all the craziness of the Bulls’ success, this heartfelt story by Marc J. Spears got lost in the shuffle. Makes sure to check it out.

DeMar DeRozan spoke with our @MarcJSpears about his new tattoo of his late father, Frank DeRozan.

•   My friends recorded a podcast, and I think you should listen to it!

Ep 52 is up! @SouvenirCity @lcm1986 and @Mphelps11 talk about the #bulls recent success, why AB was wrong on DeMar, and just how good has this defense been? https://t.co/fQbiVHkrHy #BullsNation

•   For all of Scottie Pippen’s talk about Michael Jordan not being a great teammate, it sure seems like Jordan never forgot to give Pippen his flowers for his role in the Bulls’ success.

Michael Jordan showing love to Scottie Pippen after the 1997 Finals

“You deserve it too…you’re my MVP”