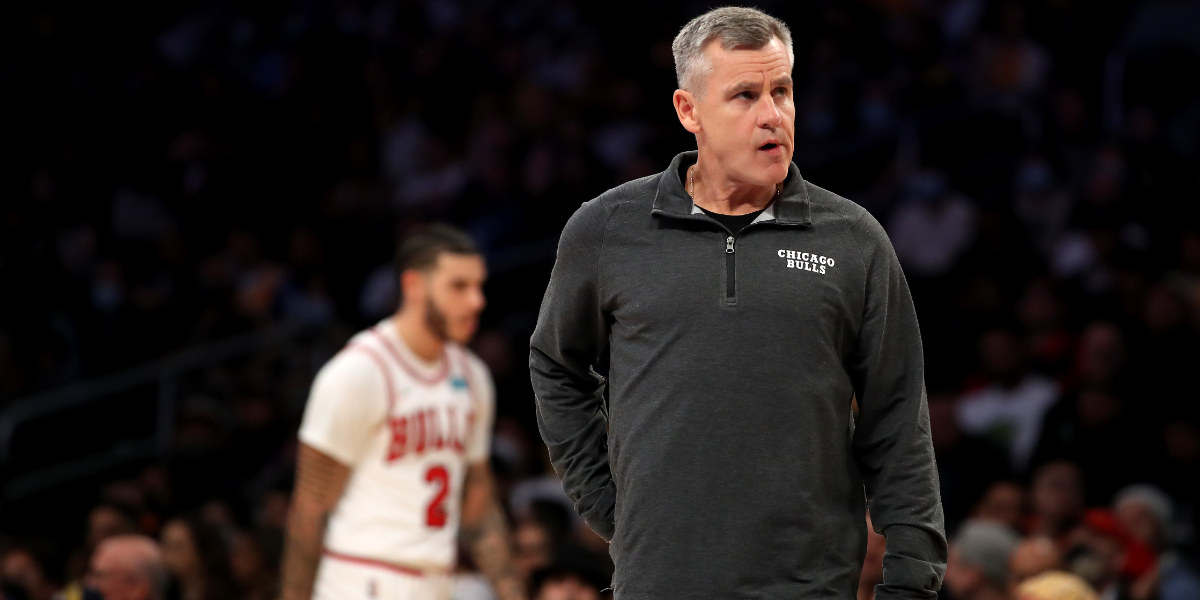 If you went to bed at halftime of last night’s Bulls game – when the team was up 63-48 and wiping the Moda Center floor with Blazer jerseys – you made the right decision.

Don’t get me wrong, you missed a lot, but it was mostly two-quarters of stomach-inducing basketball that resulted in a blown 20-point lead and a 112-107 loss. In other words, if you remember what the Bulls did to the Celtics and Jazz, just imagine roughly the opposite. Chicago got a big lead and fell complacent while Portland took full advantage.

•   The Blazers comeback was just as much about their own solid two-way execution as it was the Bulls quite literally dropping the ball. In a very uncharacteristic fashion, a Bulls team that came into the night averaging the 5th-fewest turnovers per game coughed up the ball 11 times in the second half, 10 of which came in an ultra-sloppy 3rd quarter. As the team averaging the second-most points off turnovers a game, almost no one knows better what a high-powered offense can do with these mistakes. Portland – who now has the league’s 6th-ranked offense – ended up outscoring the Bulls 29-17 on points off turnovers. While late-game decision-making also hurt this Bulls squad, there is no question this department is where the game was lost.

Today we just didn’t handle it pretty well. We got to be able to understand it’s 48 minutes. And I think the things that allow comebacks like that, in my opinion, is getting to the free throw line, giving up 3s, and turning the ball over. And that really hurt us.

•   Portland chucks up the 5th-most 3’s a game, and while they have yet to be all that efficient, the eight long-range buckets they knocked down in the second half also made a big difference. Two of those threes came from big man Larry Nance, and his physical inside-outside presence was a problem for the Bulls all night. Nance finished with 16 points, 9 rebounds, 3 assists, and 3 steals off the bench. A rather mobile big man who can stretch the floor, he represented the perfect kind of reserve that can give this otherwise successful small-ball Bulls lineup a lot of trouble.

•   In some ways, this game left a faint aroma of years past. LaVine was practically flawless in scoring the basketball (11-20), leading the team with 30 points, but cold stretches from reserves bit the team in the butt. DeRozan went 0-7 in the second half while the Bulls bench was outscored 20-7 in the final two frames. Considering how flawless DeRozan has been in his own right this season, he is allowed to have a cold half, but this only exemplified the need for someone like Coby White. The third-year guard has yet to record a point since making his debut against the Lakers. Likewise, he has yet to look even an ounce comfortable alongside his new teammates. But … can we blame him?

•   As much as the Bulls need White, I think it’s a bit unfair to come knocking at his door this soon. The guy has seen a total of 21 minutes of action after a nearly six-month hiatus. Not to mention, for a player who does plenty of work off the dribble and scoring the basketball, a torn labrum isn’t the easiest injury to come back from. We all knew it would take time for White to regain confidence in his abilities and his role within this rotation. I still feel confident that will happen, but the question is how soon?

•   Of course, a healthy Nikola Vucevic would take even more pressure off White’s resurgence. The Bulls missed the big man last night as they tried to keep Jusuf Nurkic and Nance in check. Plus, as one of the better centers at taking care and distributing the basketball, Vucevic could have definitely been a saving grace in the second half. Get well soon, buddy. We need ya.

•   I know this would have only sent the game to overtime, and I also know the game was lost well before this bucket clanked off the front of the rim, but how many times does LaVine miss this? Maybe, like, once every six times? The dude even said it himself after the game, that was “probably the most open shot I had.”

•   The miss from downtown is particularly surprising when we consider how good LaVine has been shooting the 3 over the last six games. After opening the year with just a 33.9 percent clip from downtown in his first 9 contests, LaVine has shot an absurd 47.9 percent from distance since the Brooklyn game. His season average is now above 40 percent on 7.3 attempts per game.

•   One positive way to look at last night’s loss: We helped the Bulls first-round pick odds! Remember, Portland traded a first-round pick and Derrick Jones Jr. in the 3-way deal that sent Lauri Markkanen to Cleveland and landed them Nance. The pick is lottery-protected, however, so the closer they move into the playoff picture the better.

•   I immediately thought Billy Donovan should have called a timeout on that ugly late-game possession where DeMar DeRozan slipped. Well, according to the video provided by Stephen Noh, it turns out he tried to. Ugh, refs.

You could see Billy literally screaming and marching right in the ref's face asking for a timeout. Not much more he could have done. pic.twitter.com/PhTQfWiwbA

•   How about you just do your job well?

ESPN Sources with @RamonaShelburne: NBA general managers are working to finalize formation of a professional association that would collectively support executives with access to legal defense funds, lawyer referrals and PR professionals: https://t.co/yhaTzlo72G

The first Bears injury report after the bye is loaded with impact players who did not practice on Wednesday, so that's cool. https://t.co/467DRfZW4O