Sitting At the Top of the East, Power Rankings Update, DeRozan's Passing, and Other Bulls Bullets Skip to content 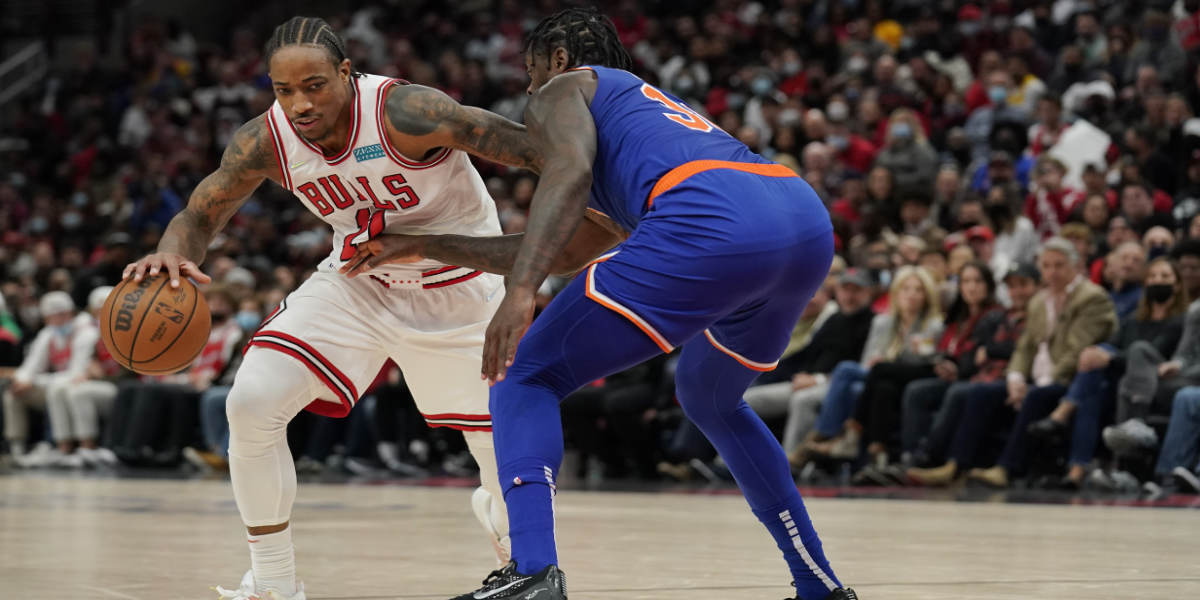 Yes, we’re only 17 games into an 82 game season. And, mhm, only three games separate the final play-in tournament spot and the top seed in the Eastern Conference. But the top is still the top and the bottom is still the bottom. As far as Chicago Bulls basketball goes, regardless of how many games have been played over the past few seasons, they have consistently been closer to the bottom than the top. Until now.

Last night’s victory over the New York Knicks marked the earliest the Bulls have achieved 12 wins since the 2011-12 season. Last season’s team didn’t reach the mark until February 17, which was a whole 27 games into the regular season. The year before that, the Bulls took 31 games to earn a record of 12-19. I could go on, but I’d rather not ruin your Monday with tear-inducing flashbacks.

The point is the Chicago Bulls of the past are exactly that … in the past. Season after season melted into one another over the past handful of years, with competitive basketball feeling as absent as Alex Caruso’s hair (no offense, of course). Now, the Bulls are not only playing their most competitive brand of basketball since the early 2010s, but they are doing it so well that we get to tweet something like this:

•   What’s even more impressive than the Bulls claiming the current top spot in the Eastern Conference is how they got there. A little under one month ago, Chicago started arguably its hardest stretch of the regular season. Seriously, look at the schedule and it’s as if the team went from facing coach-pitch to Jacob DeGrom 99mph heaters in just one at-bat. Twelve of the team’s last 13 games were against playoff opponents from one season ago. The one game that technically wasn’t against a 2020-21 playoff team was the matchup with the Golden State Warriors, who currently sit atop the league standings with a record of 15-2.

•   Over these 13 games, the Bulls went 8-5. Twelve of those games had to be played without starting power forward Patrick Williams and six of those games had to be played without All-Star center Nikola Vucevic. Five of the games Vucevic missed were also on the road out West, where the Bulls picked up wins against the Clippers, Lakers, and Nuggets. In other words, if you’re still denying that this squad is a legitimate Eastern Conference playoff team, you’re either (1) a troll who lives under a dirty bridge or (2) someone who has a disease where they can only speak in opposites.

•   Power Rankings around the league continue to have no choice other than to bolster the Bulls. Here is where Chicago sits in some of the latest mainstream lists …

•   Moving even further up the ranks this week could be difficult, if not because the team is already so high than because the competition is not all too fierce. After this 13-game gauntlet, the Bulls will now have things ease up considerably with matchups against the Pacers, Rockets, and Magic.

•   Okay, but let’s circle back to last night. While the Bulls have done their fair share of winning so far this season, last night was a different kind of encouraging victory. The New York Knicks are one of the more physically imposing teams in the league. As much as their offense has struggled as of late, they have still given a number of top teams a hard time thanks to their defensive effort and tough presence in the paint. I was a bit worried about how the Bulls would fair without big man Nikola Vucevic in the mix. We may not think physical when we think Vooch, but he still carries a bulky seven-foot frame that helps combat the size of a guy like Julius Randle. Through a communal rebounding effort and smart defensive game plan by Donovan, though, the Bulls were able to make the size disadvantage less of a concern. No, nothing about the game was pretty, but it spoke volumes about this Bulls team to squeak out a messy game where they had to rely on timely shot-making and aggressive defense (as opposed to the more athletic and scrappy style we see centered around deflections/steals).

•   These would not be a set of bullets without praising DeMar DeRozan. Just when I think those who called him the worst free-agent signing of the offseason couldn’t look more wrong, DeRozan goes ahead and drops 30+ points again with stellar play in the clutch. The methodical bucket-getting is what will always stand out most with DeRozan, but his passing deserves an increasingly loud round of applause. Working as the point forward in last night’s 4th quarter, he dished out 3 of his 6 assists.

•   The first came when DeRozan dribbled his way to the free-throw line and shot-faked twice. The moment Nerlens Noel stepped up to help Obi Toppin stop the midrange assassin, DeRozan wrapped his arm around the left side of Obi Toppin to find a cutting Derrick Jones Jr. for the dunk (props to DJJ for the cut). Next, after seeing Toppin fade toward the basket from the weak side in fear that DeRozan might hit another cutter in Javonte Green, DeRozan went cross-court to Lonzo Ball for the 3. Lastly, DeRozan fought to get to his spot by the elbow which forced R.J. Barrett to drop and help Randle. DeRozan then kicked it to LaVine, who had the angle to drive in for the finish. Each pass was perfectly placed and perfectly timed, and when we combine this kind of IQ with his natural scoring ability, it’s not surprising to see this Bulls team listed as a top-5 fourth quarter team in the league, per Net Rating.

A couple boys from Chicago. pic.twitter.com/udgE0LUrwa

•   The Blackhawks are finally getting the contributions they hoped for from some of their key players.

•   Does Arturas Karnisovas want to run the Bears too?

That Should Be the Beginning of the End of This Era of Chicago Bears Football https://t.co/9BITtCVR7s