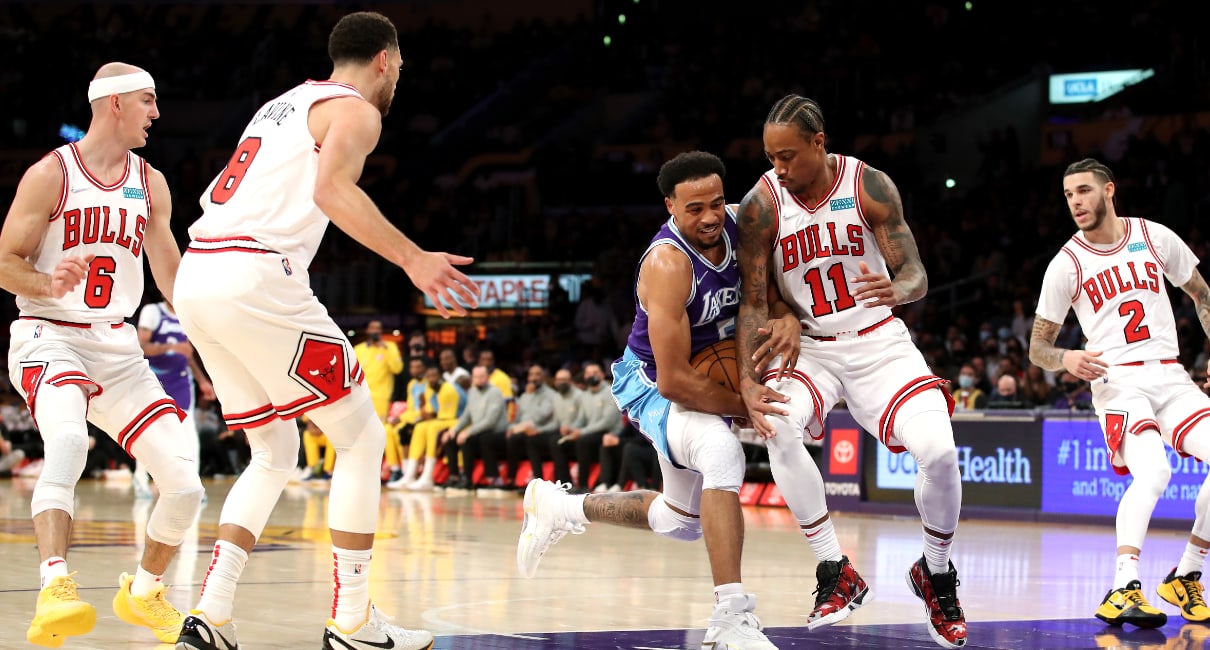 It’s been a tremendously fun start to the season for Chicago Bulls fans, who have plenty of reasons to give thanks this Thanksgiving. From the record to the players to the energy to the swag, it’s all been a blast! And, the good news is, it’s just getting started!

With that in mind, here are a few specific things I feel thankful for this Holiday season.

We did it. We survived the GarPax era, which was easily one of the most miserable eras, and that is saying a lot as a Chicago sports fan who is seemingly stuck in a perpetual state of pain. But, now we get to reap the rewards that our patience has brought us, and that reward is the ultra-aggressive (but calculated) front office of Artūras Karnišovas and Marc Eversley.

In about 18 months since AKME took over for the Bulls, they’ve revamped the entire roster with Zach LaVine and Coby White serving as the lone holdovers from the GarPax/Jim Boylen era. LaVine, of course, is a player that is emerging as a superstar in this league, and Coby White showed us that he has the talent to serve as a valuable scoring option of the bench, so both are rightfully still in the mix.

AKME drafted Patrick Williams in the first round of the 2020 NBA Draft, and despite the second-year forward being sidelined with a wrist injury this season, he looks like a fit long-term fit. Then, despite not having a first-round selection this season, AKME got first-round value out of their second-round pick, Ayo Dosunmu, in the 2021 NBA Draft.

Couple that early draft success with the acquisitions of Nikola Vucevic (trade), DeMar DeRozan (sign-and-trade), Lonzo Ball (sign-and-trade), and Alex Caruso (free-agent signing), and you got a front office duo that transformed a cellar-dwelling roster into an Eastern Conference playoff threat faster than we’ve been able to emerge from the pandemic.

Pretty damn impressive, and my gut tells me they’re not done seeing their vision through with this roster yet.

Zach LaVine came to the Bulls as a 22-year-old role player fresh off a torn ACL. LaVine averaged just 13.7 points per game in Minnesota and was most known for his NBA Slam Dunk Contest success (and I’m still thankful for those highlights). In Chicago, LaVine was expected to be the top-scoring option and a building block for success. They were lofty expectations for the athletic guard, but the man has not disappointed.

LaVine has gotten better and better every season and has turned into a legitimate No. 1 on a contending team, a title that many opined that he would never be able to live up to in Chicago. After averaging 27/5/5 for the Bulls last season, and then showing fierce dedication to improving on the defensive end (which was on full display during his Team USA run that ended in a Gold Medal), LaVine has shown all of us he can be that dude for the Bulls.

Zach LaVine is too cold for this 🥶 pic.twitter.com/rldR2kw1zq

Even with DeDerozan in the fold and scoring at a pace among the top in the league, LaVine is still averaging 26/5/4 for the Bulls this season and playing the best defense he’s played to this point in his career (109 DRTG/per 100 via Basketball-Reference).

DeMar DeRozan and Lonzo Ball have been precisely what the Bulls needed to take the next step in their resurgence towards being legitimate contenders in the Eastern Conference. DeRozan is having one of his best seasons, averaging 26.3 points per game (6th in the NBA) in 35.1 minutes per contest. DeRozan’s 474 total points trail only Kevin Durant for the most scored in the NBA this season. We all knew that DeMar DeRozan was good, but we didn’t know he would be this good for the Bulls.

Ball has been arguably better than advertised since coming to Chicago, doing just about everything you could ask for. He facilitates (4.5 assists per game), scores (12.0 points per game), rebounds (5.2 rebounds per game), and creates turnovers (1.7 steals per game) on a consistent basis. Ball has routinely been assigned the most challenging defensive assignment on the floor, and he’s embraced that challenge time and again.

Meanwhile, Alex Caruso’s impact in Chicago has been unmeasurable in the box score. Caruso has brought the Bulls energy, playmaking, and gritty point of attack defense, and they wouldn’t be where they are right now without him. In other words, you won’t catch me devaluing Caruso’s impact like the Lakers did this summer!

LaVine and DeRozan.
Ball and Caruso. @KevinOConnorNBA explains how the two duos perfectly complement each other on offense. #TheVoidNBA pic.twitter.com/X85PF6mrPN

For as impressive as the trio’s performance has been this season, the fact they chose to come to Chicago was a crucial step in the right direction for AKME and the Bulls front office. The Bulls have swung and missed on primary free agents for years upon years, but that streak ended this summer. And you better believe the decision to sign with Chicago by guys like DeRozan, Ball, and Caruso, as well as the team’s performance this season, will go a long way in making Chicago a premier destination for future free agents.

Found Money on the Bench

You know how you sometimes find some loose cash in the dryer after doing laundry, and it feels like you just got some “free” money out of simply doing a chore? Well, that’s what it’s felt like watching guys like Derrick Jones Jr. and Javonte Green thrive in their roles with the Bulls this season. Green was signed using the free-agent minimum and is under contract through the end of next season for just $1.8 million. Meanwhile, Derrick Jones Jr. was acquired alongside a first-round pick in the Lauri Markannen three-way deal in late August.

Both have played critical roles for the Bulls this season, with Green and DJJ averaging 18 minutes per contest for Billy Donovan’s Bulls. They’ve been as effective as they have been fun to watch. Both of them play fast and athletic and can jump out of the gym.

Speaking of which, can I interest you in probably my favorite dunk of the season?

That’s basically what I’m going to look like on Thursday going in for seconds (who am I kidding, probably thirds).

Of course, we can’t forget about Alex Caruso’s work off the bench (where he’ll likely be again after Vooch returns), which I talked about already (and even more here, if you’re looking for some reading material today). Then, there’s the spark and scoring punch that guys like Ayo Dosunmu and Coby White have brought and will continue to bring to the table for the Bulls this season. It’s all just lovely!

All right, that’s enough for today, I have to go try on some stretchy pants in preparation for later this week!

Happy Thanksgiving and a big thank you to the Chicago Bulls!!