A Trip to Houston, Hoping for Vucevic's Return, the Great Defense, and Other Bulls Bullets Skip to content 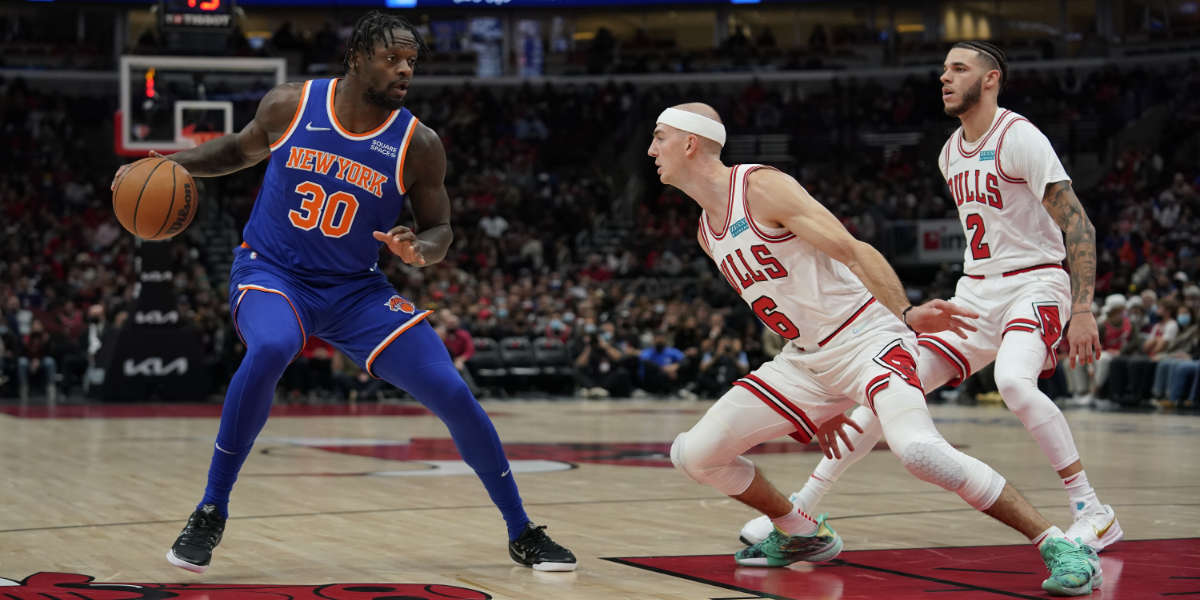 I hope everyone is trying on their best stretchy pants and doing some intense jaw workouts. I know I am!

•   As far as bounceback opportunities go, the Chicago Bulls couldn’t ask for a better one tonight. Houston has lost 15-straight games and comfortably holds the league’s worst net rating. They allow their opponents to score just over 111 points per game while scoring just barely 100 themselves. One area the Bulls will hope to especially exploit is the Rockets’ turnover trouble. This young roster averages 18.8 turnovers per game, which is league-worst and over two more than the second-worst team (Los Angeles). Chicago’s defense has so far forced opponents into 6th-most turnovers a game (16.0), averaging 19.4 points off those turnovers, which is the 3rd-best mark in the league.

•   Thanks to the Rockets’ inability to take care of the basketball, teams who have a knack for getting out in transition have thrived. Opponents score a league-high 17.9 fastbreak points on Houston’s transition defense, a stat I’m sure Lonzo Ball and Zach LaVine have already salivated over. Simply put, there is no reason the Bulls shouldn’t be able to control this game from start to finish. While I’m sure there are still some tired legs from the grueling past few weeks, they have had an opportunity to rest up and regain some health. Nikola Vucevic was upgraded to questionable for the first time since entering the NBA’s Health & Safety Protocols on November 11th. Of course, that means his availability is up for debate, but I lean toward believing he will get at least some clock tonight. A matchup with Houston feels like a good opportunity to get his feet wet while still holding him back from a full workload.

•   Arguably the more pressing question is whether or not Alex Caruso will rejoin the mix. The Bulls have at least grown used to playing without Vucevic the past week, but the absence of Caruso was harshly felt on Monday night. They forced the Pacers into only 11 turnovers, the Bulls’ defense’s second-lowest total of the season. Chicago’s 13 assists also marked a season-low as the offense repeatedly fell stagnant without the off-ball movement and complimentary playmaking of Caruso. I wouldn’t go as far as to say the Bulls need him in a matchup with this Rockets team, but there is no question his return would make it that much more likely the Bulls take control early.

•   Speaking of defense, FiveThirtyEight’s Louis Zatzman wrote a great article about the Bulls’ surprising improvement on this end of the ball. The team currently sits 10th in defensive rating, a number that seems sustainable now 18 games into the season, especially when we consider the Bulls just came off one of their tougher stretches of the year. Anyone who turns on even one Bulls game knows Alex Caruso and Lonzo Ball have been at the forefront of this defensive success. Zatzman shared a telling stat about how active these two have been as the team’s first line of defense, check it out:

But no matter which position they guard, they seem always to be involved at the point of attack; per Second Spectrum, Ball has defended the most pick and rolls in the league and Caruso the 12th most. And they have a shared habit of either blowing up plays, as evidenced by their block and steal rates, or eliminating any advantage from them and grinding the dynamism out of offensive sets.

•   When you have two sizable backcourt guards who can put this much pressure at the point of attack, it makes everyone else’s job that much easier. Don’t get me wrong, Donovan has still needed a strong effort from guys like Zach LaVine, DeMar DeRozan, and Nikola Vucevic, but that’s exactly all he’s had to ask for … effort. Ball and Caruso can do a bulk of the dirty work while everyone else just has to make sure they are in the right place and at the right time and ready to contest.

•   We also have to give some love to Derrick Jones Jr. for his defensive contributions. Tasked with playing center for the first time in his career this season, the lengthy Jones has held his own as a rim-protector on one end and a roll man on the other.

Thriving in a role created by injuries, Derrick Jones Jr. has been one of the unsung heroes in the Bulls’ early-season success. https://t.co/YQL3uvLuJl

•   Interesting find by Mark. I have not been worried about the absence of Daniel Gafford recently, as I think Tony Bradley has been a cost-effective backup big, but this shows even more why the trade isn’t worth complaining about for now. The Bulls have largely been able to replace Gafford’s contributions. And while I know more appropriately sized frontcourt help could be needed down the road, I think the Bulls can find an easy answer in the trade market.

A comparison between two rim-rolling centers and their numbers this season. pic.twitter.com/j2zwxaDK42

•   The Pelicans had a chance to keep Ball … and they chose this. Excuse me while I giggle.

DeMar DeRozan’s game looked passé at 2-guard, but now he’s reaching new heights as a 4 for the Bulls. @seeratsohi: https://t.co/39MoogsM9f

•   If the Bears want to borrow Arturas Kanrisovas to clean things up, be my guest.

A “Remarkably Clumsy,” “Complete Mess” of a Day at Halas Hall (And Other Bears Bullets)https://t.co/yh3PQ0Zdgc