It wasn’t a pretty game, but thankfully there weren’t many people there to watch it in a mostly empty Toyota Center in Houston. I guess we can’t expect many people to want to spend Thanksgiving Eve watching a 1-16 Rockets squad. It was a get-right game for the Bulls, but it looked a lot more like a trap game for much of the night, and it ended up being just that as Houston snapped their third-longest losing streak in franchise history.

Every time it looked like the Bulls wanted to turn it on, they fell into prolonged stretches of unspirited play. Losing to the 1-16 Rockets is just unacceptable any way you look at it.

Billy Donovan made a point of getting Vooch involved early in his return to the lineup with some pick and roll action on the game’s first two possessions. Vooch was the roll man on the opening possession, and he found Javonte Green in the corner for a wide-open three-pointer. On the next possession, Vooch was the roll man again, and he got an open look at the basket but couldn’t get it to fall. Vooch was visibly rusty, especially defensively, but the big man will be fine.

Lonzo Ball took the early bus to the stadium tonight to get some extra shots in, and it showed early as Lonzo Ball scored eight points and nailed both of his three-pointers before Billy Donovan’s first timeout with 5:31 to play in the first quarter.

For a little first quarter poetry in motion, we had Stacey King and Adam Amin talking up Rockets’ rookie Alperen Segun after he checked in the game, followed by Bulls rookie Ayo Dosunmu putting Segun on a poster to give Chicago a lead late in the opening frame in Houston.

.@Stacey21King and @adamamin talking this kid up and then him immediately getting put on a poster by Ayo Dosunmu made this even better! pic.twitter.com/72kYfdEFGe

While we’re working the highlight machine tonight, here’s a steal and a slam by Javonte Green mid-way through the third quarter!

Lonzo Ball scored 19 points on 7-of-11 shooting (5-of-7 from three), and Zach LaVine led all scorers with 28 points. Nikola Vucevic scored 14 points and logged 13 rebounds and four assists in his return but spent the night in foul trouble and was on the bench down the stretch as the Rockets closed the Bulls out.

The Rockets got significant contributions from the bench, but again, the story tonight was a very uninspired performance by the Bulls in Houston. If the Bulls want to be considered contenders, they can’t lose games like these. It’s flat-out unacceptable.

Oh, well. Throw it away, enjoy the holiday, and it’s on to Orlando on Friday night. 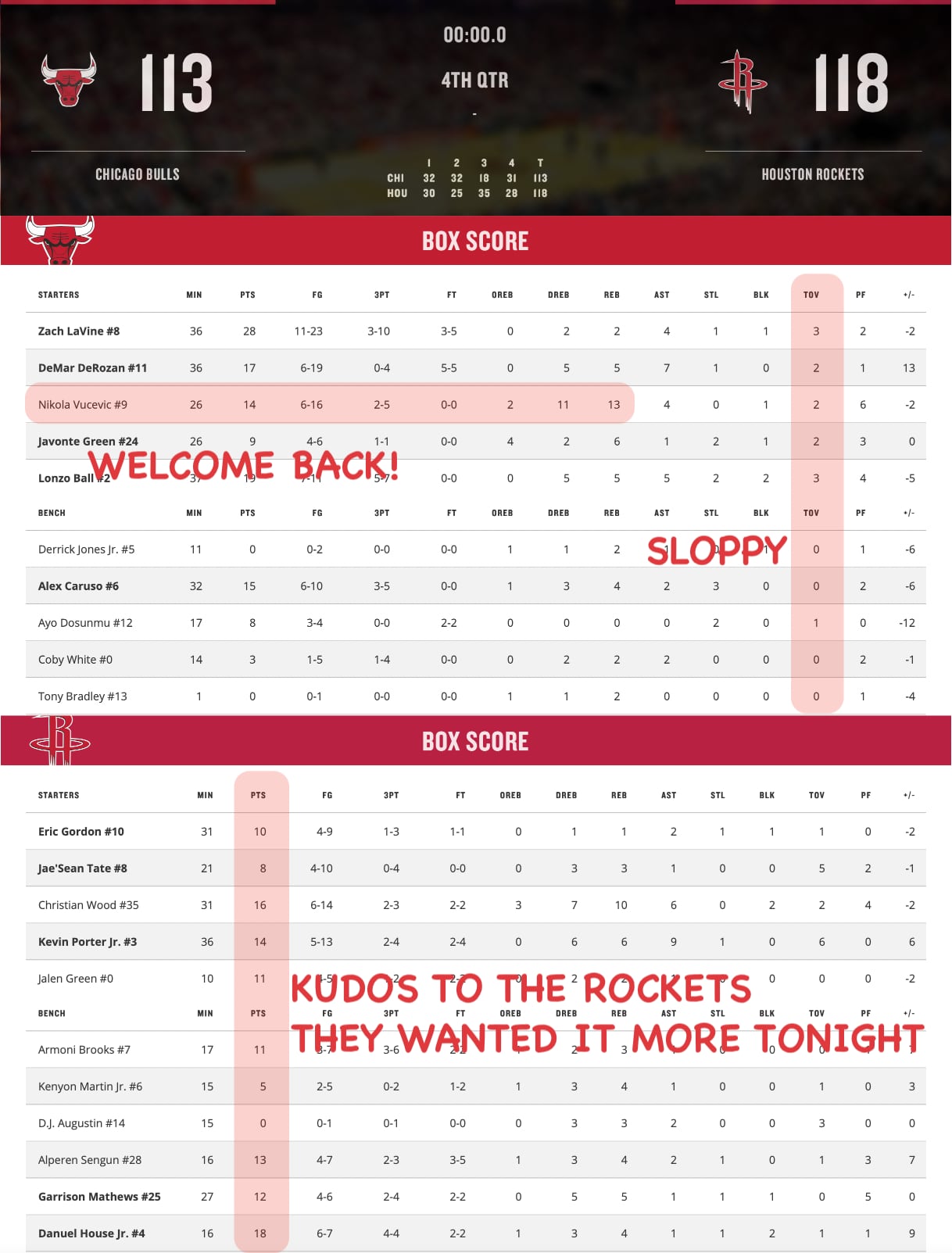