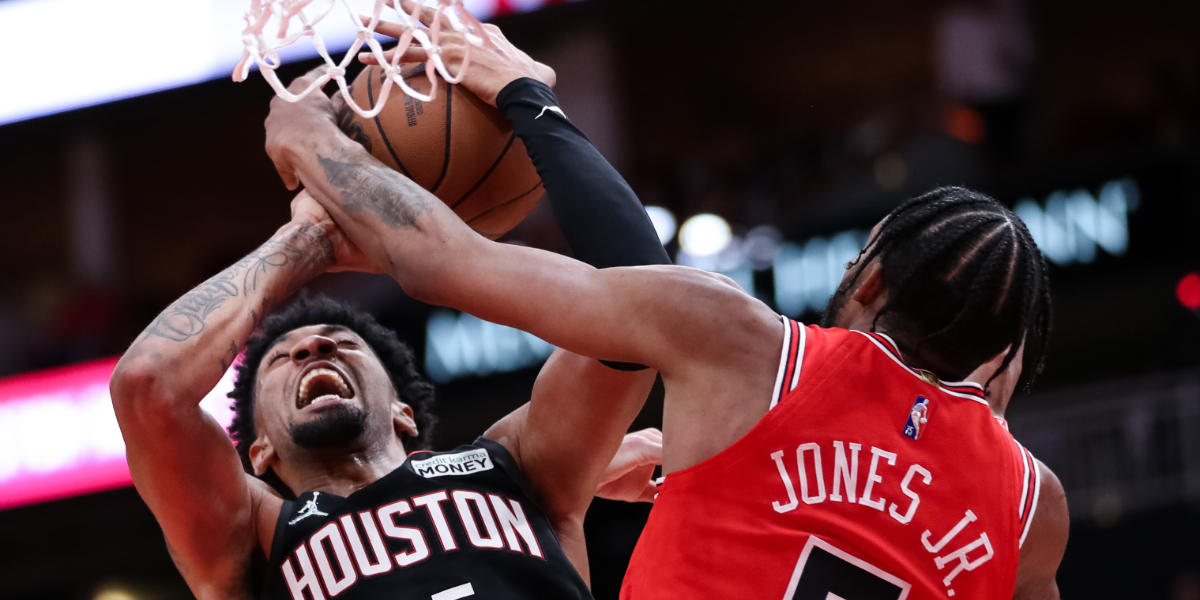 Fortunately, I did not have to watch Wednesday night’s debacle. I tapped in Patrick to cover my butt while I headed to visit my significant other’s family for the holiday. In a game against the 1-16 Houston Rockets, I assumed Patrick would have a somewhat fun and effortless night. Watch the team grab an early lead, retweet a few highlights, have the postgame done at halftime, and maybe even get some Devon Dotson minutes. Alas … here we are.

The Rockets are now 2-16 and the Chicago Bulls have easily their most embarrassing loss of the new era. I can’t even begin to describe how dumbfounded I was when I looked down at ESPN’s Gamecast to see these two teams neck-and-neck in the 4th quarter. But I guess that’s exactly part of the problem, right?

In the NBA, any team can beat any team on any given night, and right when you begin to think otherwise, you get slapped in the face with a raw wet Turkey. Happy Thanksgiving! *whack*

•   While it may only be one loss, it’s the kind that loses you some respect around the league. To be clear, no, I’m not talking about individual talent but rather this team as a whole. What Wednesday told us is the Bulls got too comfortable. Collectively, they thought they could walk into Houston and cruise to a win. I don’t care how good a team might be, that kind of mentality is just as much dangerous as it is concerning. Do you think a team like Orlando feels any more fearful about their matchup with Chicago tonight? Not at all. If anything, Houston just showed them these unbreakable Bulls were a bit more fragile than some thought.

Billy Donovan: “We’re gonna really have to be better on both ends of the floor.”

Said Bulls “messed around with the game” in third quarter, and that, while they’re a good team, they’re not good enough to have stretches like they did in that second half

•   What makes me even more frustrated is that Wednesday night represented everything the Bulls were not at the start of the season. This was a club whose resiliency and consistent effort kept them in games and pulled off miraculous comebacks. Sure, the execution may have not been there at all teams, which is expected with such a new roster, but the chip-on-the-shoulder mindset was always present. Chicago wanted to use every single opportunity that came their way to prove doubters wrong, but it’s clear that same drive wasn’t there against the NBA’s last-ranked offense, who scored 118 points (second-most of the season) and shot 47.2 percent (season-high).

•   Speaking of doubters, the Bulls cracked the door for them the past two games, especially those who questioned the defensive stability. The 54-combined assists by Bulls opponents over the last two games is comfortably a season-high. Likewise, both the Pacers and Rockets shot 40 percent from 3-point range, which marks only the second time the Bulls have allowed that to happen this season (FWIW: The Rockets rank 28th in 3-point percentage while the Pacers rank just 17th). In general, both opponents were able to get into an offensive rhythm that we have not grown accustomed to seeing this Bulls team allow. And while I’m not necessarily worried this is a sign of what’s to come (the team still ranks 9th in defensive efficiency), it certainly isn’t something you want to see against these two teams.

•   Ok, now that I have some of that off my chest, let me be clear: I’m not pressing the panic button. There is no denying that Wednesday’s loss was the worst of the season, but I also have a tendency to believe this will prove to be an eye-opener. Unlike Bulls teams in the recent past, I think there is too much veteran savvy and pridefulness to let this kind of outcome continue. We also can’t throw out everything we have seen from this Bulls team early on. It’s clear the talent and chemistry are there, but it’s time to reel back in the competitive drive that is needed even against a softer section of the schedule.

“Concerned is an iffy word. If we don’t pay attention to it and do things to get better, then it’s a concern. But the NBA season is really long,” Alex Caruso told NBC Sports Chicago. “We got off to a good start and now we’re kind of hitting that second wave of games on the schedule and we have to do a better job of getting locked in.”

•   The Bulls have a great opportunity to show they have learned their lesson tonight against another conference bottom-feeder. Orlando has been better than Houston, but they still sit just 4-15 with the NBA’s second-worst net rating. In other words, after two concerning showings, there should be no lack of motivation to keep a team that shoots just 41.4 percent from the field (28th) and coughs up 15.6 turnovers per game (24th) in check.

•   There should also be no lack of motivation for big man Nikola Vucevic. The big man did face the Magic 11 games after coming to Chicago last season, and he did have a strong outing with 29 points and 11 rebounds, but that performance came on his new home court. Tonight’s affair will be his first time back in the city where he spent nearly a decade and developed into the All-Star center we know today. With a tribute video and standing ovation possibly coming his way, emotions will be high, but let’s hope he can channel those emotions into one of his better outings of the year.

Nikola Vucevic said he was only supposed to play 20 minutes tonight, but felt good enough in first game back to stretch to 26 with Bulls in a bind. He fouled out with 2:46 to play

•   We should keep our eye on Tony Bradley tonight. Derrick Jones Jr. and Javonte Green definitely earned the frontcourt weight they carried upon Vucevic’s return, but sometimes even hustle can’t make up for size. Bradley played just 2 minutes against the Rockets, and the Bulls saw both the lengthy Christian Wood and Alpren Sengun have strong nights.

The Bears Didn’t Ruin Thanksgiving By Losing to a Team That Took a 12 Men on the Field Penalty on a PAThttps://t.co/OpHV0xfm4V