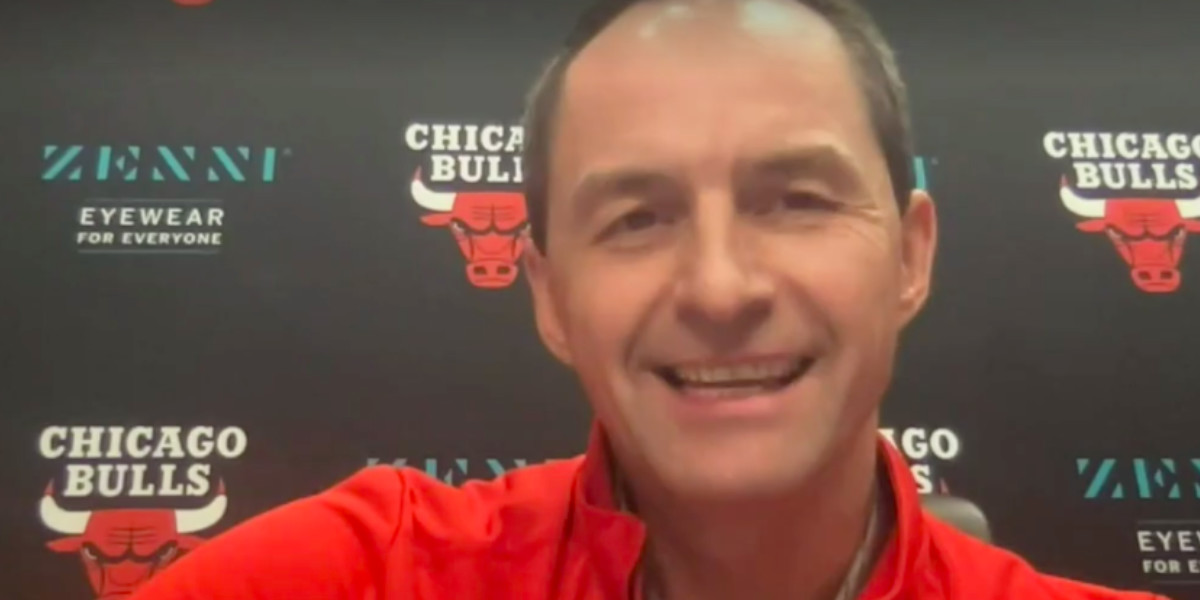 As Nikola Vucevic snagged the high Lonzo Ball pass over Jalen McDaniels for an easy layup in the 4th quarter, Arturas Karnisovas likely pulled out a cigar.

As Coby White burst out in the fastbreak for an easy layup off another Lonzo Ball feed, Karnisovas likely lit that cigar.

Then, as the Bulls sent the basketball around the horn for a wide-open White three before Zach LaVine buried an ISO midrange jumper with 5:41 to go, Karnisovas might as well have poured himself a scotch.

In a game against Michael Jordan’s team, Karnisovas was the one celebrating like the GOAT.

The 9-0 run in a 1:35 stretch quickly put the Bulls back up double-digits, and it came after a 21-6 run by the Charlotte Hornets that shrunk the Bulls’ 19-point lead down to just 4. It was a game that could have gone two ways, and the Bulls’ seemingly endless supply of offensive talent made sure it went their way.

From the playmaking of Ball to the mismatch of Vucevic to the control of DeRozan to the timely shotmaking of LaVine and even White, the Bulls demonstrated exactly what we have all expected to see: Offensive dominance. A season-high 35 assists propelled the team to a season-high 133 points.

Now, is part of that thanks to the Hornets’ 3rd-ranked PACE (more possessions for everyone) and 24th-ranked defense? Absolutely, but the shots still need to fall, and the Bulls still needed to outplay the 5th-ranked offense in the NBA. They didn’t just do that, they did it in a powerful fashion.

The Bulls’ “Big 3” (aka LaVine, DeRozan, and Vucevic) finished the night with a combined 83 points. They all shot well above 50 percent from the field, lifting the Bulls to a 59.6 percent clip on the night, which also happens to be the best mark any team has shot against the Hornets this season.

It goes without saying, but this was by far the most comfortable we have seen all three starters play off one another. We saw more of the LaVine and Vucevic two-man game that started to blossom at the end of last season. And when the big man wasn’t grabbing feeds off the screen, he waited in his spots to take a confident shot. Even better, these opportunities were sprinkled throughout the game, as his 19 shot attempts were his most since playing the Utah Jazz on October 30th.

Meanwhile, Zach LaVine and DeMar DeRozan showed they can still play their high-scoring game while Vucevic earns some of the halfcourt work he needs. DeRozan all-too casually lured defenders into his 15 footers while LaVine levitated to the rim. However, when the shots failed to surface, they had Vucevic spacing the floor ready for the kick-out bucket. This was one of the many skillsets that made Vuecvic such an intriguing addition to this lineup in the first place, and we finally saw him break through his shooting slump with a perfect 6-6 performance from behind the arc last night.

Of course, I’d also be remiss if I didn’t mention Lonzo Ball (Lonzo Bull?). Another spot-up shooting option who sank four 3’s himself, it was his 8 assists that pulled many of the strings behind the curtain. Whether it be his normal full-court heaves to sprinting teammates in transition or his extra pass in the halfcourt to keep the wheels in motion, he was the one who kept the Hornets defense on its toes and opened up the floor for his teammates to do damage. The work of a true maestro.

The Chicago Bulls now sit 14-8 and 2nd in the Eastern Conference. A win over this Hornets team wasn’t just an offensive showcase, it was more proof the Bulls are (1) only getting better and (2) worthy of sitting where they do among the East elites. No, an offensive explosion like we saw on Monday night will not be in the cards every night, especially against a physical Knicks team on Thursday, but it’s hard to believe this will be the last time we see it. Karnisovas might as well keep those cigars close by.

Catch the full highlights below: