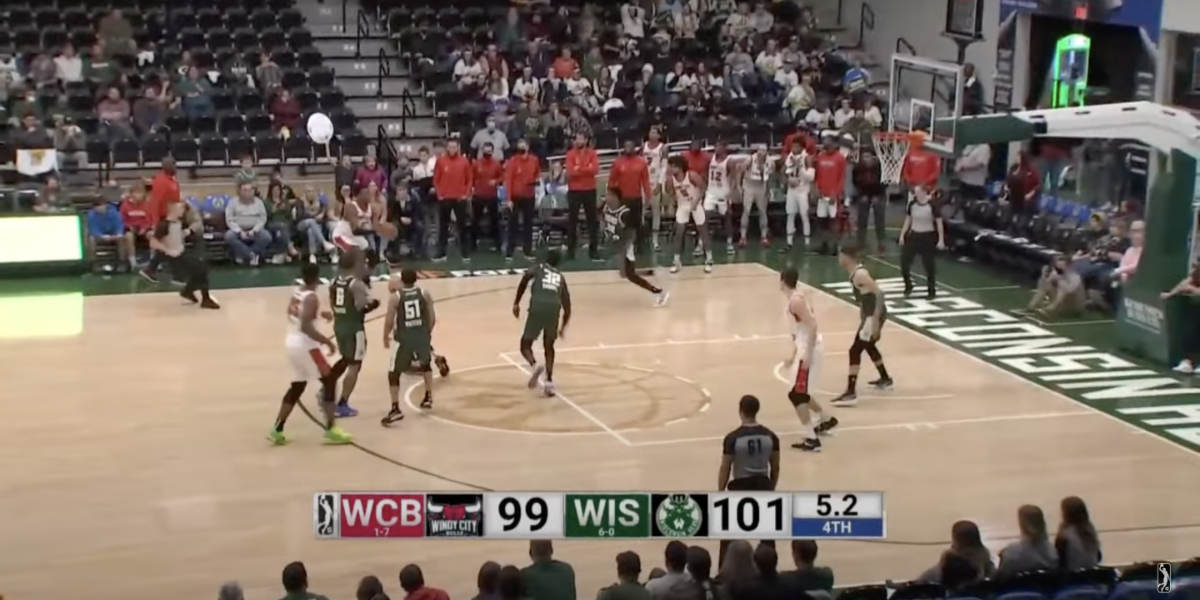 While the Windy City Bulls 2-7 start to the season has been very opposite of what we’ve seen from their big league counterpart, the G-League affiliate pulled off quite the big win on Thursday night.

Despite being down 95-81 with 6:16 left to go in the 4th quarter, the Windy City Bulls walked off the court with a 102-101 victory thanks to a game-winning 3-pointer by Scottie Lindsey. The former Northwestern Wildcat trailed behind point guard Devon Dotson in transition, who cut toward the top of the key to draw Lindsey’s defender and set up the quick catch-and-shoot look with 2.6 seconds remaining.

Watch from the baseline:

Watch from the broadcast:

The Windy City Bulls lost to the Herd two nights prior 124-116, and Lindsey’s shot felt like serviceable payback, especially considering it ended the Herd’s undefeated start to the season.

But while Lindsey played the role of soul-crusher last night, it was the Bulls duo of two-way contract players who dominated the night. Dotson finished with 22 points, 9 rebounds, and 6 assists, including a crucial 5-straight points to cut the Herd lead to just 7 points with 3:49 to go.

He put up 22 PTS, 9 REB, and 6 AST tonight as the @windycitybulls snapped the Wisconsin Herd's six-game unbeaten streak to start the season! pic.twitter.com/l5J4cAWgiL

Meanwhile, Tyler Cook continued to show everyone exactly why Arturas Karnisovas awarded him with a big-league deal after training camp. The Iowa alum had 32 points, 6 rebounds, and 4 steals in what was his second-straight game with 30+ points.

Cook shot 11-15 from the field as he absolutely dominated inside the paint, finishing strong around the rim and flashing some good moves off the dribble.

Tyler Cook couldn't be stopped for the @windycitybulls! He drops his second straight game of 30+ PTS 😤

I know the guys on the floor would say something different … but isn’t this really what the G-League is all about? We primarily want to see individual growth from the guys on the roster (rather than team-wide success), so it’s encouraging to see Dotson, Cook, and Lindsey all have their moments last night.