Knowing how badly the Bulls roster is decimated right now, how could you consider any outcome in tonight’s game a “bad result?” That’s what I told myself for much of the day, especially when Ayo Dosunmu and Stanley Johnson were added to the NBA’s Health & Safety Protocols this afternoon. But I think the Bulls might have found a way to make me change my mind.

It’s been a one-step forward, five steps back type of campaign for Nikola Vucevic this season, and tonight was a game where the Bulls needed him to step up, and he delivered another clunker. The veteran big shot 3-of-15 from the floor and grabbed only eight rebounds against Miami’s backup center. That’s just not going to cut it.

The defense was terrible. Again, the Bulls lacked any semblance of depth, and Caruso is coming off a hamstring injury, but Miami could do whatever they wanted tonight. They wanted to shoot from the perimeter, and they did it to the tune of 19 three-pointers and 49.5 percent shooting from the floor. Duncan Robinson hit 5-of-9 from deep, and Miami shot like they were playing 2K all night. Even Dewayne Dedmon drilled a pair of triples.

Zach LaVine did what he could tonight, scoring 33 points on 55 percent shooting, but it wasn’t enough.

This was a quickie, but what else is there to say about this one? The Bulls came into this one battling a full-blown COVID outbreak, but Miami limped into this one as well, and they had their way with the Bulls from the tip. Kyle Lowry logged 14 dimes, Miami out-rebounded the Bulls by six, and the Heat bench outscored the Bulls bench 40-18.

Oh well. It’s two days off for the Bulls before they host the Detroit Pistons at the United Center on Tuesday night. I’ll leave you with Alfonzo McKinnie hitting a three-pointer for his first points with his hometown team tonight.

OK McKinnie, we see you 👀 pic.twitter.com/zg2ZjhSql6

Speaking of local talent. I’m still mad about the Bulls letting Max Strus get away. I might be a tad biased as I’m wearing a DePaul hoodie as I type this up, but still, I’m mad that they let a solid depth player walk out of the building for nothing. 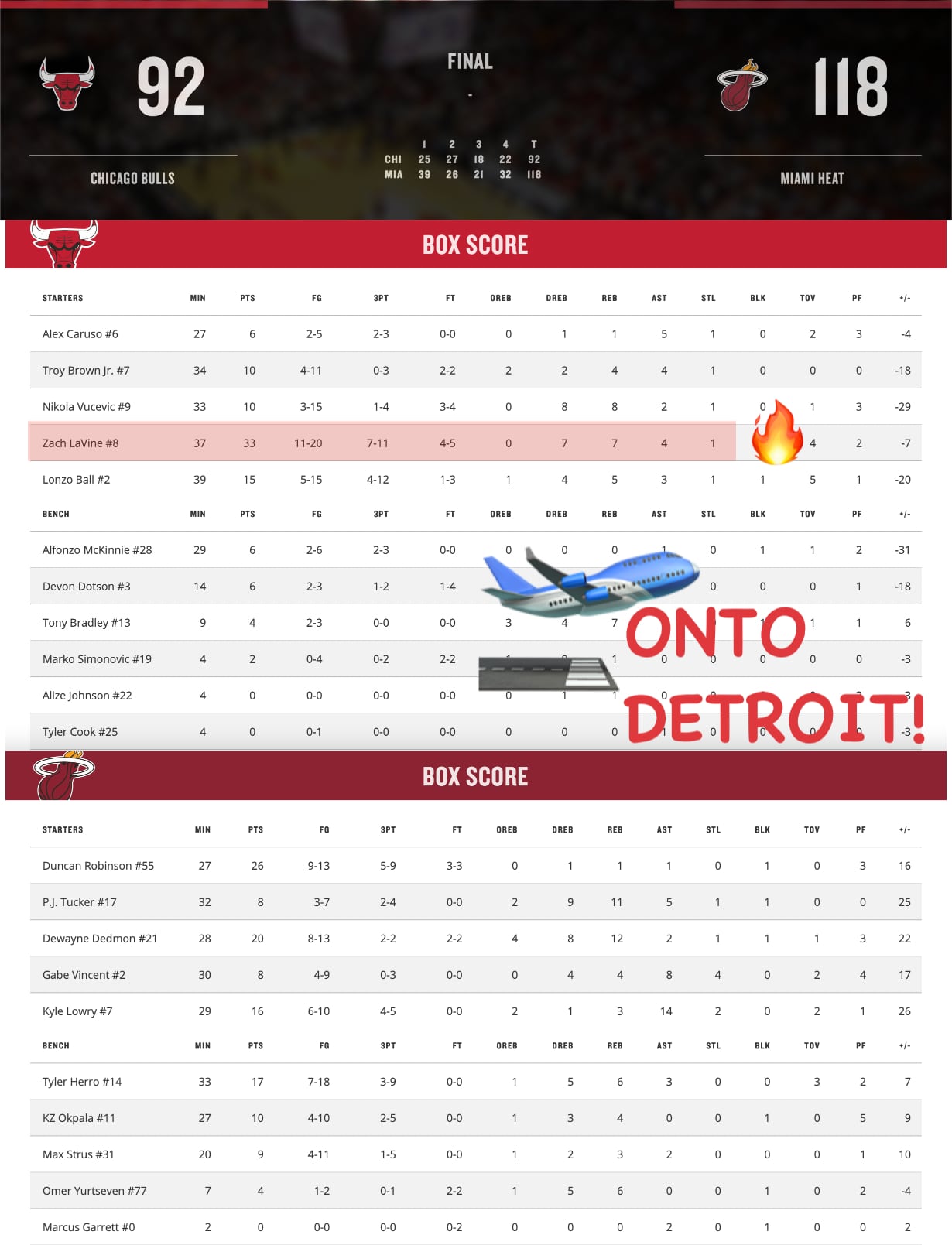