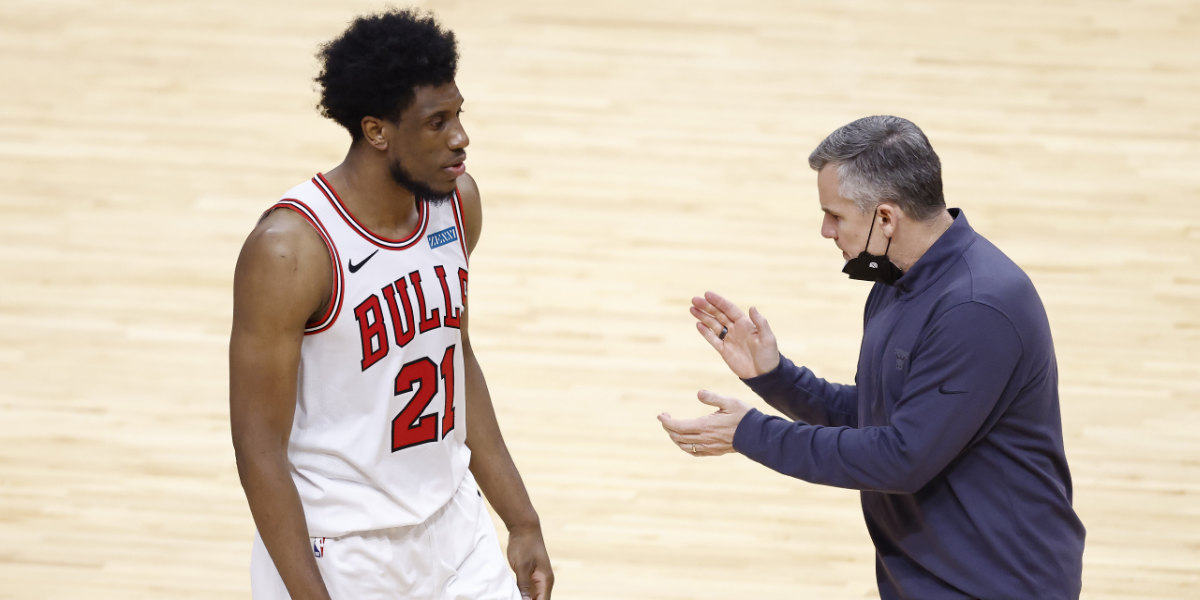 The last time we saw the Chicago Bulls on a basketball court, Spider-Man wasn’t trending worldwide, Stephen Curry wasn’t the 3-point champ, and Justin Fields still had a chance against the Packers. I know, it feels like years ago!

Unless Commissioner Adam Silver steps in over the next 24 hours, the Bulls will make their return against the Los Angeles Lakers at 7:00 p.m. CT on Sunday. The team has missed their last two games due to 10 players entering the NBA’s Health and Safety Protocols. As of today, three of those players have been released from quarantine: Coby White, Javonte Green, and DeMar DeRozan.

Even though these three players have officially rejoined the team, their availability for tomorrow’s game remains up in the air. They have all assumingly been able to participate in individual workouts, but the team has failed to get clearance for group activities … until now!

DeMar DeRozan is Officially Out of NBA’s Health and Safety Protocolshttps://t.co/MsoPC91jQd

•   According to NBC Sports Chicago’s K.C. Johnson the Bulls have finally gotten the thumbs up they needed to hold practice. While the individual work likely helped White, Green, and DeRozan get back into some groove, there is no question the Bulls will have to see how all three stack up in group activities before deciding how to use them tomorrow night.

Bulls have been cleared to practice on Saturday.

•   A 10-day hiatus may not seem all that damaging, but we have to remember these 10 days were potentially spent playing Warzone on the couch. Professional athletes are creatures of habit who generally follow strict routines to keep their bodies right, especially in-season. Stripping that away for even a little over a week can come with its obstacles, which is why I will not at all be shocked if the Bulls take a somewhat cautious approach with all returning players against the Lakers. All three may be on some kind of minutes restriction, with White perhaps being the exception (been out of quarantine the longest).

“Hopefully it won’t take too long before I get back to where I was,” Vucevic told NBC Sports Chicago after his first game out of protocols back in November. “It’s hard because I had to just lay around my house. I couldn’t work out or do anything at all. You do that for 10 days and then you work out for three and you play, it’s not easy. I just hope I can build on it.”

•   You know who I miss? Thaddeus Young. Listen, I think we can all agree now that if the San Antonio Spurs ask for Young in a sign-and-trade for DeRozan, you do that 10 times out of 10. What DeRozan has done for this team already has been borderline MVP-caliber, and the largely criticized offseason deal now looks like one of the best. With that said, it’s hard to deny Young would be a good fit for this undersized Bulls team. The veteran would have been a luxury with the injury to Patrick Williams, and his active hands combined with his interior passing skills would have fit on both ends of the floor somewhat effortlessly. So when I see fans hoping for a quick reunion, I totally get it, even if it’s basically impossible

•   Young has already become a popular name in trade conversations, but the Bulls are literally forbidden from being a part of that conversation. The NBA rules state that a team can not re-acquire a player in the same season in which they traded him. And, yes, the most recent CBA appears to have made this include buyout situations. According to Hoops Rumors, “a player who is bought out or waived after being traded can’t re-sign with the team that traded him away until the one-year anniversary of the deal, or until the July 1 after his contract ends, whichever comes first.”

•   Also, even if Young was eligible to make a snappy return to Chicago, I’m not 100 percent sure he would do it. While he did say in a recent interview with Yahoo Sports’ Chris Haynes that he holds no ill-will toward the Bulls organization, he did make it clear that he was not happy with how his exit from Chicago went down. According to Young, he found out that he was headed to San Antonio at the same time everyone else did on social media.

“One of the biggest things for me has always been transparency and communication. That was one of those parts where I was just like, ‘damn, I could have at least got a phone call.’

I was told I was probably going to be coming back. I always know that anybody can be traded on any given day and things I happen. But I just wish I got the phone call like, ‘before this trade comes out or this rumors comes out let me get on a call with Thad and let him know we’re sending him to San Antonio,’ Young told Haynes on the Posted Up Podcast.

•   Young still said he understands the business of basketball, and he made it known that he still talks to plenty of people inside the Bulls organization, including Billy Donovan, Zach LaVine, and Patrick Williams. So, again, there doesn’t appear to be any real hostility toward the organization as a whole. But there is also no denying this is a pretty crappy way for things to end. While I know talks move fast in the NBA trade market, I can agree with Young that a phone call from AKME about his potential departure would have been best.

•   Out of hand is an understatement …

On an NBA Board of Governors call Friday, there was an overwhelming sentiment among NBA owners to do whatever is necessary to avoid postponements and cancellations this season, sources said. https://t.co/C9LDII4jws

•   Wendell Carter Jr. suffered quite the scary leg injury last night, but the MRI brought back some good news.

Wendell Carter Jr. was helped off the court after an apparent knee injury 🙏 pic.twitter.com/9GV4TBAw6b

Carter, who traveled with the team on their 3-game road trip, is doubtful for tonight’s game at Brooklyn. His return will depend on how he responds to treatment.