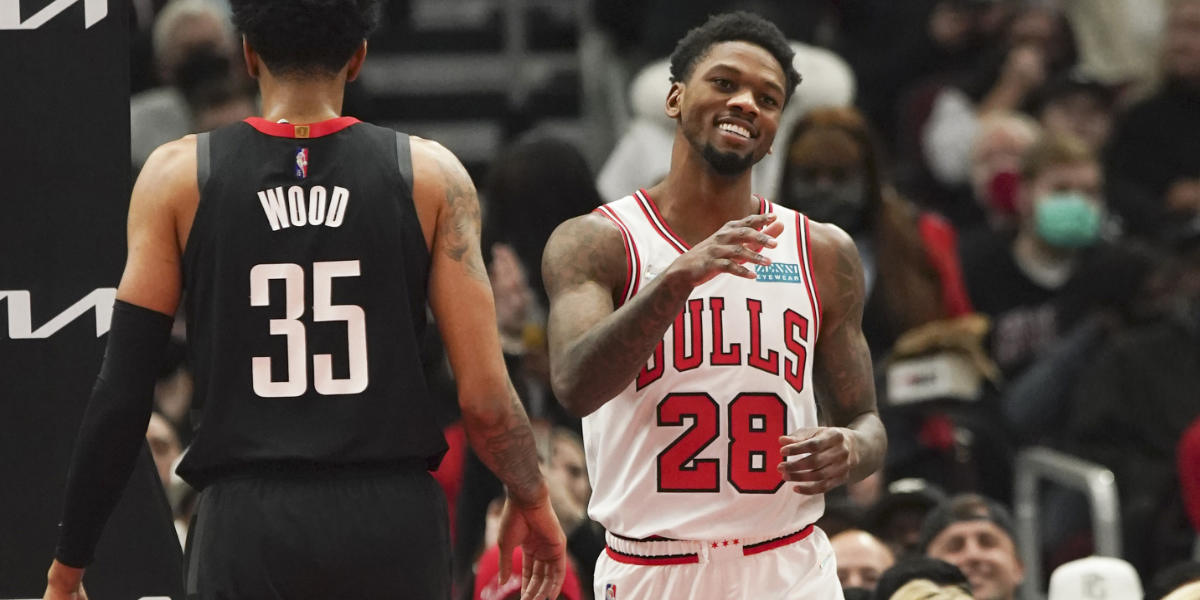 In the midst of an NBA season that has turned out to be more chaotic than Benny the Bull in a china shop (broken vases and popcorn everywhere), I think we all need a feel-good story.

Alfonzo McKinnie has been nothing but a pleasant surprise since joining the Bulls on a 10-day hardship exemption back on December 10th. He flew to Miami and immediately played 29 minutes for the depleted team and followed that up with 17 minutes in the Bulls bounce-back win against the Los Angeles Lakers on Sunday night. The Bulls saw all they needed to hand the veteran forward a second 10-day contract, one that he signed before a big-time outing against the Houston Rockets on Monday.

McKinnie scored 16 points in his 29 minutes of action, which was his most since October 29th, 2018 when he played for the Golden State Warriors. He also tied his career-high with four buckets from downtown, showing the Bulls he’s plenty comfortable wearing red.

“I feel like I played pretty well,” McKinnie laughed. “My main goal is to come in with any opportunity and come in an take full advantage of it, no matter what it is. I just want to go out each night, whenever my number is called, go out and put in max effort.”

Considering McKinnie grew up just minutes away from the United Center, it’s hard to be shocked by his comfortable demeanor. The 6’8″ forward played his first couple of seasons of high school basketball at Curie before finishing at Marshall. McKinnie then took a trip to Eastern Illinois University before transferring to play at the University of Wisconsin – Green Bay. He grew up an underdog, someone playing at midmajors for five seasons before briefly bouncing around the international circuit.

Eventually, as all paths seem to lead, he found himself back home for the inaugural season of the Windy City Bulls. The Bulls G-League affiliate helped McKinnie receive the exposure he needed, and off he went to fill needs for the Raptors, Warriors, Cavaliers, and Lakers.

So when McKinnie got the call while playing with the Mexico City Capitanes to come help the Bulls next, his reaction made all the sense in the world.

“I was just so excited,” McKinnie said. “My mom was the very first person I called. My mom is my best friend. It’s honestly a dream come true. Me being from here, growing up watching the Bulls, just being from the West side of Chicago.”

I’d take a bet the McKinnie smiled more during his conversation with reporters than most kids will on Saturday morning. The memories he had of watching this team as a kid seemed to sit right there alongside him, and it’s hard not to root for a guy who just seems happy to be anywhere near the building.

“I remember being in the house with my grandmother, and I used to try to rush to the TV to catch the intro for the Bulls game. I always thought the Bulls had the dopest intro. Even now, just standing on the court and hearing it and seeing the Bull run through the other team’s bus and stuff, like that’s something I remember being excited to see as a kid,” McKinnie said.

I don’t know. Maybe it’s silly to harp on a guy who may not even be in town next week. But it’s hard not to love everything about McKinnie’s story and his attitude, especially during a time when everything around the league seems so bleak. The resilience he’s shown to carve out an NBA career is kind of what this city is all about, so why make him leave it now?

We talk a little more about that in here …