The first quarter had me sweating.

When it was announced Trae Young would rejoin his team after a stint in health and safety protocols only two hours before tip-off, this became a whole new ballgame. Sure, the Hawks still had a list of double-digit players on the injury report, but they had the NBA’s 5th-leading scorer back in their starting lineup. Add in the fact that the Bulls were missing their top-two perimeter defenders in Lonzo Ball and Alex Caruso, and the stage was set for a well-rested Young to take over.

The All-Star did just that in the first quarter as he cooked Coby White possession after possession on his way to 12 points. Meanwhile, the Hawks’ own third-year player, Cam Reddish, added 11 of his own points, pushing the Hawks into the driver’s seat with a 36-point first quarter.

Fortunately, acting head coach Chris Fleming noticed a change was desperately needed, and rookie Ayo Dosunmu got Young duties to start the second frame. The rookie proceeded to shove the defensive momentum in Chicago’s favor, further showing the NBA why it was a mistake to let him tumble down the draft board on July 29th. His length and speed kept him tied to Young’s hip, and he was an instrumental part of the Bulls flipping the script as they walked into the locker room up 69-63.

The other reason the Bulls found themselves back on top … the inevitable bucket-getting of Zach LaVine and DeMar DeRozan.

Zach LaVine had just 6pts when he entered the game with 8:16 to go in the half. DeRozan had 17pts.

LaVine went on to finish the half with 23. DeRozan finished with 21.

Over the next two quarters, the Bulls would simply do what they do best: Share the basketball.

The trio of Zach LaVine, DeMar DeRozan, and Nikola Vucevic hit clutch shot after clutch shot as they continuously spoiled any hope of a true comeback effort by these depleted Hawks. The three finished the night with a combined 89 points and 25 assists. Yes, you read that right. DeRozan had his second double-double of the season with 10 of those assists, and Vucevic grabbed his second-most rebounds of the season with 17.

I keep waiting for these Bulls victories not to slap me across the face. But I think the fact I leave each win as giddy as the one that came before it shows how truly special this group is. The best teams don’t plateau. Even when the expectation might be to walk away victorious, they find a way to do it in an improved fashion that leaves our jaw in the basement. The Bulls somehow continue to do that night in and night out in the face of adversity, and it has me tearing down any kind of ceiling for what this team can accomplish. 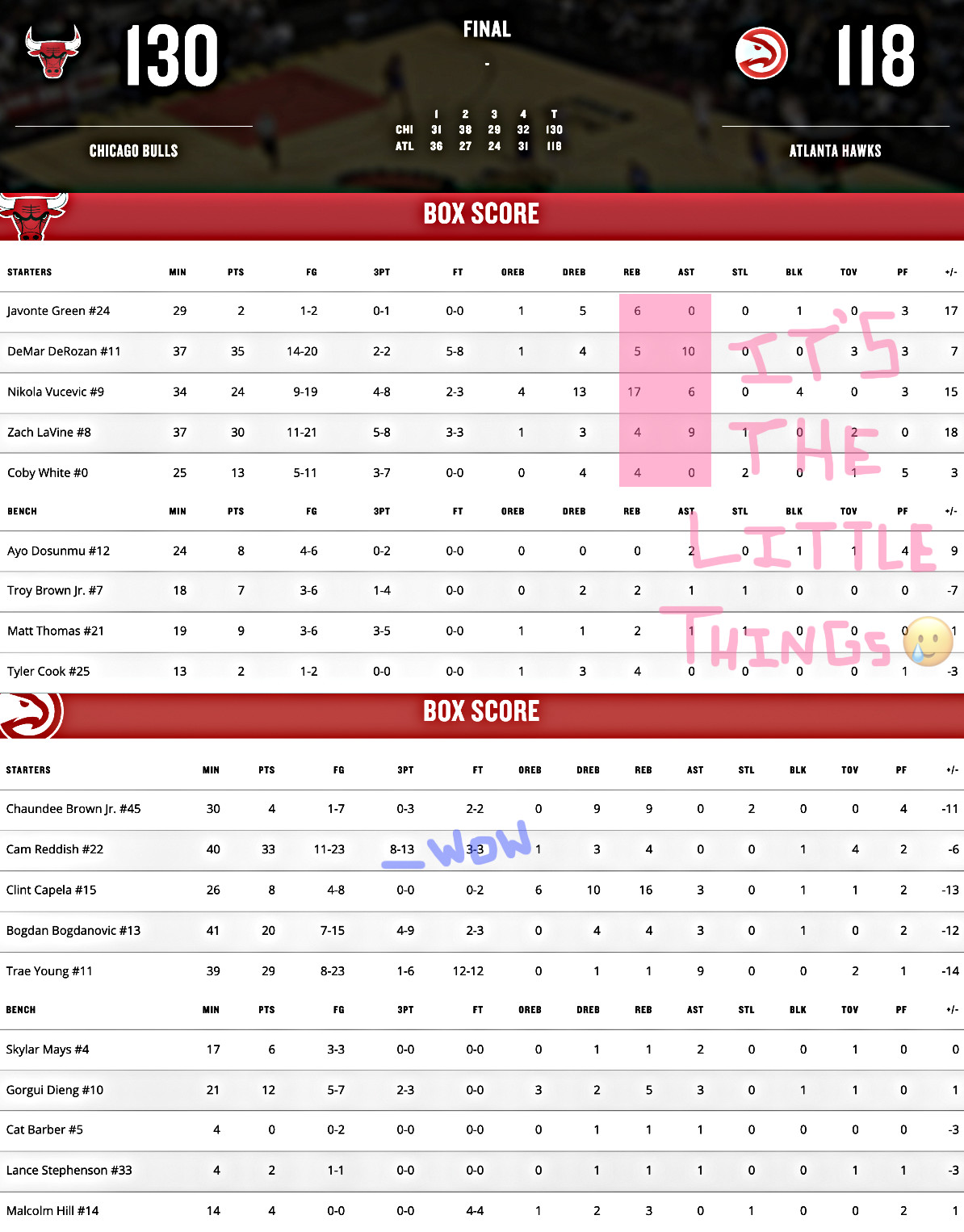