After Ayo Dosunmu traveled on Friday night against the Washington Wizards, three-time All-Star Bradley Beal decided to lend the rookie a helping hand.

“After the travel, the play before I scored, he was like ‘just go deliberately. Go deliberately one way and just get to your shot. Don’t think about it, just take it and drive and then get into your spot,’ Dosunmu told reporters. “The next play I did it on him, and he was like, ‘I didn’t say do it on me, I said do it in the future.'”

*snorts milk out of nose with laughter*

Not only is that such a hilariously savage move by the relatively calm and collected Dosunmu, but it just goes to show how quickly the Bulls 38th-overall pick can pick up on things. This quick-learning has been on full display this season, as Dosunmu has carved himself out a pivotal rotational role with the first-place team in the Eastern Conference just 32 games into his NBA career.

In Friday night’s showing against the Wizards, Dosunmu scored a career-high 18 points to go along with 5 rebounds, 4 assists, and 2 steals.

Heads up New Yorkers, because today’s bonus is ridiculous: Click here and use Caesars NY promo code BLEACHERXLNEW to get a $300 registration bonus plus a deposit match of up to $3,000.

Make sure to watch Dosunmu talk about his exchange with Beal below:

Bradley Beal gave Ayo Dosunmu advice during the game and it backfired 😂 pic.twitter.com/fz9qMPgrn8

Also, it looks like we may have a shot of the very bucket Dosunmu is talking about below. NBC Sports Chicago’s Rob Schaefer points out that Beal gives the slightest frustrated head shake after the baseline jumper falls through the net.

The bucket in question (notice Beal shake his head after it goes in) pic.twitter.com/pINXqWLRgZ 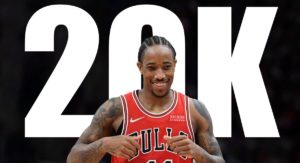