I said it in the weekly preview, and Eli said it in today’s Bulls Bullets; the Bulls can’t come out and try to sleepwalk through this scrappy Detroit Pistons team. Of course, they did, and the Pistons jumped out to an early lead before Billy Donovan called a timeout with the Bulls trailing 11-5 after just two and a half minutes.

Donovan turned to Ayo Dosunmu at 8:51 to play in the first, and the rookie guard rattled off eight points in eight minutes before the first quarter was over. Dosunmu and DeMar DeRozan combined for 17 points in the first quarter helping the Bulls jump ahead by one. Even after the Bulls went up by 14 at one point in the second quarter, it wasn’t until the second half where the Eastern Conference’s top team woke up and began to play like they were playing a nine-win Detroit team.

A big reason the Bulls were able to stick with the Pistons through their slow start was Ayo Dosunmu, who played a 13:51 stretch between the first and second quarters in which Dosunmu registered a +10 according to NBC Sports Chicago’s Rob Schaefer. Simply put, Ayo was huge in that first half. The rookie who plays well beyond his years would score 10 points on 4-of-9 shooting in 27 minutes of work.

“I just felt like we needed a jolt,” Billy Donovan said regarding his decision to turn to Ayo Dosunmu as early in the game as he did and ride him for nearly 14 minutes of game time. Donovan continued to explain his decision to go with Ayo, explaining that his energy, his defense, and his motor were what led to his decision here tonight.

“Ayo has always been a really good motor guy,” Donovan said to the media after the game. “I just went with Ayo because he always comes in with a mentality to defend and disrupt and be aggressive.”

Watch Ayo save DeMar DeRozan from a technical foul here. Just another example of Dosunmu playing like a seasoned veteran, providing the Bulls with a great weapon off the bench this season.

Ayo's been reincarnated from a '90s vet 😂 pic.twitter.com/B0hoFIwhe8

The Pistons might have hung tough with the Bulls in the first half, but whatever Billy Donovan said to his team in the locker room at the half did the trick because the Bulls came out firing in the third quarter, and the fat lady was singing before the fourth quarter even began in this one.

The Bulls opened the third quarter on a 17-0 run and extended their lead to 26 points when the Pistons called a timeout with 7:57 to play in the quarter, still searching for their first basket. Nikola Vučevic outscored the Detroit Pistons (16-14) himself in the third quarter and ended the quarter with 22 points, eight rebounds, and four assists.

DeMar DeRozan logged an efficient 20 points on 8-of-13 shooting and nearly messed around and had a triple-double with 12 rebounds and seven assists on the night. DeRozan might have gotten it if the starters weren’t pulled from the game with more than nine minutes to play. Either way, the Eastern Conference’s leading vote-getter among guards was looking like a professional scorer on Tuesday night.

Compton's in the HOUSE! 🌪 pic.twitter.com/jUcLyczQMO

This Lonzo Ball triple was the 29th assisted basket for the Bulls on the night. It put them up by 37 points with 9:16 to play, effectively ending the night for the starters as the Bulls flipped the page to Brooklyn with nearly a quarter left to play tonight, an ode to the firepower that this team has when it’s all clicking.

HOT SAUCE FOR EVERYONE pic.twitter.com/TvvEUd8VB0

The victory over the Pistons moves the Bulls to 27-11 on the season. 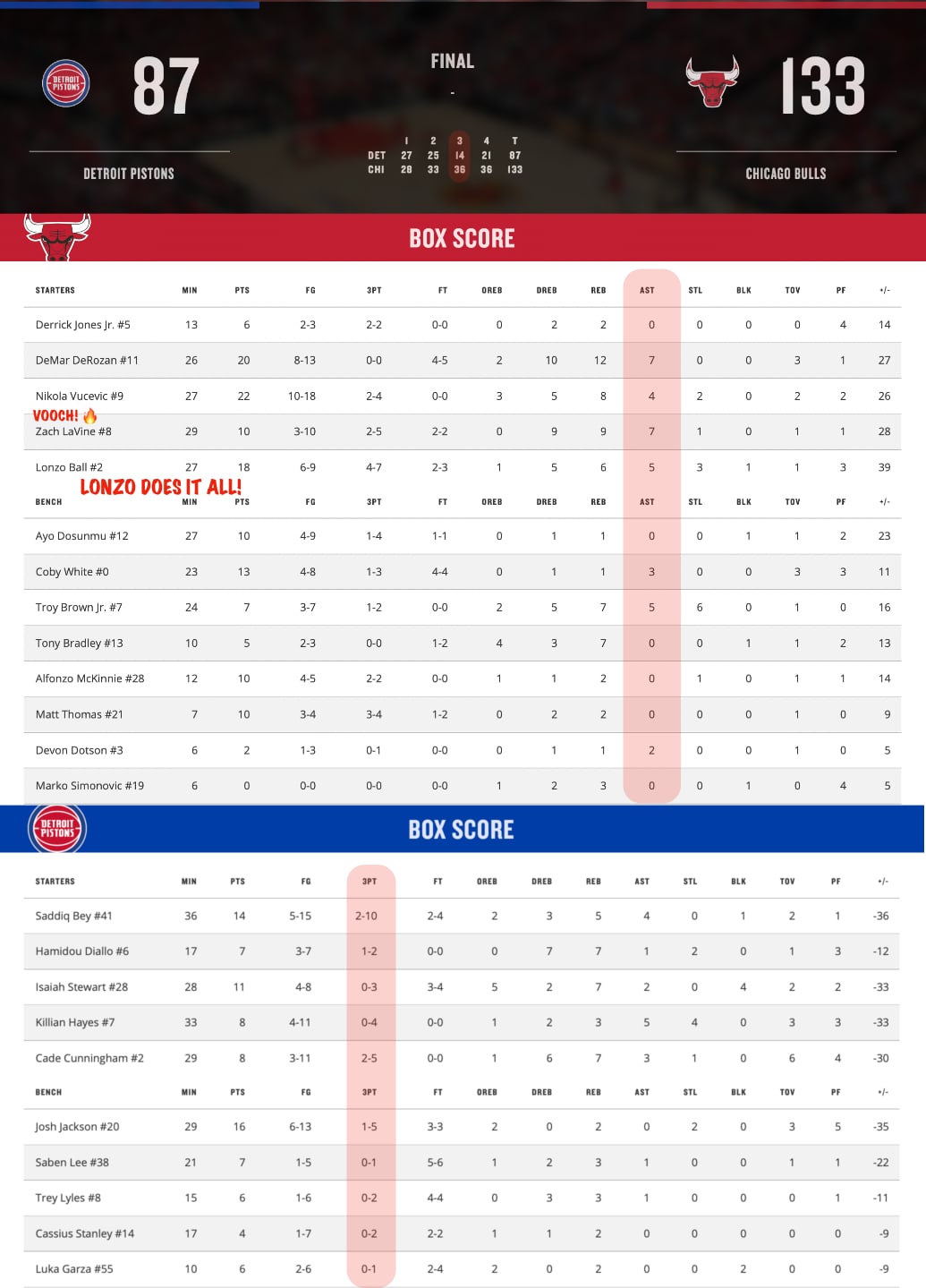