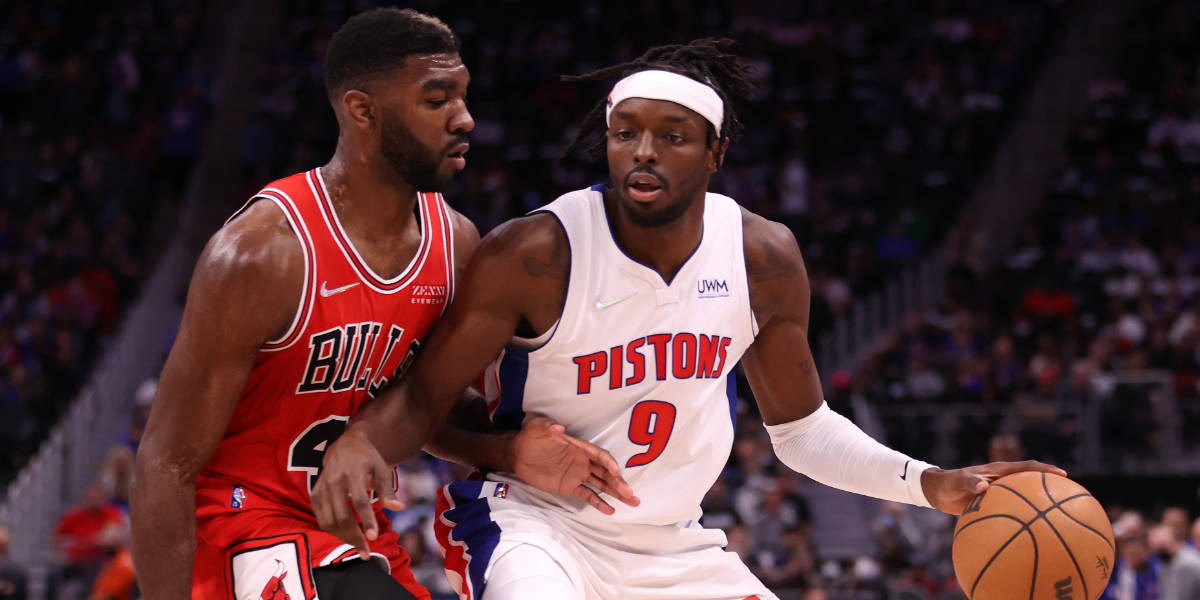 In the wake of a knee injury to Derrick Jones Jr., which will reportedly sideline him for 4-to-6 weeks, K.C. Johnson reports that the Bulls have been tied to Pistons forward, and oft-rumored trade target, Jerami Grant.

The Bulls are one of several teams linked to Jerami Grant. A package of Williams, Jones Jr. and the protected first-round pick from Portland is the likely asking price for Grant. Multiple league sources said the current leaguewide impression is that Karnišovas values and intends to keep Coby White, whom coach Billy Donovan recently called “a winning player.”

If you’ve been following along this (rumor) season, you know the Bulls-Grant connection isn’t entirely new or out of nowhere. Not only do Arturas Karnisovas and Billy Donovan both have prior experience with the 27-year-old forward*, but the organization has also seen itself thrust into a very clear competitive window this season with a pretty obvious hole to fill (especially after injuries to Derrick Jones Jr., Javonte Green, and, of course, Patrick Williams). No one would be surprised if the Bulls looked to add a more win-ready piece at the power forward position before the upcoming trade deadline, and Grant, who’s reportedly available, makes sense for a number of reasons.

But let’s get a little more specific on what makes him so attractive: Grant burst onto the scene last season, averaging 22.3 points, 4.6 rebounds, 2.6 assists, and 1.1 blocks per game. And while those numbers may have come on a 20-win Pistons team, it was still a breakout campaign that put him on the map for contenders around the league. Grant’s prior experience playing a successful 3-and-D role with the Denver Nuggets – who advanced to the Western Conference Finals during the 2019-20 season with Grant starting 16 of 19 playoff games – also demonstrates what he can bring to a winning squad.

If Grant were to buy into a similar role in Chicago, he would significantly improve this team’s two-way potential. He is a lengthy and switchable defender who can help guard positions one through five. Meanwhile, he has greatly improved as an off-the-dribble scorer, giving the Bulls yet another player who can create his own shot.

But as we’ve addressed in recent weeks, and as Johnson mentions above, any deal for Grant would likely require the inclusion of Patrick Williams and the Portland 1st round pick (the inclusion of Derrick Jones Jr.’s expiring contract is likely more about salary-matching than return value). Not only does that logic track alongside our own expectations, but The Athletic’s James L. Edwards III also reported that Williams was a player the Pistons were high on in the 2020 NBA Draft.

But is that really a price the Bulls are willing to pay right now? And even if you set the acquisition cost aside, is that a move the Bulls want to make?

Williams represented this front office’s first draft selection, and Karnisovas recently shared how much he loved this current roster and how wary he was of messing with the chemistry. While Grant surely fills a position of need and bolsters the overall talent level on this roster, he will cost quite a lot to acquire and could shift whatever power structure currently exists inside the Bulls’ locker room. Winning tends to cure all and you don’t want to over-inflate the locker room psychology piece, but it is a non-zero factor for the winningest team in the East.

What is also fascinating (confounding?) about Johnson’s report above is the belief that Karnisovas is set on retaining Coby White. Don’t get me wrong, I wouldn’t want to trade the suddenly surging and improving White either. But this does fly directly in the face of a recently surfaced report which suggested that Williams was the one this front office would prefer to keep over White.

Of course, the flip side is that a deal centered around White likely doesn’t get you a player of Jerami Grant’s caliber. Now, perhaps that changes if White continues to improve his value in recent weeks, but that fact, alone, is what leaves us in a somewhat confusing place. All I’ve been wondering since the season’s changed is what direction the Bulls would go at this deadline. Would they ride out the roster they have with marginal improvements or would they rock the smooth-sailing boat to potentially increase their immediate Finals chances?

Being linked to Grant suggests the latter, but what Karnisovas has said recently suggests the former (could he just be posturing for leverage?). So I have no clue where the Bulls stand right now … but I do know that is probably just how Karnisovas wants it.