Zach LaVine Checked Himself Out and Headed to the Locker Room in the 1st Quarter of Tonight's Game (UPDATE: Cautious Optimism, MRI Awaits) Skip to content 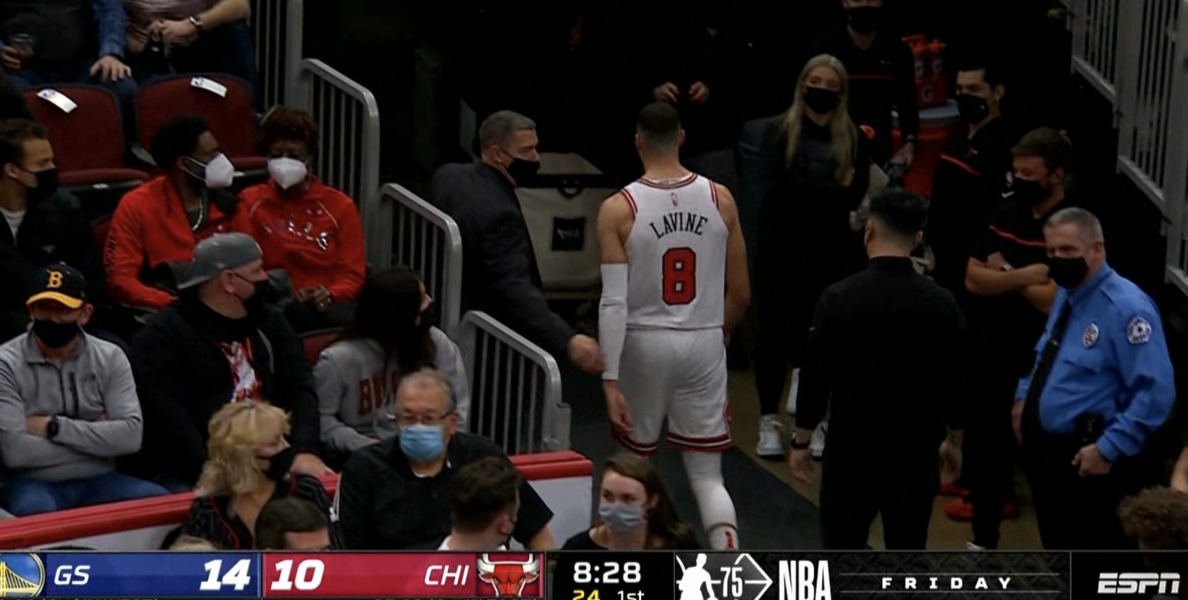 With 8:28 to go in the first quarter, Zach LaVine committed an intentional foul to check himself out of the game and walked straight to the locker room.

The Chicago Bulls All-Star looked comfortable as he headed through the tunnel, needing no help from trainers or showing any noticeable limp. With that being the case, it’s hard to even determine where an injury could have occurred. The ESPN broadcast did replay a rebound that came just before LaVine checked himself out, and he does seem to hop a bit awkwardly off his right foot, but it’s truly hard to speculate.

The main concern right now is this appeared to be a non-contact situation. Those can always be scary, so let’s hope we get a positive update soon on his status. We’ll keep you posted.

The Chicago Bulls have announced that Zach LaVine will not return to tonight’s game due to a left knee injury. Again, there was no clear indication on the court of exactly when or how he may have suffered the injury. Also, LaVine did walk off the court completely under his own power.

All we can do now is wait for an update on the severity, but this certainly leaves all of us with a very uneasy feeling.

Injury Update: Zach LaVine (left knee) is out for the remainder of tonight's game. pic.twitter.com/1jZiLEGxLC

We have reason to be cautiously optimistic.

ESPN’s Adrian Wojnarowski has reported that LaVine will receive an MRI on his LEFT KNEE (this is not a foot injury, as initially speculated) tomorrow. Fortunately, there seems to be “initial confidence” by the Bulls training staff that LaVine’s injury isn’t serious. Of course, while that’s reassuring to hear, we’ll have to wait for the MRI results before we can take a real sigh of relief.

Chicago Bulls guard Zach LaVine will get an MRI on his left knee Saturday, but there's initial confidence that he hasn't suffered a serious injury, sources tell ESPN. It was described as "discomfort" and erring on side of caution with MRI tomorrow.

Remember, the Bulls play tomorrow night in Boston before heading to Memphis on Monday. The expectation for now should probably be that LaVine is not with the team for tomorrow’s game.

Another round of positive news heads our way. NBC Sports Chicago’s K.C. Johnson says LaVine’s MRI could be moved tonight.

Even more encouraging, LaVine left the United Center walking fine (just like he did when originally leaving the game). Johnson also informed us that LaVine has already been playing with some minor swelling, so perhaps tonight he wanted to ensure things didn’t get worse, thus choosing to check himself out of the game when he felt some discomfort.

Zach LaVine’s MRI may get pushed to tonight, but he left the United Center walking fine and is expressing confidence to others the injury isn’t serious, per source. LaVine quietly had been playing through some minor knee swelling, the source said. Tonight’s discomfort added to it

UPDATE (Saturday): The results of the MRI showed no structural damage, so the news so far is good.