We knew that the white-hot Grizzlies were going to be a matchup nightmare for the short-handed Bulls this afternoon, and, well, we were right. Despite a 20-20 first quarter, the Grizzlies made easy work of the Bulls the rest of the way for a comfortable 119-106 MLK Day victory.

The Grizzlies entered today’s contest leading the NBA in fastbreak scoring, total rebounding, and points in the paint, and that was the story of this game. Memphis paced the Bulls, who rank near the bottom of the league in those categories, en route to an 11-point halftime lead.

The Grizzlies entered the game as the NBA's top fastbreak scoring team, top rebounding team, and tops in points in the paint.

Memphis’ ancillary pieces around Ja Morant have been excellent in his absence this season, winning 11-of-13 while Morant was sidelined last month, and the Bulls became a witness of that in the second quarter when the Grizzlies went on a 16-0 run with Ja Morant on the bench. The Grizzlies bench outscored the Bulls bench 51-42, but to be fair, the Bulls’ regular “bench” is essentially the starting lineup these days. Memphis outscored the Bulls 26-9 on the fastbreak and 64-38 in the paint.

Memphis’ 11-point halftime lead turned into a 20-point lead after three quarters, and this one was over before the fourth quarter even started. And things got chippy in the fourth quarter with Tony Bradley and Ja Morant tangling up and Steven Adams eventually moving Tony Bradley out of the picture, likely avoiding a fight between the two sides.

Ja Morant and Tony Bradley getting into it during Grizzlies-Bulls 😳 pic.twitter.com/zFIjUbBU0U

Coby White was fantastic early on, scoring the Bulls’ first eight points of the game but then flamed out, scoring just 8 more points the rest of the way. White logged 12 points on four made three-pointers in the first half but shot 1-of-6 from everywhere else.

I’ve done my fair share of defending Nikola Vučević this season, and rightfully so much of the time, but he was downright awful today in a game where the Bulls desperately needed a strong performance from him. Vučević finished with 7 points on 2-of-13 from the floor and 1-of-5 from three-point land while logging just 10 rebounds. That’s just not going to cut it. Not shorthanded and not at full strength. Vooch has got to be much better.

The birthday boy Ayo Dosunmu recorded another double-double scoring 15 points on 7-of-12 shooting, and logged 10 rebounds, six assists, and five steals in 37 minutes of action.

Sure, it will be nice to get healthier, and the Bulls should have Zach LaVine, Lonzo Ball, Alex Caruso, and Javonte Green back in the next week or so, but the bottom line here is this; the Bulls need to add a power forward to this lineup. They can’t continue to hide that glaring size deficiency behind the high-energy play of Javonte Green or Derrick Jones Jr., or the scoring prowess of Zach LaVine and DeMar DeRozan anymore. If the Bulls want to be serious contenders this season, they’ll need to add some size under the four. The Bulls rank 23rd in points in the paint and 29th in rebounds. Opposing teams kill them down low, which will likely be on display the rest of this week, with Cleveland and Milwaukee looming. 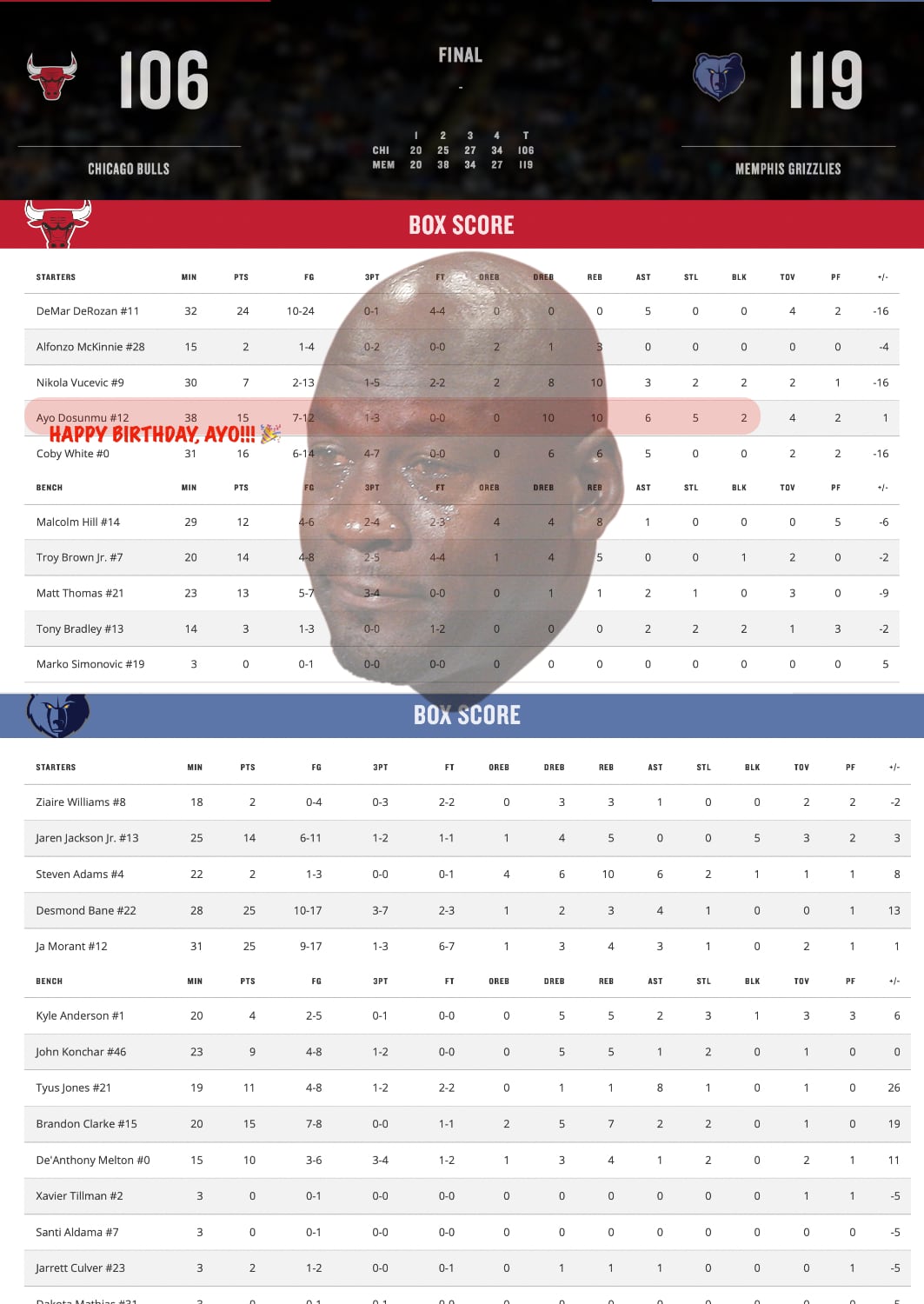