The Chicago Bulls are feeling the losses of Alex Caruso and Lonzo Ball, arguably their two most valuable defenders. Over their last ten games, the Bulls have allowed opponents 116.7 points per game (26th), .498 opposing field goal percentage (29th), and a .391 three-point percentage (29th). It’s no coincidence that they’ve lost seven of those ten games, and Sunday’s contest with Portland started in the same vein, with Portland scoring 35 points in the opening frame.

The Trail Blazers shot a scorching 56.8 percent from the floor and  54.5 from three-point range in the first half. But the Bulls took a 73-65 lead into the locker room thanks to some solid shooting by Nikola Vučević and a great effort from Ayo Dosunmu down the stretch in the first half.

Nikola Vučević scored 14 points and added seven rebounds, and DeMar DeRozan scored 13 and added eight assists in the half.

Ayo assist for the SLAM pic.twitter.com/KVvN5ir6h8

For as good as the Portland offense was in the first half, the Bulls were better in the long run. Billy Donovan’s guys scored 104 points in the first three quarters and 130 in the victory over Portland, their 31st of the season.

Nikola Vučević logged a 24-point, 14-rebound double-double on the afternoon, leading all Bulls scorers on the day. It’s imperative that Vooch continues to play well as he has for the last week if the Bulls are going to keep on winning.

DeMar DeRozan scored 23 and added 10 assists in a double-double, and Zach LaVine scored 20 points. Coby White added 18 points and six assists in 18 minutes of action for the Bulls.

It sure was nice to see the Bulls’ offense turn it on today, and while they covered up the defensive deficiencies that have plagued the Bulls of late, it’s still nothing to get excited about. Sure, there’s going to be a degree of wait-and-see for the Bulls over these next two months until they get completely healthy. Still, the Bulls have three All-Stars on their roster in DeMar DeRozan, Zach LaVine, and Nikola Vučević, and those guys have to play their best basketball of the season to help ensure that the Bulls can weather the storm by beating the teams they should beat.

The Trail Blazers fall into that category, and the offense made sure that they took care of business on their home court, a must for the Bulls in the immediate future. 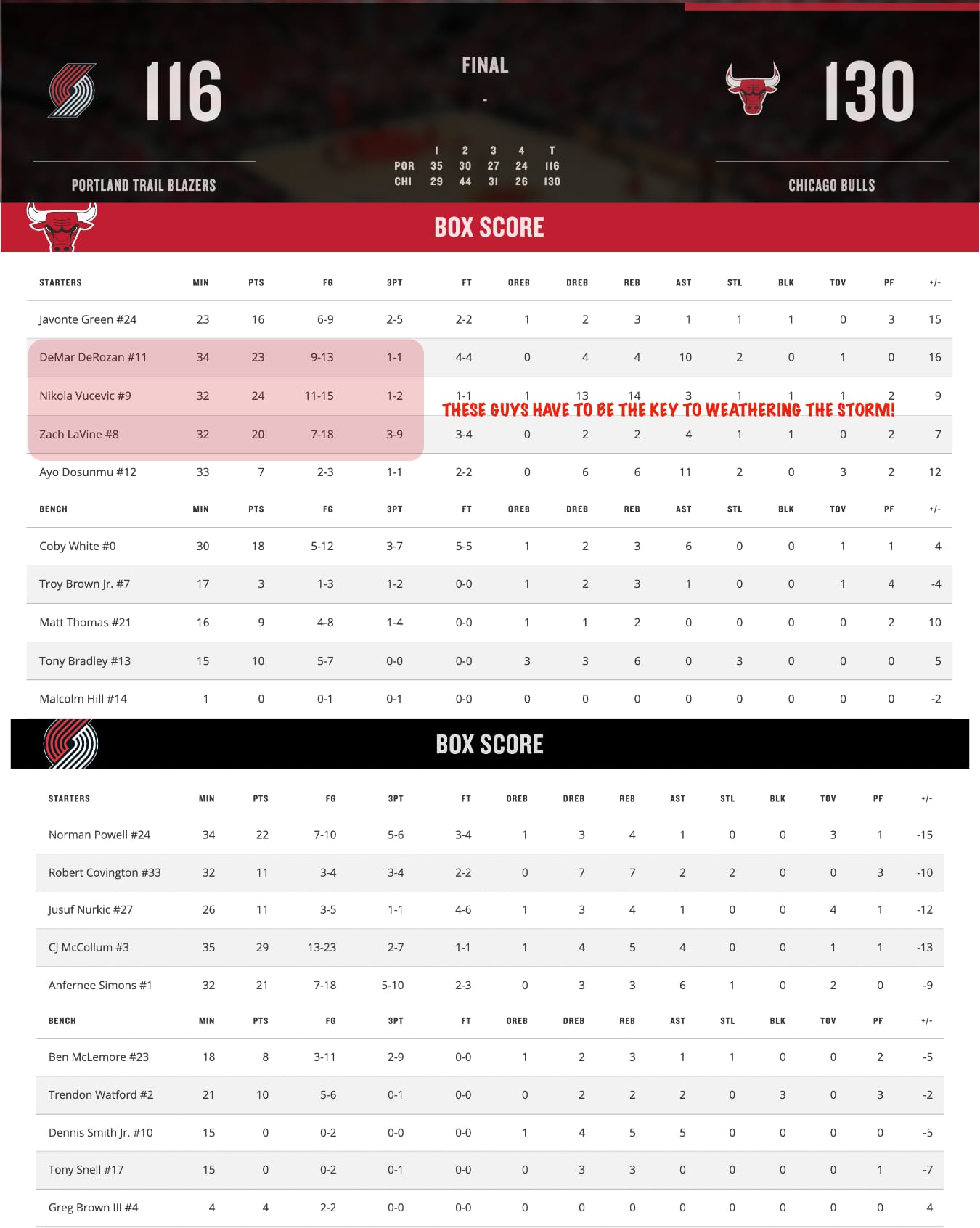