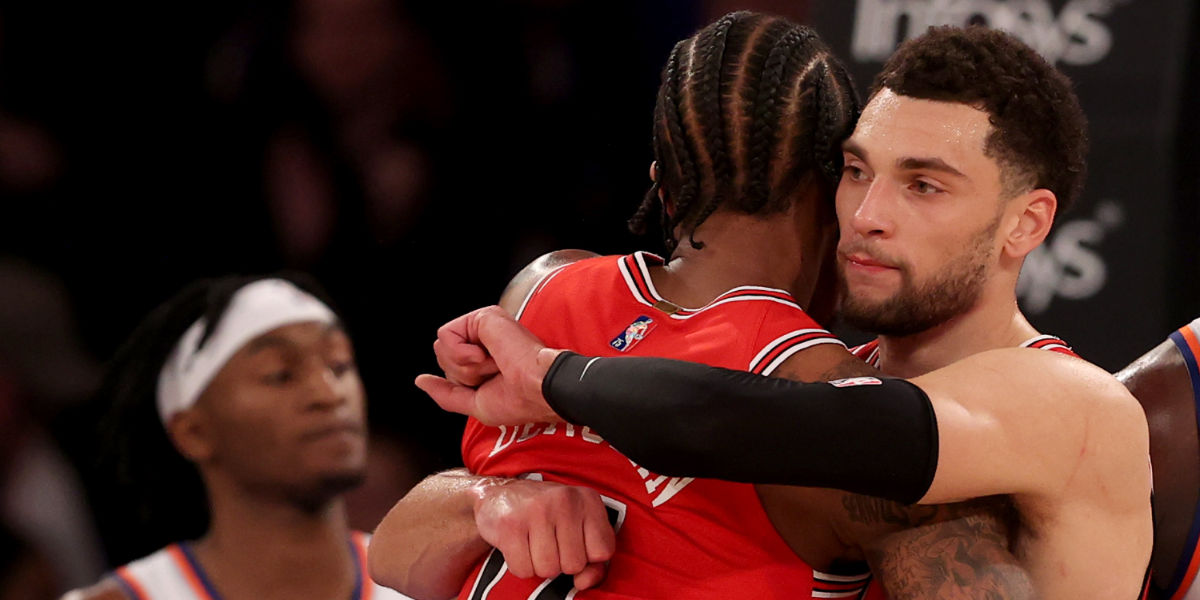 When your heart begins to race, your throat begins to dry up, and you no longer need to drop 30 points to give your team a chance to win … call it love.

Zach LaVine and DeMar DeRozan have not only drop-kicked every offseason doubt into Lake Michigan, but they have done it en route to a first-place standing in the Eastern Conference. DeRozan has proven to be the right-hand-man the playoff-hungry LaVine craved. Meanwhile, LaVine has been everything the matured DeRozan needed to jumpstart the next dominant phase of his career. Each has taken some much-needed pressure off the other’s offensively-gifted shoulders, propelling the Bulls to the 5th-best offense in the NBA.

LaVine and DeRozan are the only two teammates to share a spot inside the NBA’s top-13 scorers. DeRozan is averaging 26.4 points, which ranks 6th-highest in the league and marks his best scoring season since the 2016-17 campaign in Toronto. Even better, he’s doing this on a 52.2 effective field goal percentage that is the second-highest clip of his 13-year career.

As for LaVine, all he has done this season is continue his wildly efficient three-level scoring we’ve seen develop over the past several seasons. His 24.9 points per game on 48.4 percent shooting from the field and 39.5 percent shooting from downtown for a 31-18 Bulls team has put any “good stats, bad team” arguments to bed. LaVine has shown he can be an elite scorer on a winning team – one with an equally gifted bucket-getter, nonetheless.

The Bulls’ rise has been a cautionary tale of label-making, but it still would not have been possible without the admiration between these two All-Stars.

LaVine and DeRozan have spoken highly of one another since the moment it was announced they would team up. To be sure, I know we shouldn’t expect teammates to do anything different, but it’s the way these two talks about each other that feels so important. While they both praise the other player’s individual skills, they more so harp on how much they needed and wanted those skills alongside them on the court.

LaVine talked about all of this in a recent episode of The Draymond Green Show, calling his fit with DeRozan a “match made and heaven” and pointing toward his calming presence, as well as his playoff experience, as something he and the Bulls needed. LaVine also recently did this in an interview with SLAM, reminding everyone that his teammate is still very much a top-tier guy.

DeMar has been this, and DeMar is still in his prime … DeMar DeRozan is a multiple-time All-Star guy,” LaVine told SLAM’s Abe Schwadron. “It’s not like that guy left. It’s weird how the narrative changes. So, when you have the chance to have a guy like that come to your team in the prime of his career, and me entering the prime of mine, I think it was a match made in heaven.”

Of course, DeRozan has returned the favor. The five-time All-Star – who is featured standings next to his teammate on the latest SLAM magazine cover – talked about how special it is for him to take the floor with LaVine.

“Every game, we lean on and count on each other,” DeRozan said. “Every time I step out there, I want to step out there with him and dominate, and that’s the beauty of our friendship, our teamwork, and just the competitive nature that we have. We want to do it together. There’s never a moment where I feel like I want to go out there without him. I need him there every step of the way.”

To take a perfect quote from Coby White: “That’s so love, bro.”

How organically and effortlessly these two stars have built one of the league’s top on-court relationships is part of what has made this Bulls team so special. Through their respect for each other and desire to keep growing, they have vaulted themselves and the organization into a better place. If that’s not a sign of a good romance, I don’t know what is.

You can check out the full Q&A with LaVine and DeRozan, as well as the latest SLAM cover, below …

It's not many true ballplayers left in the League. But DeMar DeRozan and Zach LaVine are about their craft. @SLAMGoods