Can Ayo Dosunmu Eventually Join the Rookie of the Year Conversation? Skip to content 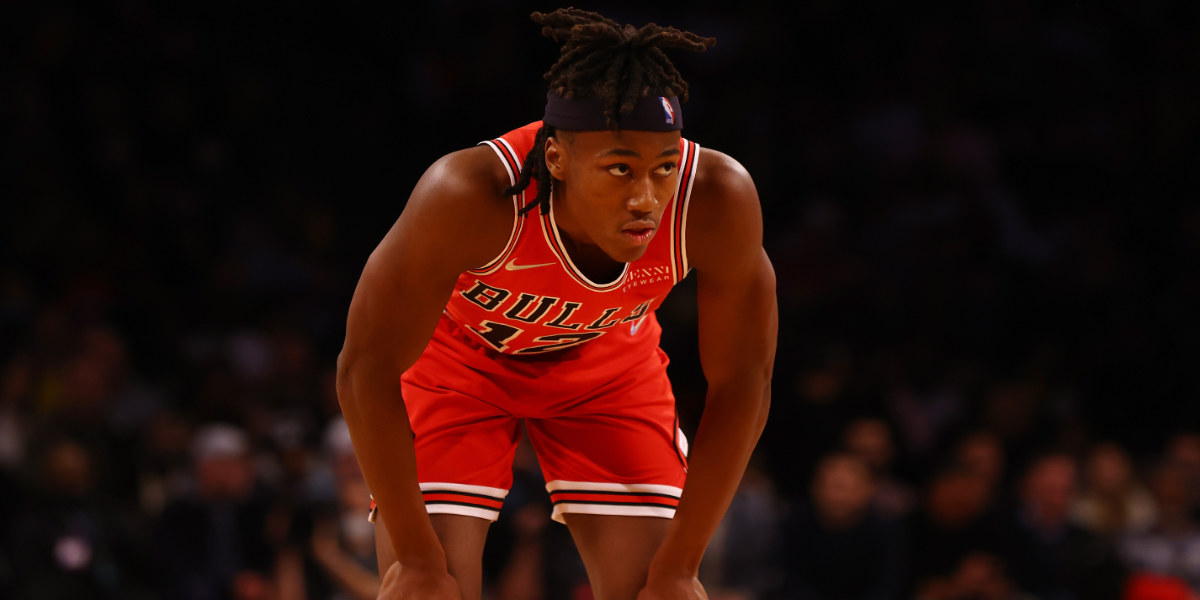 Ayo Dosunmu began his NBA career as a role player coming off the Bulls bench, but rapidly evolved into a mainstay in the Bulls’ second unit (and an interim starter while Lonzo Ball heals up). Already considered to be the steal of the draft (seriously, how did he fall to No. 38?), Dosunmu has taken Chicago by storm and stabilized a crucial role at a turbulent time in an otherwise dream-worthy Bulls season.

But can Dosunmu’s emergence as a bonafide NBA player net him Rookie of the Year honors for the 2021-2022 season? Eh. Probably not. At least not yet. For however impressive as Ayo has been, I don’t think betting on him right now is the right call. HOWEVER, I do think he’s done enough to join the conversation.

Earlier this week, Dosunmu was named to the NBA’s Rising Stars Event … just before he logged 13 points and nine assists on 4-of-7 shooting (3-of-5 from three-point range) in a victory over the Orlando Magic. Dosunmu hit a clutch three down the stretch as the Bulls closed out the pesky Orlando squad, capping off 10th consecutive start in style.

Ayo Dosunmu with the dagger pic.twitter.com/CR5xSWuOqn

Those two qualities – clutch performance and efficiency – have been Dosunmu’s bread and butter this season, and have propelled the No. 38 pick in the 2021 NBA Draft from an afterthought to All-Star Weekend in a matter of six months.

In other words, since stepping into the starting role, Dosunmu has DOUBLED his scoring, rebounding, and shots per contest while upping his assists by 5.3 per game. All the while, the shooting percentage for Dosunmu has somehow gotten even better with the increased minutes and shots.

Why? Because Dosunmu just knows how to play basketball. Just ask Dwyane Wade:

So he’s got the numbers, he’s got a knack for coming through in the biggest moments, and he’s finally getting the exposure and recognition he deserves … is he in the conversation? To answer that, we need to see who Dosunmu is going up against.

Here’s what the top of NBA.com’s latest Rookie Ladder looks like with their stats (as of publishing) and their spot in the NBA Draft:

Dosunmu checks in this week at No. 7.

This year, Dosunmu has two things working against him in his potential Rookie of the Year candidacy; (1) draft position and (2) playing time. Dosunmu fell into the second round and off of the national radar this summer, and his limited role early in the season didn’t help. But, in the weeks that Dosunmu has been in the starting lineup, he’s checked in at No. 8 (January 26) and No. 7 (February 2) on the rookie ladder.

Therefore, it seems fair to believe that Dosunmu’s continued presence in the starting lineup could help elevate him into the discussion for the Rookie of the Year award. At least, if he keeps playing at the clip he has thus far, his numbers should stack up pretty well against the field.

But we can’t just ignore history, either.

The NBA Rookie of the Year award has historically been reserved for lottery picks, with 21 winners being drafted number one overall, and just two drafted outside of the first round. But two is not zero! And we’re not talking about ancient history, either: Malcolm Brogdon, taken with the 36th overall selection in the 2016 NBA Draft, won the award in 2017. What was his season like?

Brogdon’s had a very Dosunmu-like role that season, starting 28 of the 75 games he played in while averaging 10.2 points, 4.2 assists, 2.8 rebounds, and 1.1 steals per contest while shooting 45.7 percent (40.4 from three) for the Milwaukee Bucks, who won 42 games and went to the playoffs before the Toronto Raptors ousted them in the opening round. Granted, the 2016 draft class wasn’t nearly as good as this past draft class, but it did produce five NBA All-Stars (none of them being Brogdon), including Ben Simmons, Jaylen Brown, Brandon Ingram, Domantas Sabonis, and Paskal Siakam.

However, none of those guys had particularly strong rookie campaigns that season. Siakam spent a bunch of time in the G-League and started only 38 games for the Raptors. Jaylen Brown started just 20 games for the Celtics and averaged 6.6 points per game. You get the picture. Sabonis and Ingram averaged less than 10 points per game, and Ben Simmons never saw the floor. This year’s draft class is far superior, both in the immediate impact that the lottery picks are having on their teams and their long-term potential ceilings, compared to that 2016 class.

Will Dosunmu join Derrick Rose, Elton Brand, and Michael Jordan as Bulls to win the Rookie of the Year? I wouldn’t bet on it at this point, but he’s forced his way into the conversation with one heck of a rookie campaign. And hey, who knows? As I said, his numbers as a starter have been comparable to the field, so maybe if he spends the next two months in that role this will be a different conversation.