The Bulls may not have deserved that one, but I was still hoping they’d steal it away from the Raptors in OT. And, heck, they were 0.7 seconds and/or one offensive rebound away from taking it with them in regulation. Alas. A lucky offensive put-back, a Hail Mary in-bound play that wasn’t close, an errant pass from Ayo Dosunmu, and that was that. Bulls lose.

It was a slow-starting first half for the Bulls, who trailed Toronto 54-50 heading into the locker room. The Raptors outscored the Bulls 32-18 in the paint, and Pascal Siakam led the way for the Raptors logging 15 points and six rebounds while shooting an efficient 7-of-13 from the floor.

Despite the Bulls being out-rebounded 30-21 in the opening half, Nikola Vučevic did what he could under the rim, snagging 10 rebounds while scoring 12 points on 5-of-8 shooting (2-of-2 from three-point range). Vooch logged his eighth double-double in his last nine games with his 12-10 first half. So at least there was that.

Still, the Raptors could drive and score in the paint at will, and the Bulls didn’t have much working on offense in the first half, with DeMar DeRozan scoring just eight points and Zach LaVine scoring just five. LaVine would have the same amount of points at the end of the third in 26 minutes, and the Raptors took an 87-81 lead into the fourth quarter.

The Bulls rallied from there, with LaVine scoring 15, as DeRozan got locked in late, helping the Bulls narrow the gap to a single possession late in the fourth quarter. That set up Vučević, who gave the Bulls a 114-112 lead with 8.6 seconds to play on a shot that just narrowly beat the buzzer.

VOOCH WITH THE SHOT CLOCK BUZZER-BEATER IN THE CLUTCH pic.twitter.com/WNda3s85NQ

Unfortunately, the Bulls couldn’t stop the Raptors in the final seconds as Rookie of the Year candidate Scottie Barnes got the tip in to send it to overtime.

And that brings us back to the biggest bummer of the night: Ayo Dosunmu’s errant pass.

For as good as Dosunmu has been this season, his turnover in the final 30 seconds of tonight’s game cost the Bulls dearly. It led to a Gary Trent Jr. three-pointer that put the Raptors up five with 15.3 to play, and was the first time he really looked like a rookie all season. It’ll happen from time to time. The game was over from there, as the Raptors eeked out a 127-120 win tonight.

This loss highlighted a significant flaw for the Bulls, as Toronto killed Chicago on the offensive glass — Toronto’s 22 offensive boards were the most allowed by the Bulls since they allowed 25 to the Knicks in 2019. Even if it’s a secondary/reserve player, the Bulls need help on the glass. Tonight was a stark reminder.

This is also not great:

"It hurts. That’s what happens when you play a 42-minute game with back spasms." — Zach LaVine 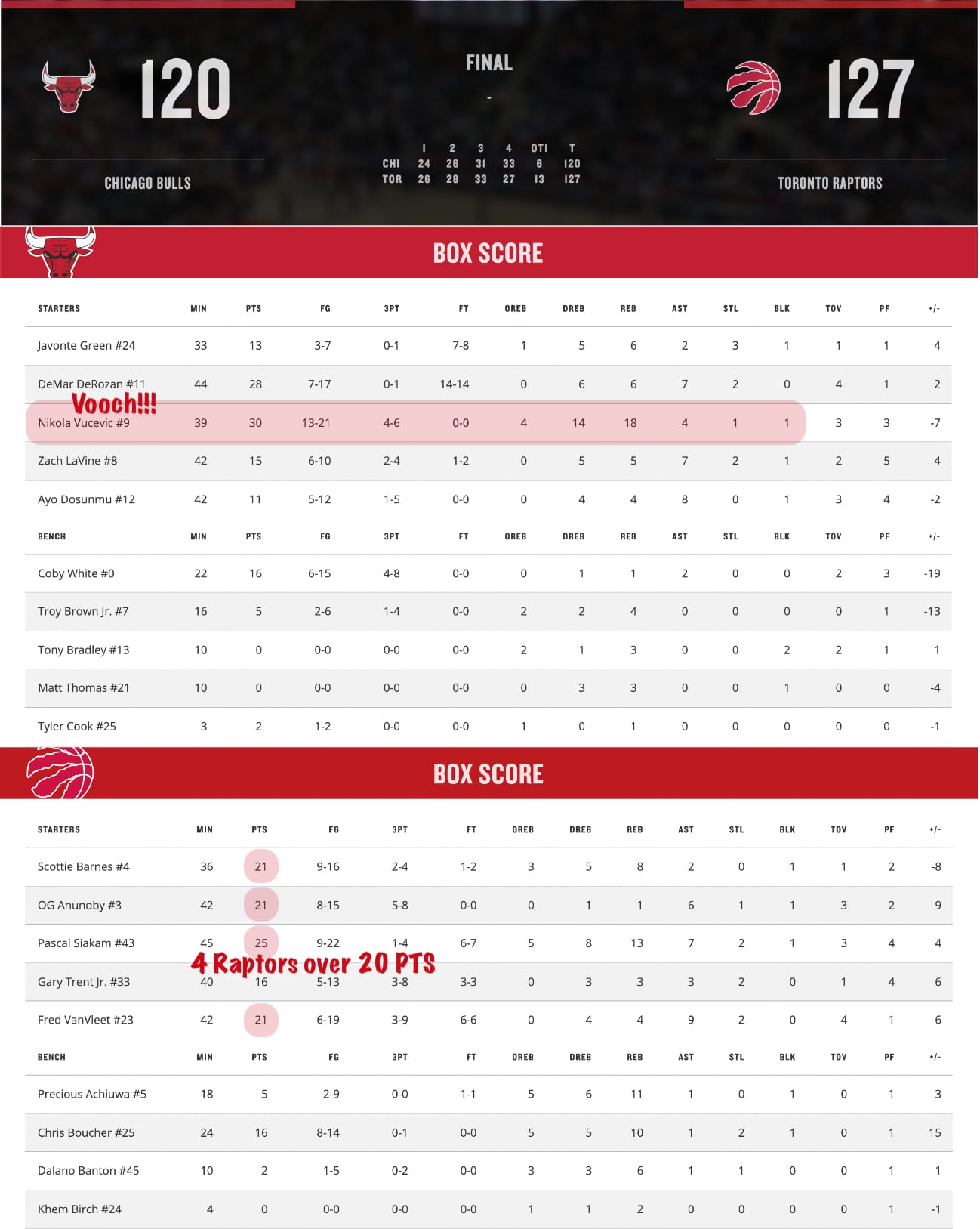