Just hang with ’em. That’s all I needed the Bulls to do tonight to be impressed. In their current state,  if the Bulls could have just hung with the 42-win Phoenix Suns, it would have been a net positive in my book. Instead, the Bulls were never really in this one, as Phoenix blew the doors off the Bulls at the United Center.

The Suns surged out to an early 10-point lead before Billy Donovan called his increasingly signature early regroup timeout. The Bulls would close the gap with a 12-2 run of their own out of the timeout, but that was as close as they would get to Phoenix, who simply outclassed the Bulls on their floor. It was the same ol’ song and dance for the Bulls (of late) tonight, and don’t let the final score fool you; this one was never close despite the Suns taking their foot off the gas down the stretch.

Devin Booker for three, wide open. Green with the closeout attempt, but not enough. pic.twitter.com/DW8OYYI1Yr

The Bulls have struggled mightily on defense without Lonzo Ball and Alex Caruso in the lineup; that’s no secret. With Lonzo Ball and Alex Caruso on the court, the Bulls are a top-10 defensive unit. Without them, they’re a bottom-five defensive unit. But tonight was not one of those nights where I can say that the Bulls would have won if those two were healthy. Devin Booker was getting wide-open looks all night. He poured in 16 points for the Suns in the first quarter and ended the night with 38 points on 14-of-23 from the floor and 5-of-10 from three-point range.

Simply put, the Bulls were caught sleeping too many times on Monday night, setting up looks like this one for one of the NBA’s premier shooters:

Booker has 34 on 15 shots. Don't know how he gets this open. pic.twitter.com/mjFLVONaQe

You can see DeMar DeRozan visibly mad, spiking the ball off the stanchion after Booker’s three fell. Ayo Dosunmu left Devin Booker wide open in the corner as he switched to Chris Paul while the Suns were moving in transition, and the veteran Paul made sure to take advantage of Dosunmu’s rookie mistake.

It’s becoming a rinse and repeat type of thing for the Bulls of late, with opposing teams lighting them up from the floor, beating them up in the paint, and out-running them in transition. And like I said, I know that they’re banged up right now, but the effort from the healthy guys just has to be significantly better.

The game wasn’t without its silver linings, though. Zach LaVine scored 32 in his return from the back spasms that have sidelined him the last two games, shooting 9-of-20 (4-of-7)  and playing 37 minutes in his return. Nikola Vučević logged his 30th double-double of the season and the 10th in his previous 12 games with a 13-point, 12-rebound performance. DeMar DeRozan tried to will the Bulls back into the ballgame in the fourth quarter, cutting the Suns lead to just nine briefly, but it was too little too late for the Bulls. DeRozan scored 38, falling just short of notching his second 40-point performance in as many days for the Bulls.

DeRozan has 35 points so far and is also making passes like this. pic.twitter.com/3BugSYJ77j

The Bulls have now allowed their opponent to score 115 or more points in seven consecutive contests. Yikes. 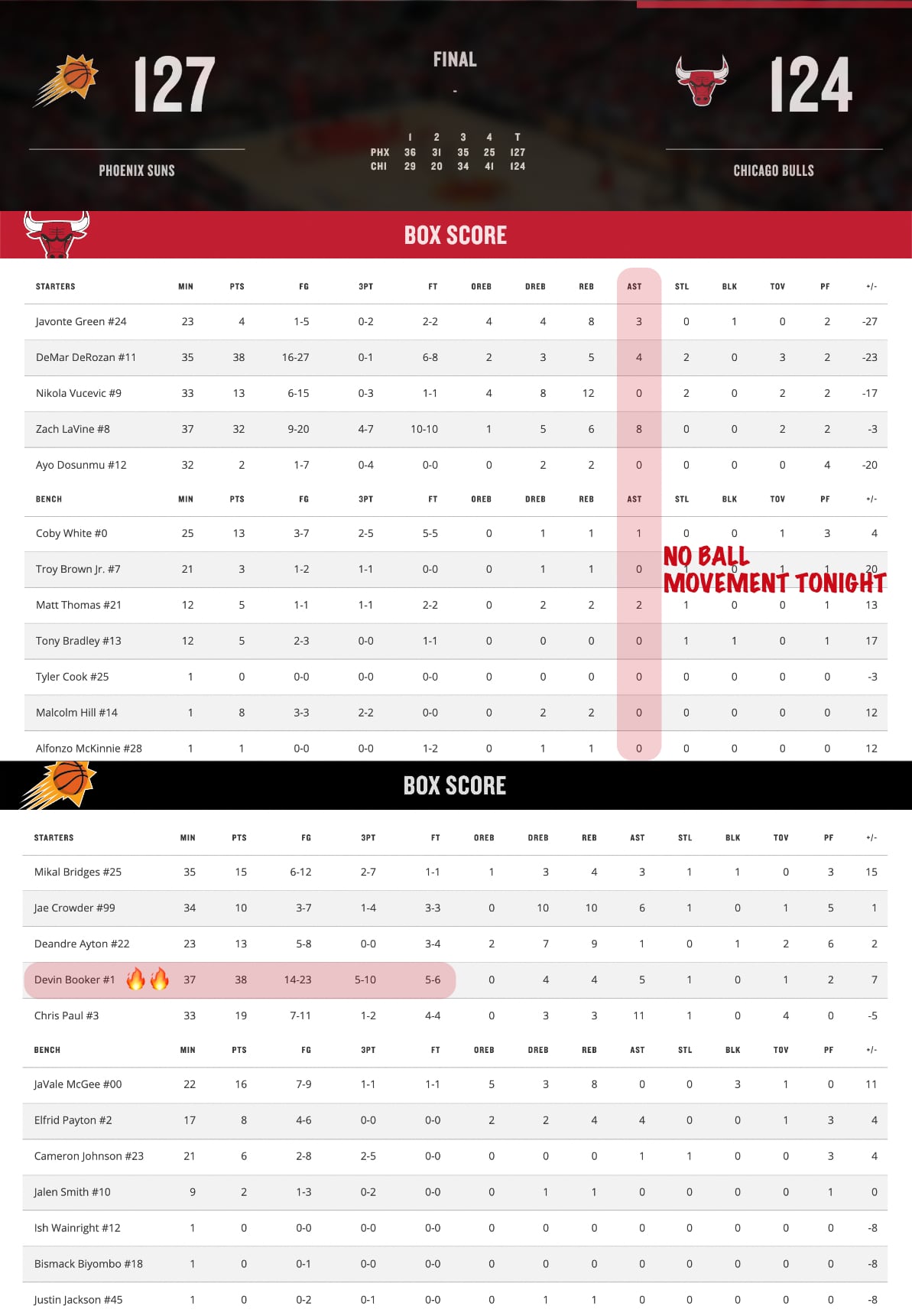