Around the Association: McCollum Cooking in NOLA, What's the Latest on Zion? Philly is Perfect for Harden (For Now), More Skip to content 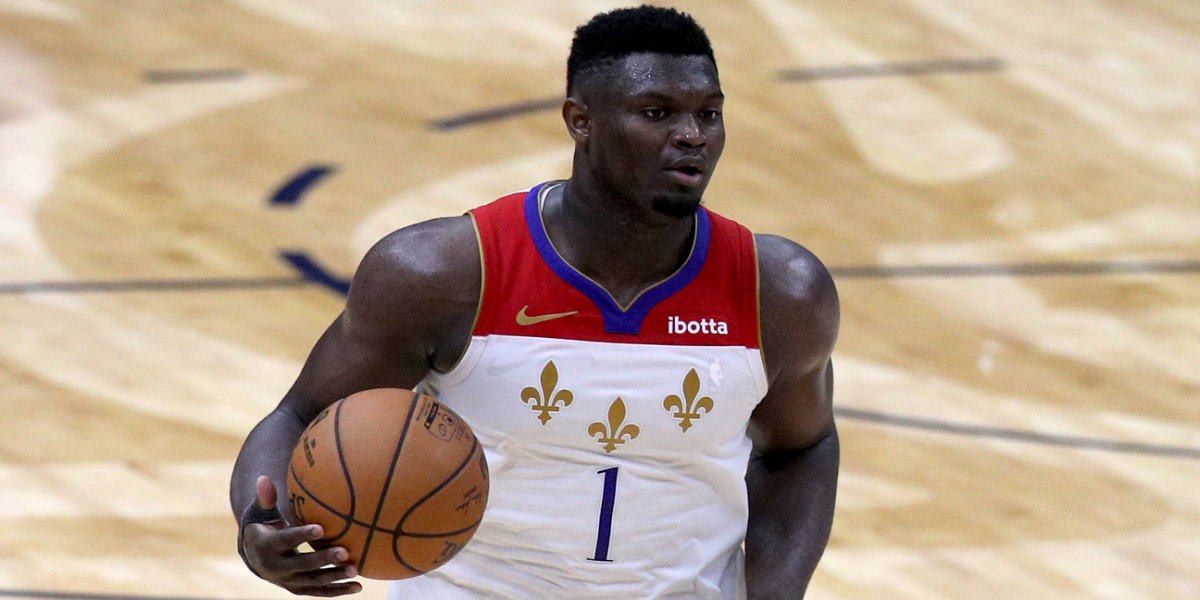 The NBA All-Star Break is just days away, but first, let’s talk about some post-trade deadline things this afternoon. CJ McCollum has been solid for the Pelicans during his first week in New Orleans, but will he get to play with Zion this season? Also, James Harden is calling Philly “the perfect fit” and claiming that it was his choice destination all along as he tries to justify pouting his way into another trade last week. That and more in a pre-All-Star weekend installment of ATA.

CJ McCollum is Cooking in NOLA

One of the more intriguing trades that went down last week during the NBA trade deadline was the one that sent CJ McCollum to the Pelicans. It signaled a reset for Portland and a win-now move for the Pelicans, who are flirting with a playoff spot in the Western Conference despite being without Zion Williamson for the entire season to this point.

Why is nobody talking about CJ McCollum post-trade? He's had the best performances of any of the guys that got moved. Averaging 26/7/5.5 on 51% from the field.

The Pelicans now have three upper echelon scorers in McCollum, Brandon Ingram, and Zion Williamson. But, when will Zion be ready to join Brandon Ingram and new teammate CJ McCollum?

Philly is “Perfect” for Harden … For Now

While the Philadelphia 76ers have already ruled James Harden out through the NBA All-Star break as he rehabs the left hamstring injury that plagued him in the waning days of his abbreviated stint in Brooklyn, Harden is at work with his new teammates in Philly, a place he recently called “the perfect fit” when speaking to the Philadelphia media on Tuesday.

“I just knew for a very long time this was a perfect fit,” Harden said. “Obviously, you have the best big man in the league in Joel, and then obviously the coaching. Just from top to bottom, it made sense. I’m just happy and blessed that I’m here. As Doc [Rivers] and everybody wants … it’s [about] being the last team standing. I’m excited for the opportunity.”

Harden went on to say that when he was initially strong-arming the Houston Rockets into trading him by not showing up to work on time, or at all, Philadelphia was his first choice.

Sources: After turning down an extension offer to become the first $50M a year player in league history, James Harden’s message to Houston is clear: Get me to Brooklyn. Rockets and Nets have been in contact, but there’s been no meaningful dialogue. https://t.co/qwJOQOxz5U

Is there another player in the NBA more full of it than James Harden?

Whatever, honestly. Philadelphia put all their chips in the middle of the table to acquire Harden, and if they don’t win a title this season, it’ll be interesting to see just how “perfect” of a fit Harden thinks Philadelphia is this summer when he opts out of his contract and hits free agency.

•   Slowly but surely, Ayo Dosunmu is making his way up the NBA.com rookie ladder, reaching the No. 6 position this week, his highest mark this season. Dosunmu is just outside of the top five now, including Evan Mobley, Scottie Barnes, Josh Giddey, Cade Cunningham, and Franz Wagner.

Ayo Dosunmu Has Reached New Heights on the Rookie Ladderhttps://t.co/7bX0uQL7E6

•   Dosunmu will have a chance to show off his game on the national level this weekend when he partakes in the Rising Stars Challenge this weekend in Cleveland as part of the NBA All-Star Game festivities. The former Fighting Illini guard is averaging 11.8 points, 6.9 assists, and 4.1 rebounds per game in his last 17 games since joining the starting lineup in the absence of Lonzo Ball. The rookie has also shot an efficient 54.1 percent from the field and 41.0 percent from downtown on roughly 4.0 attempts per game

•   Imagine being an Oklahoma City fan …

•   The Basketball Hall of Fame will announce the finalists for the Class of 2022 on Friday. You can view a complete list of the nominees up for consideration here.

Get your push notifications ready for this week. 📲

•   I know which broadcast I’ll be tuning into …

⭐️ “Inside the All-Star Game” with Ernie, Charles, Shaq, Kenny & Draymond in all-access format on TBS

•   Allen Iverson honored the legendary Julius Erving at the 2002 NBA All-Star Game by wearing his No. 6 on his jersey. I miss the traditional West vs. East format, and this clip reminds me of how cool it used to be when the players used to wear their jerseys in the game. The NBA will likely never go back to allowing players to wear their jerseys because they make too much money slapping sponsor logos on those ugly ASG uniforms that they spit out each year and sell at $150 bucks a pop to fans, but a guy can dream, right.

Allen Iverson speaks about wearing a #6 jersey in the All-Star Game as a tribute to Dr. J and Philadelphia back in 2002. #NBA75

•   Another goodie from the ’02 All-Star Game! This time it’s T-Mac hammering down a self tossed alley-oop. McGrady logged 24 points in 23 minutes of action in this one but the Western Conference got the win in Philly.

•   While we’re going down the All-Star weekend memory lane, let’s revisit Zach LaVine wearing the No. 23 Tune Squad jersey as he paid homage to Michael Jordan well before he ever came to Chicago.

Once you got that 23 on your jersey, there’s only one thing to do!