If the Playoffs Started Today, A Consistent Vucevic, DeRozan's Dominance, and Other Bulls Bullets Skip to content 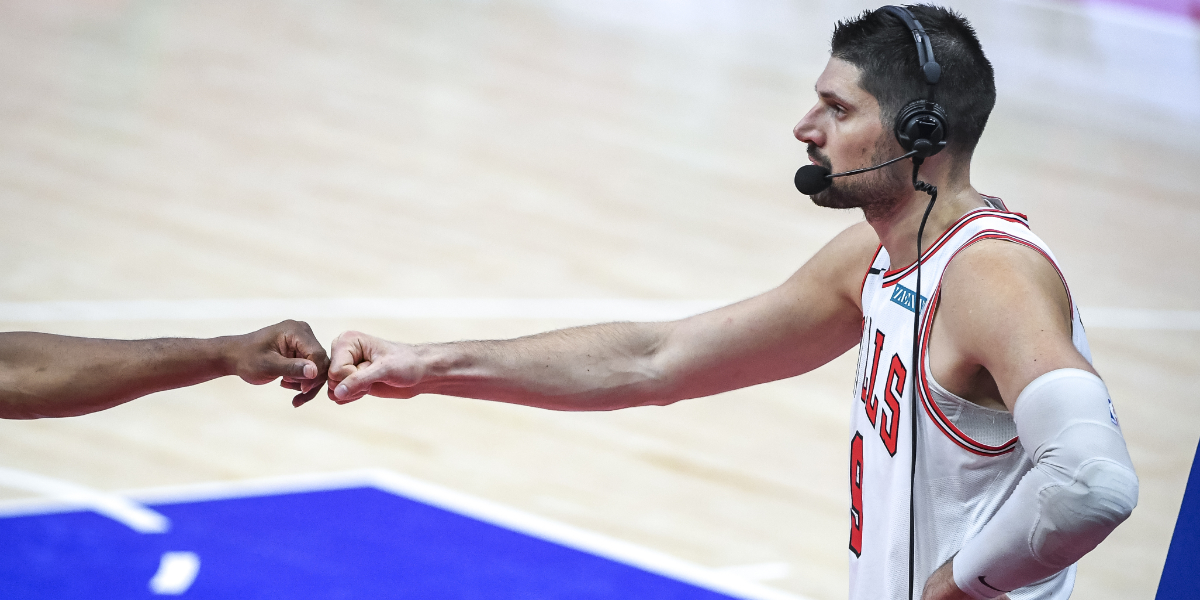 If these bullets suddenly feature an abundance of typos or repetitive Z’s, blame sleep deprivation.

My apartment building’s fire alarm decided to wake everyone up at the youthful hour of 4 a.m. We live in a pretty large building, so each apartment obviously has its own fire alarm, but the building also operates with its own industrial-like system in case of a greater emergency. And, you guessed it, that system happens to be excruciatingly loud.

I’m trying to chug as much coffee as my body can handle, but I still can’t guarantee that I’ll ma– ZZZZZZZZZ.

•   If the postseason started this weekend, the Chicago Bulls would claim their highest seed since the 2011-12 season. Meanwhile, the Hornets (10), Hawks (9), Nets (8), and Raptors (7) would be positioned to compete in the Play-In Tournament. Remember: The tournament works where the winner of the 7-8 matchup claims the No. 7 seed, and the loser goes on to play the winner of the 9-10 matchup. With that being the case, the Bulls would welcome either the Nets or Raptors in a first-round series.

•   There is still plenty of time for movement up and down the standings, especially when we consider only 2.5 games separate the seeds 1-5. However, this is something we have to pay closer attention to with just 23 games left in the regular season. The Bulls are still unsure exactly how healthy they will be when the playoffs arrive, and we also can’t forget the postseason doesn’t naturally favor the inexperienced groups. With that being the case, the idea of a matchup with the Nets or Raptors in the first round is a bit nerve-wracking. The Bulls might be 2-1 against both teams this season, but we’ve seen how the Raptors’ length can give the Bulls problems, and we all know how deadly a healthy Kevin Durant can be. Not to mention, both teams have more recent experience playing under the hot playoff spotlight.

•   I say all of that, knowing no series will be a cakewalk in this Eastern Conference, though. Not only do I have to embrace whatever cards the Bulls are dealt, but I just need to remind myself this is how playoff basketball goes. It’s been a while since we’ve had this organization reach the next level, so you all might have to bear with me as I try to navigate my emotions.

The current NBA Playoffs bracket coming out of the All-Star break 👀 pic.twitter.com/VVtYRvv4rH

•   Consistency is key. The Chicago Bulls strung together a five-game winning streak before the All-Star break, which could prove to be incredibly important with the league’s second-toughest schedule on the horizon. The goal will be to carry this momentum into a much-tougher stretch, and the only way the Bulls accomplish that is by Nikola Vucevic staying in his current lane. Even with LaVine returning, the Bulls need Vucevic to play the same confident and efficient brand of basketball we’ve seen from him since the start of the new year. He averages 20.6 points, 12.0 rebounds, and 3.8 assists per game in 2022, looking exactly like the consistently dominant rebounder and shotmaker the Bulls traded for during last season’s trade deadline.

In the Eastern Conference, the toughest remaining schedules belong to the Bucks (opponent win percentage of .554), Bulls (.543), and Knicks (.529), with all three having more games remaining on the road than at home. #NBA#FearTheDeer#BullsNation#NewYorkForever

•   It was always going to be hardest for Vucevic to learn how he fits in, which is why I was hesitant to call him out in the early portion of this season. He was used to having an entire offense run through him. DeRozan and LaVine may have had the same treatment, but those are two backcourt players who can create their shots and work off the dribble. A big man is inherently more reliant on his teammates to put him in a position to succeed, so building that chemistry with both DeRozan and LaVine was pivotal. He had to learn their tendencies as much as they had to learn his. Yes, the guy had to also hit his open shots, but his struggle likely led to some unfair treatment because of how fast everything else clicked.

•   Also, if we’re being honest, Vucevic’s life is only about to get easier. The signing of Tristan Thompson takes a weight off the big man’s shoulders. We could see him earn some more rest as he prepared himself for a hopeful playoff run. Unlike Bradley, Thompson truly has the experience and proven track record to play about 15-20mins a night reliably and even take a start or two.

•   I know I’m supposed to be past it by now, but I’m not: HOW THE HECK WAS THIS MAN CALLED THE WORST SIGNING OF THE OFFSEASON!!??? I will not pretend like I saw any of this coming, but the overwhelming hate this team got for taking a chance on a (now) five-time All-Star was mind-boggling. I’ll be curious to see if this situation changes how certain people evaluate free-agent signings moving forward. The chances are slim in this hot-take day and age, but many people were also made to look very silly by DeRozan’s dominance.

Deebo's numbers at the All-Star break:

•   Someone get me the “snip snap” gif of Michael Scott.

Update: Marko Simonovic has been assigned back to the @WindyCityBulls. https://t.co/OVtQngjgC4

LOL: Luka Doncic Wants to Know if DeMar DeRozan Has Ever Missed a Mid-Range Shothttps://t.co/wKC4ktW31g pic.twitter.com/reEp44U3I8

•   Only if he promises to hate the Packers.