Even though three players were in Cleveland for the All-Star Weekend festivities, the Chicago Bulls looked plenty rested when the ball tipped on Thursday night.

The Bulls got off to a quick 11-2 start, looking plenty active on the defensive end while DeMar DeRozan schooled the Atlanta Hawks’ 27th-ranked defense repeatedly. The All-Star starter continued his MVP-caliber campaign with 20 points in his first 10 minutes of action, dominating the midrange in a way that only he can.

But an energetic start for the Bulls wasn’t enough to keep Trae Young from making an impact. While the guard made just one of his first seven shots, he dished six assists in the first half and forced his way to the free-throw line for six makes. His crafty ball-handling and high-IQ passing chops started to tear apart the Bulls in the pick-and-roll game. The Hawks were able to shrink the Bulls lead all the way down to just 2 points heading into the locker room, setting up a back-and-forth second half.

Fast forward to the 58-second mark in the 4th quarter, and the Hawks were on the brink of spoiling a fun post-All-Star break night at the United Center. Danilo Gallinari had himself a strong final frame with 15 points, and the Hawks were dominating in the second-chance points category with a 24-9 advantage. However, as we’ve all come to know, only three things are constant in this life: Death, taxes, and DeMar DeRozan.

As the calmest, collected, and most clutch player on the floor, DeRozan made back-to-back midrange jumpers to seal the game, the second of which was an ice-cold turnaround jumper on the Hawks double-team. I swear he would have made it with his eyes closed.

DeRozan has now expanded his streak of 35-point games with a 50 percent field goal percentage to a historic eight games. He also becomes only the 7th player in NBA history to have eight-straight games with 35+ points.

DeMar DeRozan is the 7th player in NBA history with 8 straight 35-point games. He joins…

The league knows how special this is …

The Bulls have now won six games in a row and move to a record of 39-21 on the season. I have plenty more to say about what we saw from Zach LaVine, Ayo Dosunmu, and the newly signed Tristan Thomspon, but I’ll wait for tomorrow to dive into those thoughts. Besides, I think DeRozan deserves the full stage tonight. 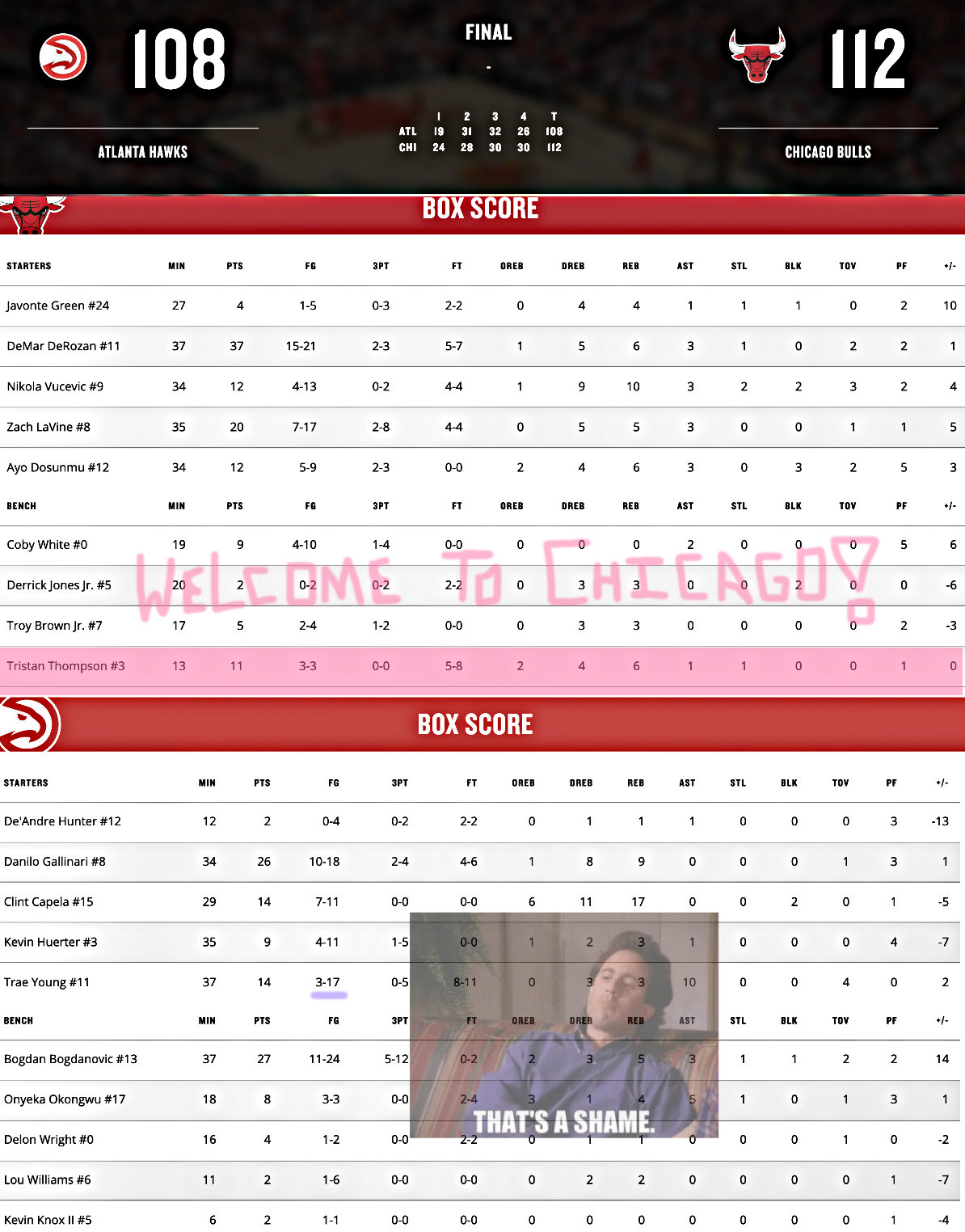