Welp. That wasn’t very fun at all. Third time (against Miami) was not the charm for the Bulls, who fell to the Heat 112-99 in South Beach on Monday night. It was probably their most deflating loss of the season.

The Bulls (39-23) are still in second place of the Eastern Conference as we flip the calendar to March, so it’s hardly time to hit the panic button (especially with the guys they’re missing right now). But Chicago is now 2-12 against teams with a winning percentage of .600 or better this season, and that’s a legitimate reason for concern. It’s not even so much the record itself that troubles me the most, but rather the way these games have looked.

The Bulls took a 4-0 lead to open the game, but that short-lived, four-pointer would be their final lead of the night as they looked overmatched from start to finish. Sloppy play, low energy, poor shooting, and a trio of dud performances by their big three of DeMar DeRozan, Zach LaVine, and Nikola Vučević. Miami hounded the Bulls all night long with double and triple teams. It forced the Bulls into playing a very uncomfortable-looking game that resulted in turnovers and multiple prolonged scoring droughts that allowed Miami to run away with this one.

DeMar DeRozan finished the night with just 18 points, snapping his 10-game streak of 30-plus point performances, one shy of tying Michael Jordan’s franchise record of 11 straight such performances during the 1986-87 season.

The Bulls turned the ball over 14 times and shot just 7-of-29 (24.1%) from three-point range on the night. DeRozan, LaVine, and Vučević combined for 8 of the 14 Bulls turnovers tonight.

Jimmy Butler scored 15 points and was all over the place with seven rebounds, four assists, and four steals in 28 minutes of action. Gabe Vincent and Tyler Herro scored 20 points for Miami, shooting a combined 5-of-11 from deep.

We can continue to stress that the Bulls are dealing with critical injuries, and that is indeed a fact, but the Bulls looked like they weren’t in the same weight class as the Heat on this night, and that’s a significant problem for this team’s playoff prospects. Will the presence of Ball, Caruso, and Patrick Williams help elevate their game, especially on the defensive end, eventually? Sure. But some of the problems we’re seeing go beyond simply getting these guys back. We’ve listened to Billy Donovan challenge this team to raise the intensity, but they looked lifeless tonight. The Bulls looked dull, and Miami bullied them into submission. 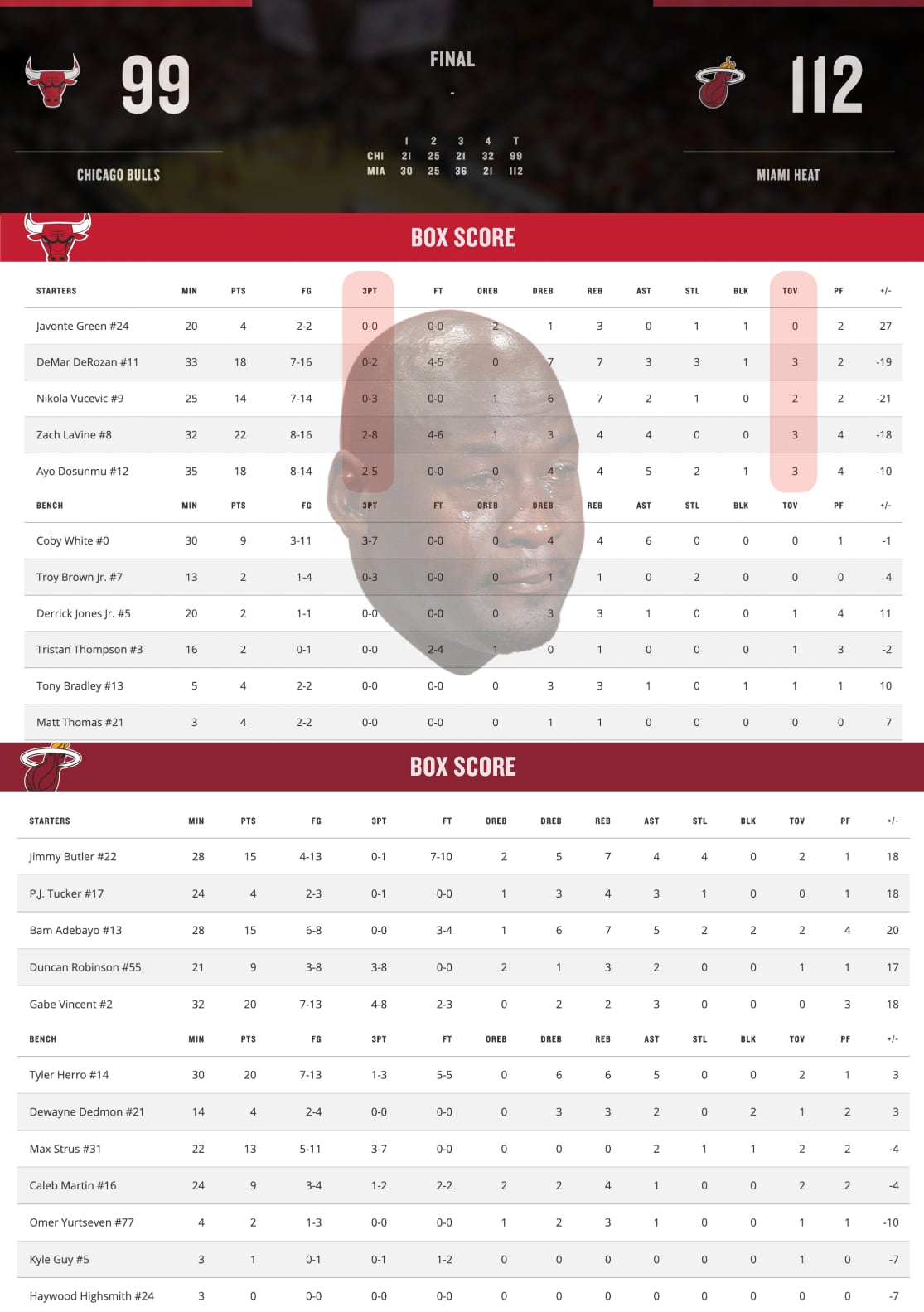