What Are Some Must-Win Games Left on the Bulls Schedule? Skip to content 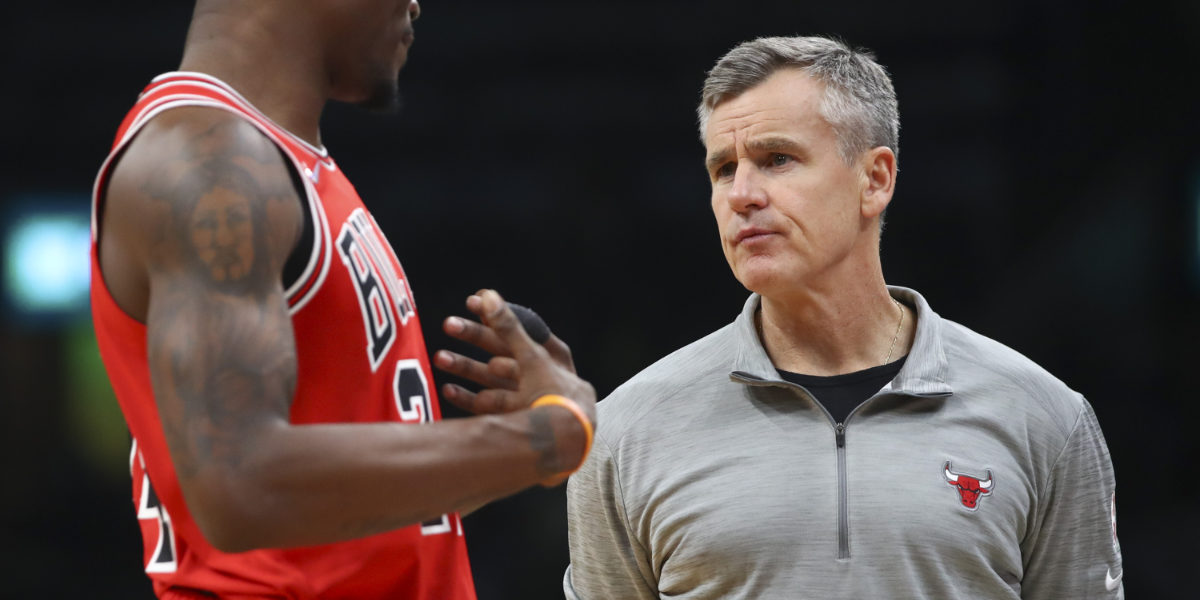 With 16 games left in the regular season, the Chicago Bulls’ playoff picture remains as fluid as ever.

Only half of a game separates the Bulls from swapping places with the Boston Celtics for the 5th seed, and it’s currently the same margin in the opposite direction if the Bulls want to pass the 76ers for the 3rd spot. Overall, just 5.0 games stand between the No. 6 seeded Cleveland Cavaliers and the top-dog Miami Heat, creating one the most competitive fields we’ve seen in the East in quite some time.

Here’s a look at the top-10 teams and how many games behind No. 1 each squad currently stands:

The good news for the Bulls is that while they have plenty of space to move in either direction, it’s hard to imagine that’s any more than a couple of spots downward. The Play-In Tournament starts with the No. 7 seed, which the Bulls still land 4.5 games away from. Losing that much ground would take a significant drop-off, but I guess we can never say never in the NBA, right? After all, the Bulls do have the second-toughest remaining schedule in the league, so there is little question they must take advantage of every winnable game that rests ahead.

With that being said, let’s take a quick look at some of the must-win games left on the schedule …

The Chicago Bulls have so far split the four-game series with their Central Division rival. They were without DeMar DeRozan in their first battle back in December, noticeably struggling to maneuver their offense around the Cavs’ jumbo lineup, shooting a dismal 41.7 percent from the field.

The tide turned on January 19th, though, as the shorthanded Bulls used 25 assists to shoot 54.5 percent from the field. Coby White, Ayo Dosunmu, Nikola Vucevic, and DeMar DeRozan all scored in double-figures, using their versatility and athleticism to get to the rim and play ahead of the Cavs’ defense. There is arguably no reason the Bulls shouldn’t be able to do this again, particularly when we consider Cleveland’s recent struggles. Not only has the team dropped six of their last nine games, but All-Star big man Jarrett Allen is in line to miss both games with a finger injury. Caris LeVert has also been on the sideline since February 15th with a foot issue.

When we remember Cleveland sits just 1.5 games behind Chicago in the final sure-fire play-in spot (No. 6), the Bulls have to take advantage of both these opportunities against a struggling threat.

Sacramento is the first stop on the Bulls’ upcoming Western Conference road trip, and it’s a must-win matchup knowing both the Utah Jazz and Phoenix Suns make up the next two games.

The Bulls poured on the points the last time these two met, dropping 125 on 50.0 percent shooting from the field and a 19-20 performance from the free-throw line. Expectations should be just as high this time around against a 28th-ranked defense that has allowed the 2nd-most points in the paint per game.

Chicago took down this Toronto crew in their first few matchups this season, but they looked plenty vulnerable in their meeting on February 3rd. Every Raptors starter scored in double figures as they knocked down a combined 14 3’s. The team also used their relentless energy and length to dominate on the offensive glass 22-10 and force Chicago into 17 TOVs. The Bulls will have to prove this time around that they have learned from their mistakes. As one of the more physical teams in the conference, this is an opportunity to match the Raptors’ intensity and remind everyone why you belong in the tier above.

Also … as long as Nikola Vucevic plays, there is no reason the Bulls should be on the wrong side of the scoreboard. The Raptors may have a few lengthy forwards who can put pressure on the glass, but they have a significant hole at center. Vucevic dominated with 30 points and 18 rebounds the last time these two played. He did everything he could to get the win, and the Bulls have to have his back this time around.

Shortly after the New York Knicks handed the Bulls their first loss of the season, their script flipped. An organization that was one of the NBA’s best stories in 2020-21 quickly resorted back to its old ways, struggling to pick a direction while searching for star talent. The Knicks sit 12th in the East with a 23rd-ranked offense in the league. Even worse, the defense they prided themselves on one season ago has now dropped just below league average.

Chicago beat New York twice after the initial loss, and the story should be the same this time around. An inconsistent offense with a transition defense that ranks in the bottom third of the league, the Bulls can simply win this with their bucket-getting.

Like the Knicks, the Wizards quickly became the opposite of what their early-season success became. And that led to some massive deadline changes.

After signing a deal with the organization this past summer, Spencer Dinwiddie was traded with Davis Bertans to the Dallas Mavericks in exchange for big man Kristaps Prozingis. The organization may sit just 3.0 games out from a Play-In Tournament appearance, but it sure feels like they are mostly looking toward this offseason as they try to figure out a future with The Unicorn and extend Bradley Beal (who is out for the remainder of the regular season). You can’t lose to a team like that.

A team trying to stay in the Play-In Tournament mix, the Hornets will likely come out with plenty of energy in this final week of the regular season. The Bulls can’t fall victim to that.

Chicago beat Charlotte by a combined 26 points in their two meetings this season, dominating on the offensive end in almost every facet of the game. The Hornets play right into the Bulls’ hands with the 3rd-highest PACE in the NBA, meaning their efficient offense will have plenty of opportunities to find the bottom of the net. Not to mention, they also happen to be one of the few teams worse than the Bulls at rebounding the basketball, allowing the most 2nd-chance points per game.

In the last game of the regular season, I’m just reminding you this could always become a meeting that decides the Bulls’ first-round series.