A Tough Battle with the Knicks, Keep the Ball Moving, LOL Lakers, and Other Bulls Bullets Skip to content 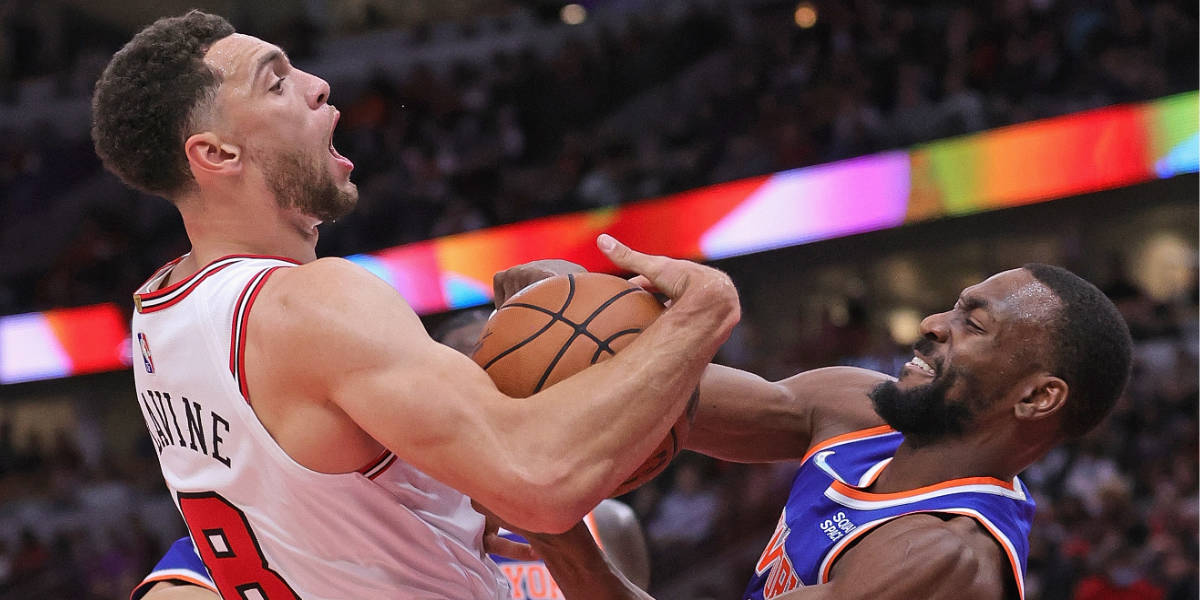 I feel like the internet and pop culture police will bust down my door and mace me if I don’t mention The Slap. Society never lacks at least some kind of meme-able moment, but I think it’s been quite some time since we received one this pristine.

When someone says DeMar DeRozan was the worst free-agent signing: pic.twitter.com/wykIdJGObQ

“LeBron is the GOA-“ pic.twitter.com/4nHKWnI09i

•   The Chicago Bulls left us with mixed emotions last week, palate-cleansing two frustrating losses to the Bucks and Pelicans with much-needed victories over the Cavaliers and Raptors. The way they finished the week in Cleveland was truly impressive. Not only did they hold the team to just 94 points after one of their better defensive showings in recent weeks, but the new-look starting five of Dosunmu-Caruso-LaVine-DeRozan-Vucevic seemed to provide some real answers. On one end, we saw a perimeter defense that made life that much easier on the Bulls’ frontcourt. On the other end, we saw Nikola Vucevic’s playmaking help re-channel the equal opportunity offense that dominated during the early portion of the season. One can only hope the things learned in that game – as well as the things figured out in both brutal losses – can help Chicago finish these last eight games on a high note.

•   Before returning for five-consecutive games at the United Center, the Bulls will have to finish a trying road test with a back-to-back set against the New York Knicks and Washington Wizards. As two teams currently sitting outside the Play-In Tournament picture, one would like to imagine a Bulls team desperate to lock in their first playoff series since the 2016-17 season could take care of business. However, if recent losses to squads like the Sacramento Kings and New Orleans Pelicans have taught us anything, it’s that there will be no cruising to end this regular season.

•   New York could present a particularly troublesome matchup for Chicago. While the Bulls have been able to snatch two of the last three games against this underwhelming team, each victory came by just six points or less. The Knicks have also found a decent rhythm since the All-Star break, holding a .500 record and a current three-game winning streak. They continue to be one of the league’s best rebounding teams, especially on the offensive glass where they average the 4th-most second-chance opportunities per game. We all know how problematic that can be for a Bulls team that sits dead-last in OREB%.

•   The Knicks also average the 2nd-most free-throw attempts per game, which is a stat that makes my armpits the slightest bit damp. Chicago has given up the 6th-most free-throw attempts per game since the All-Star break, and their inability to defend without fouling was a major reason why they lost to an inferior team in the New Orleans Pelicans last week (allowed 34 FTAs). To avoid letting the charity stripe take control of tonight’s game, we’ll have to see another encouraging performance from the Bulls’ first-line of defense. Cutting off driving lanes and disrupting the POA against the athletic R.J. Barrett, who leads the tame with 5.7 FTAs per game, will be a must. The same can be said about guarding the physical Julius Randle, who has shot at least 8 FTAs in two of his three matchups against the Bulls this season.

•   The Athletic’s Darnell Mayberry posed a very important question about this Bulls’ offense:

Will the Bulls ditch isolation ball once and for all before it’s too late?

•   As I mentioned above, we saw the team ditch this isolation scoring in their most recent victory against the Cavaliers, but whether or not it can become a trend is up for debate. There is no question both Zach LaVine and DeMar DeRozan can do significant damage as isolation scorers, and establishing them as such in each game does help open up the floor for everyone else. With that said, this team is simply at its best when the ball is moving around the horn. Continuing to play from the inside out could force more off-ball movement from strong cutters like Alex Caruso and LaVine. And while the team’s best kick-out shooter may still be on the sideline, there are still a number of viable options that can knock down open looks. Anyway, I encourage you to read Mayberry’s latest above because I sure hope this offense can re-take a more deadly shape.

•   I’m still very upset with the Bulls’ loss to the Pelicans last week, but I still give them a round of applause for making the Lakers’ season that much worse last night. New Orleans beat Los Angeles at home 116-108 to push them into the last remaining Play-In spot. The San Antonio Spurs now sit just one game back from knocking the Lakers out of the postseason entirely. Do I see that happening? No. But the Lakers have the second-toughest remaining schedule in the NBA, according to Tankathon, so buckle up.

•   Kenny Beecham did some online sleuthing to learn the Lakers’ social team refuses to use LeBron James in any losing post-game graphics. Give him a Pulitzer.

The Lakers social media team got some explaining to do 😂 pic.twitter.com/sB5pNxXAFW

It was the 4th of Jordan's 5 career 60-point games. pic.twitter.com/i2dwsjyPRA

•   If you haven’t watched it already, the latest episode of All-Access is out.

•   We’re going to have to deal with this being used in ridiculous ways forever, aren’t we?

The Bills Are “Working Through” the Bears’ Offer Sheet for Ryan Bateshttps://t.co/aqM4S9dmM3 pic.twitter.com/Q5rkyn1gIL