Facing Paul George, Who Would You Want in a Playoff Series? Zach and DeMar are Clutch, and Other Bulls Bullets Skip to content 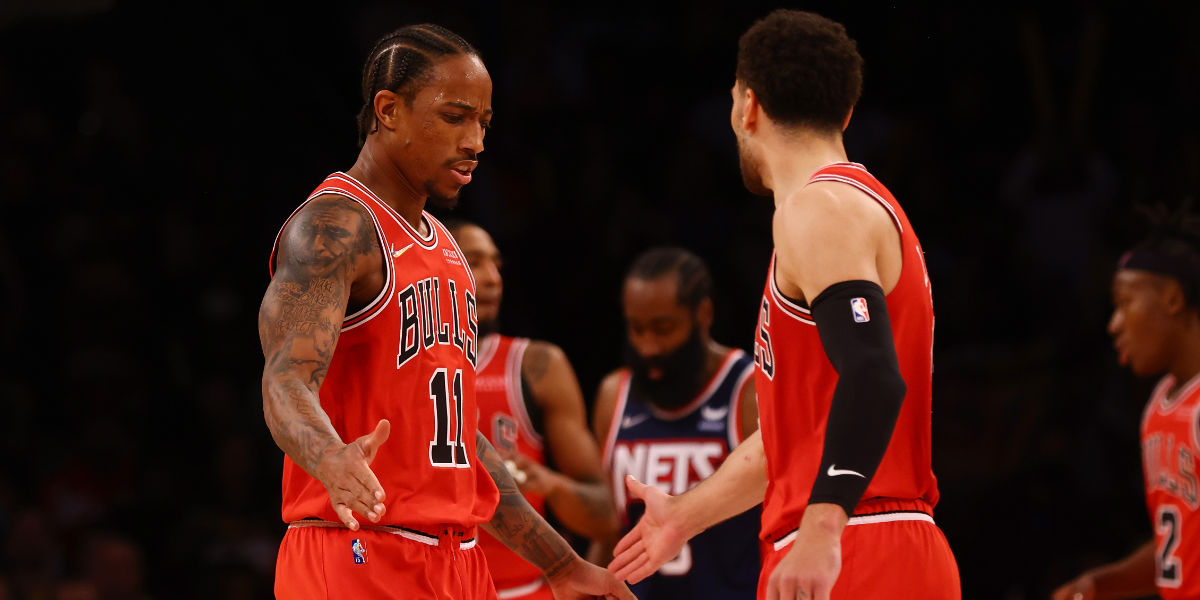 LA’s offensive rating sat at an underwhelming 26th on the season, and while they may have had a firm grasp on the No. 8 seed in the Western Conference, they were still a team trending in the wrong direction with the Play-In Tournament roughly two weeks away. Then – similar to when I tasted a Sarkis Bacon Loretta for the first time – everything changed.

•   Paul George returned to the floor on Tuesday night. The 7x All-Star missed 3 months due to an elbow injury, but he didn’t look like anything other than one of the best two-way players in the game when he stepped back on the court. Paul dropped 34 points with 6 assists and 4 steals in a victory over the Utah Jazz. He helped drag his teammates back from a 25-point deficit, scoring 26 of his points in the second half. George also went 8-11 from the free-throw line and knocked down six 3-pointers. Again, considering the man rode the bench since late December, it was quite an incredible first game back.

•   Now, the Chicago Bulls get to welcome the rejuvenated Clippers to the United Center. One can only hope George is a bit gassed after his big night, as he can be an impossible defensive assignment for even the best perimeter defenders. As for the rest of the team, while they have struggled as of late, they have carried the NBA’s 8th-ranked defense in Paul’s absence this season. They have held opponents to the 6th-lowest field goal percentage thus far, and they have sent teams to the free-throw line for the third-fewest attempts per game. They play numerous switchable forwards like Nic Batum, Robert Covington, and Terance Mann, and they also possess a sturdy rim protector in Ivac Zubac. Add in the perimeter size and pressure of  George, and this could be a tough matchup for a Bulls offense that has become rather inconsistent.

•   The good news for the Bulls is that the Clippers tend to struggle on the offensive end. Their 52.4 effective field goal percentage sits 21st in the NBA, and Cleaning the Glass puts the Clippers just 17th in points per 100 possessions in the halfcourt. LA also attempts the 4th-most mid-range shots per game but shoots the 6th-worst clip from that area of the floor, which is very different from a Bulls squad that shoots the most and converts at the 3rd-best rate.

•   Chicago has easily been one of the most homesick teams in the NBA. They now hold just an 18-22 record on the road compared to their 26-10 record at the United Center. Fortunately, they will now play five of their final six games in their home building. Can this final provide the momentum boost they need?

•   I sent the below poll into the Twitterverse on Wednesday. Depending on when you might read this, you may still be able to vote, but I think it’s pretty clear by now who folks prefer to play in the first round: The Celtics. I initially assumed this would be the opponent the majority selected, and I 100 percent agree it’s the right choice.

Imagine the regular season ended today: Who do you prefer in a first-round series?

•   As well as the Celtics have played since the All-Star break, the Bulls arguably match up the best with that roster. Not only is this the only potential opponent they have beaten once already this season, but Boston does not possess the same kind of All-NBA-caliber center that has given this undersized Bulls roster serious problems. Robert Williams III has also ended up on the injury report after receiving meniscus surgery earlier this week. An anchor to their breakthrough defense, his absence for potentially the entirety of a first-round could play a huge factor.

•   Look, I’m as terrified of Jayson Tatum and Jaylen Brown as much as the next guy, but I think we also know the Bulls have two scorers who can go toe-to-toe with almost any duo on any given night. The Bulls might even have the leg up when it comes to close games. While Brown is always a threat, Tatum feels far more like the go-to option who can create his own shot in crunch times, whereas the Bulls have both DeRozan and LaVine who can get their team a bucket. Basketball News dot com shared quite the awesome graphic outlining the high-usage players with the best true shooting percentage in the clutch, and guess the only pair of teammates to rank in the top-5?

Entering tonight, these high-usage players have the best True Shooting percentage in the clutch 🔥

How about the Suns ☀️👀 pic.twitter.com/4LflUTwrGS

•   No matter the playoff series, the Bulls will walk in as the underdogs. But I take some solace in knowing any team will be fearful of this scoring duo. The LaVine-DeRozan pairing has been one of the most lethal combinations all season long. And when the game slows down in the playoffs, they could present a real pick-your-poison predicament.

•   Speaking of playoffs, the Celtics and 76ers both declined to inform ESPN of their vaccination status. Both teams could end up playing the Toronto Raptors in a first-round series, and Canada currently forbids unvaccinated Americans from entering the country. A potential huge storyline to keep an eye on.

New ESPN story: Asked in the past 24 hours if their teams are fully vaccinated, the Heat and Bucks said they were. The Celtics and 76ers declined to do so – meaning they could be missing players for road games in a possible first round series with Toronto. https://t.co/TQD07Qo7rI

•   I reserve my anger toward refs for the black and white striped pillow I have on my couch, and this one made me body slam that sucker into the ground. HOW DO YOU CALL THIS!?

Good or bad call on this ejection? 🤔pic.twitter.com/iq7kCVojq6

•   Meta moment: Please always try to seek out the original source. There is a reason we work hard here at Bleacher Nation to ensure the correct source material is always linked and/or quoted appropriately. As someone who comes from a more traditional journalism background, proper attribution is something very important to me. I hate when people attempt to twist words or misuse information for the sake of their own engagement. Keep an eye out for that stuff.

Don’t usually respond to bad aggregation but this one is particularly egregious and misrepresentative of what I wrote, especially because I was responding to a hypothetical situation in a reader mailbag. pic.twitter.com/Sr1Jdrt2mp

I know this is Alvarado’s thing but doing it in Portland with the red jersey on is unfair and genius. Like the set up to go from spaced to setting up. https://t.co/yImrmefXIH

Turns Out There’s a Pretty Good Reason Why Michael Conforto Hasn’t Signed Yet – https://t.co/zGC3UHuITD (via BN)