If the Bulls Want to Make it a Competitive Series, They'll Have to Hit Their Dang 3s Skip to content 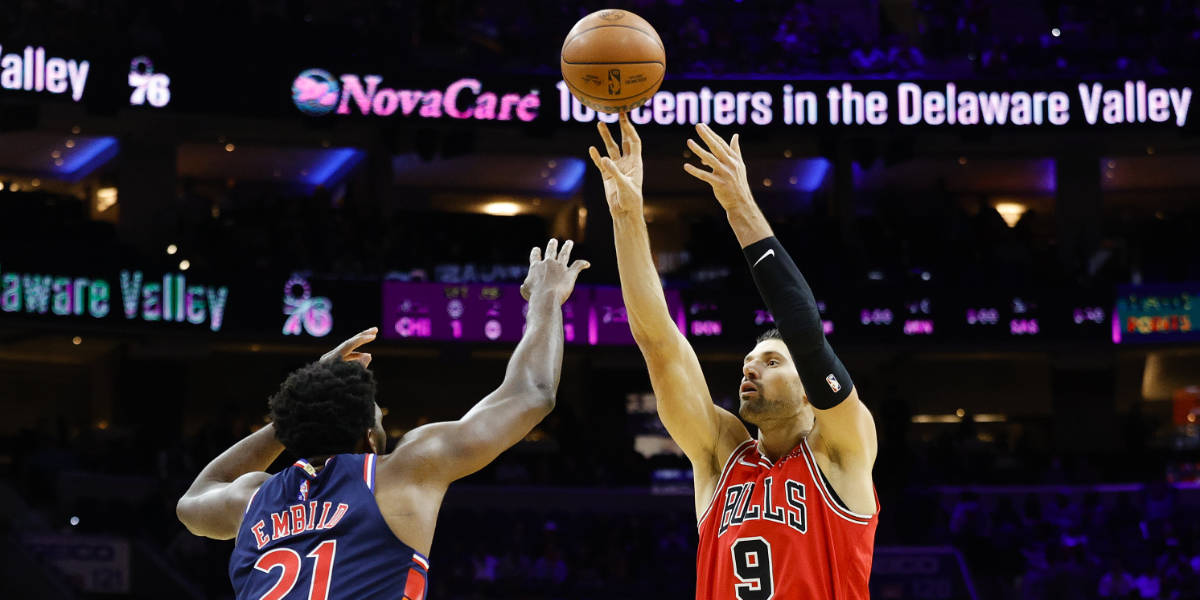 Like almost every older sibling, the Milwaukee Bucks are good at just about everything. And, like almost every middle child, the Chicago Bulls have some serious flaws (albeit … lovable ones!).

This upcoming matchup could very well give off a big-brother-demolishing-little-brother vibe from the opening tip. After all, Milwaukee is the defending champion with a 2x MVP and defensive player of the year leading the way. What about the Bulls? Well, they’re a franchise that hasn’t tasted the playoffs since the 2016-17 season and a collectively inexperienced group. If we’re being honest, the organization should simply be happy to be back in a first-round series.

None of that is to say this group isn’t going to play their butt off, though. While the Bulls may not be the best or the brightest, they should know how to get under their older sibling’s skin, and that will start by dominating the 3-point line this Sunday.

No team in the NBA allows their opponent to shoot more 3-pointers per game than the Milwaukee Bucks. Now, to be clear, a lot of that is by design. This is an elite defensive group that prioritizes walling off the paint. Thanks in large part to the big bodies of Brook Lopez and Giannis Antetokounmpo, the Bucks allow opponents to score the 4th-fewest points in the paint per game. There is no question that is a major concern for down-hill and midrange threats like Zach LaVine and DeMar DeRozan. But that’s also exactly why the Bulls must take advantage of the opportunities they will get behind the arc.

Since the All-Star break, teams playing the Bucks have to shoot a league-high 39.2 percent from downtown. The number jumped all the way up to roughly 44.0 percent in the Bucks’ seven losses since mid-February. In other words, not only are the opportunities going to be there against Milwaukee, but to stand a real chance at pulling off a victory, the Bulls are going to have to shoot the ball efficiently.

The good news is that Chicago has shot the 4th-highest clip from 3 on the season. The bad news is they have shot just 34.8 percent since the All-Star break, which happens to rank just 21st in the NBA. The even worse news is the Bulls are not at all accustomed to chucking up a high volume of 3-pointers. Practically all season long, head coach Billy Donovan’s crew has shot the fewest 3-point attempts per game. In fact, they finished out the regular season averaging nearly two full 3-point attempts fewer (28.8) than the second-to-last Washington Wizards (30.6).

Chicago’s inability to increase their volume and convert at a high clip has been on full display against Milwaukee. According to NBA Stats, the Bulls shot an atrocious 31.0 percent on 3-pointers considered open against the Bucks in their four games this season. Even worse, the Bulls went just 24-79 on downtown shots considered wide-open! When we take into account those abysmal shooting numbers, it comes as absolutely no surprise half of the games against the Bucks turned out to be no contests.

So … it can’t possibly stay this bad, right? I think that’s up to the players.

Nikola Vucevic is one name who must re-establish his shooting stroke for the Bulls to have a chance in this series. As a player who shot 40.0 percent from behind the arc last season and roughly 35.0 percent over his career, his 31.0 percent performance this season has been a head-scratcher.

Vucevic has to find a way to capitalize on the pick-and-pop opportunities that will undoubtedly be there against this Bucks defense. I also expect him to get a handful of kick-out looks like we saw when these two faced off at the United Center earlier this season. The goal was clearly to move him out of the paint to open up driving lanes for DeRozan, who then was able to kick out to a wide-open Vooch in the corner when the defense collapsed. The Bulls’ big man went just 1-6 from long-range, though, missing four from the corner. That can’t happen.

The inevitable trapping and doubling of DeMar DeRozan and Zach LaVine will also only lead to more open looks, which is where a role player like Coby White has to step up. The organization continued to invest in White’s growth by deciding to seemingly keep him off the table at this season’s trade deadline. The decision felt more than acceptable considering White was shooting roughly 37 percent on his 3s. However, coming out of the All-Star break, White shot just 33.0 percent from behind the arc until his 6-9 showing against the Hornets. One can only hope that performance in his final game of the regular season can push him back in the right direction.

The responsibility will also fall on the shoulders of guys like Alex Caruso and Patrick Williams. The Bulls will hope Caruso can finally find a rhythm after shooting just 30.8 percent since returning from his wrist injury, while Williams could arguably stand to get more shot attempts from downtown after going 12-23 in his last 12 games.

To be clear, knocking down these normally open 3-balls will not be the lone key to success. But the more they can take advantage of those looks, the more they will force the Bucks’ defense to defend on the perimeter, thus providing the Bulls’ two All-Star scorers more room to work.