The Chicago Bulls came into this series as they heavy underdogs, and they showed why immediately.

The Milwaukee Bucks broke out into a 9-0 run to start the game. The frontcourt duo of Giannis Antetokounmpo and Brook Lopez gave the Bulls instant fits, overpowering them down low for some easy baskets. The trend continued through the rest of the frame, as the Bulls failed to find any rhythm on the offensive end. DeRozan missed a few solid midrange bunnies and Caruso shanked some wide-open 3-pointers, which is something the Bulls simply can’t have against a Bucks team that allows their opponent to shoot the most 3s per game.

The game looked like it was about to go even further down the drain as the Bulls walked into the 2nd quarter already with a 13-point deficit. But then something changed.

The off-the-bench energy of Javonte Green and Derrick Jones Jr. helped cool down the Bucks’ hot shooting, and the Bulls proceeded to tap into the downhill game that led to so much success this season.

The lead at halftime sat at just 51-43, and the Bucks’ mind-boggling last-place net rating in the 3rd quarter helped the Bulls continue to gain momentum. Chicago rattled off a 13-0 run at one point, getting major buckets from Nikola Vucevic and Coby White to eventually take the lead.

The 4th quarter became a back-and-forth affair – one filled with questionable foul calls and less-than-stellar shot selection. Some clutch buckets by Brook Lopez ended up giving the Bucks the cushion they needed, and Game 1 was officially Milwaukee’s to seal at the free-throw line.

I’m not sure how I feel about this one. On one hand, I’m thrilled it ended up as close as it did. The Bulls were in a legitimate position to steal the game thanks to some real physicality, communal rebounding, and efficient work at the charity stripe. It should give us some reassurance that this group understands what it will take to give the Bucks some problems moving forward.

On the other hand, the game was there for the taking. I mean, when else is Milwaukee going to shoot just 40.5 percent from the field and 26.3 percent from behind the arc? When else are they going to turn the ball over 21 times!? Sure, the Bulls might shoot better in the games to come too, but this felt like a prime opportunity to pull off the upset. And they failed. Ugh. MAJOR UGH.

Anyway, I’m currently typing this as I walk out of the Fiserv Forum listening to Bucks fans all-too-excitingly celebrate a game they almost dropped. I’ll have way more thoughts tomorrow, but I’m going to spend the rest of the night drinking away my sorrows with the girlfriend and reassessing what we just watched. See ya. 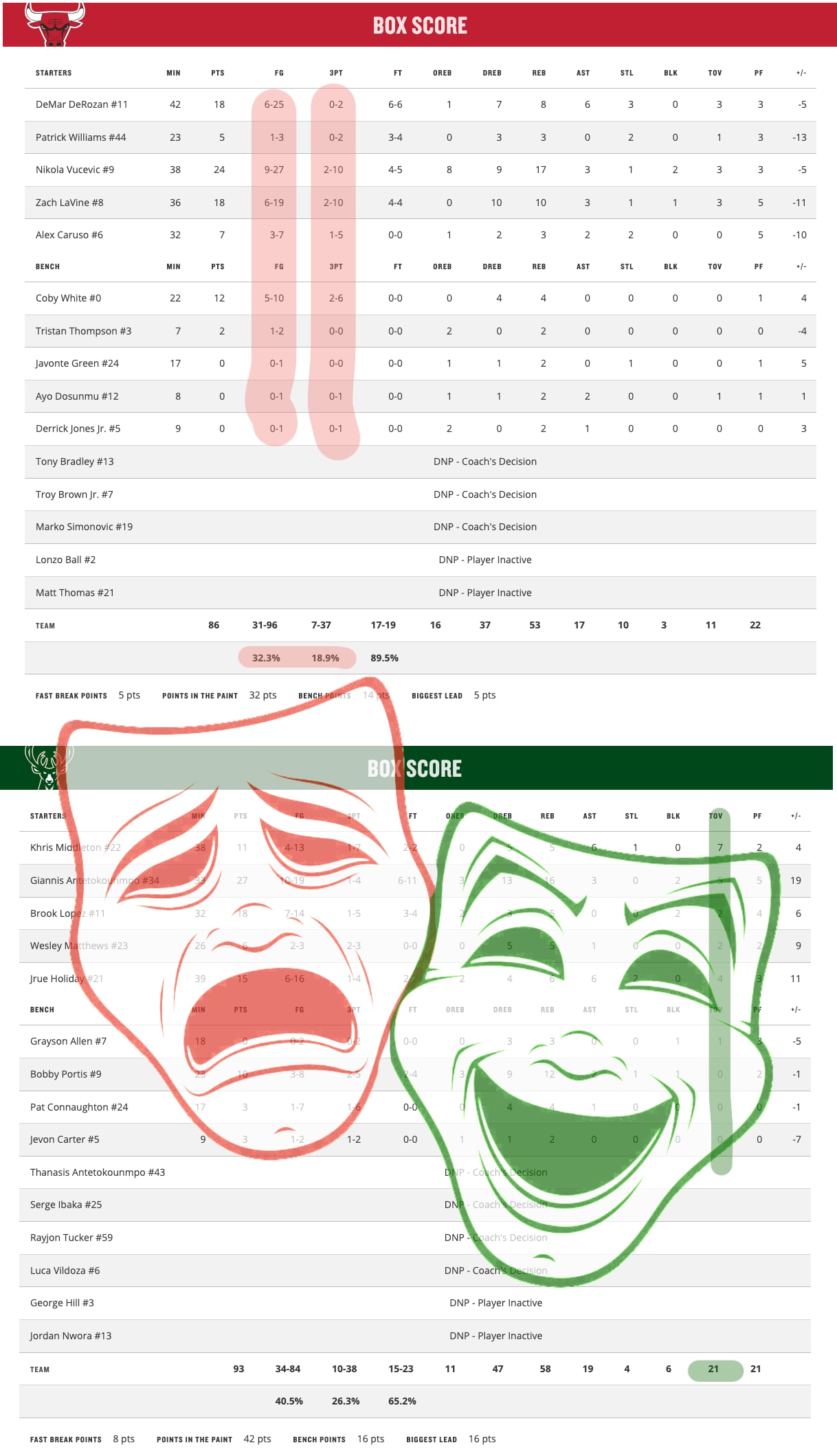