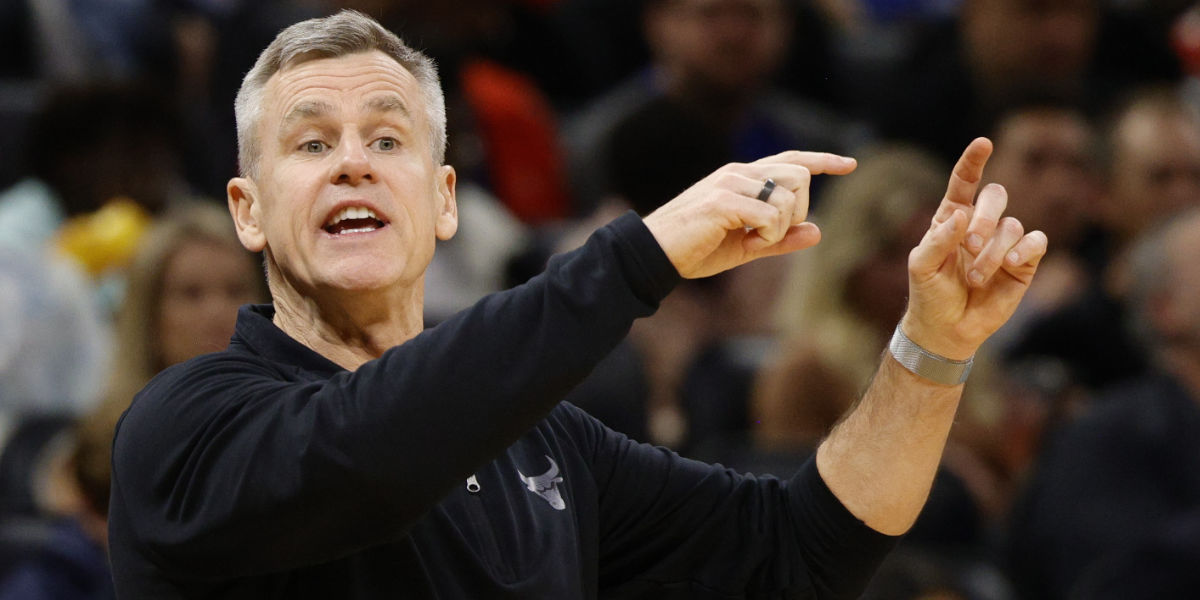 Sorry for the delayed bullets. A new coffee shop opened up down the street from me, and they happen to sell the best hand pies on this side of the Mississippi. I spent a good portion of the morning worshipping its decadent filling and flaky crust before suffering a brief period of pie withdrawal.

•   I’m not calling up executives or sipping fancy wine with players, but I can safely say the Bulls’ reputation around the league has improved. A once losing organization with a dysfunctional front office, there never seemed to be much interest or faith in where the Bulls’ brand was headed. Now, after an offseason (and winning season) where names like DeMar DeRozan, Lonzo Ball, and Alex Caruso chose to wear red, it feels like a page has turned. We can thank the aggressive actions of Arturas Karnisovas and Marc Eversely for that, but we also have to tip our cap to the grounding presence of head coach Billy Donovan.

“I love it here,” Donovan said at his end-of-season press conference. “I love the city, I love working with Arturas, our staff, everybody … I love where we’re going and where we’re moving. I love the conversations and I love the dialogue.

•   The Donovan hire only further cemented how eager this franchise was to get back on the map. Not only has he been a well-respected leader around the league with a proven track record, but he left OKC on his own terms due to the team trending in a direction he didn’t want to go (*cough* tanking *cough*). With that in mind, I was extremely surprised the Bulls were able to convince him to come aboard. They were an unproven organization with an unproven product. But they clearly sold to Donovan that (1) they wanted to win sooner than later and (2) they needed his expertise to do just that. And, boom, two seasons later the team made its first playoff appearance in five years.

•   I’m not trying to say that Donovan is the best coach in the league or anything like that. He has flaws, and he has to prove again that he can lead a franchise past the first round. However, Donovan has long been viewed as a player-coach and someone who knows how to put individuals in a position to succeed. He’s a steady hand and a culture creator. There is no doubt in my mind he has been pivotal in establishing a more healthy work environment behind the scenes – one that was previously tainted by the lack of discipline from Fred Hoiberg and the lack of sincerity from Jim Boylen.

•   Donovan comes off more self-aware than any recent Bulls coach I can remember. He’s held himself accountable for the lack of production down the stretch, and he mentioned just that as an area he wants to figure out this summer:

“Are we disappointed with moments in time in the season? Absolutely. Do we feel like we need to get better and improve? Absolutely … I’ve got to take a really hard look at the fact of why were there certain situations in the face of adversity where we were really really good but later in the year we weren’t as good? We were kind of a team I thought were really really hungry early in the year and then after the All-Star break I didn’t feel like we had that same kind of hungry. And we have to understand the importance of developing it.”

•   Knowing Donovan’s past success with role players like Andre Roberson, Lu Dort, Darius Bazley, and Terance Ferguson, I don’t think it’s at all shocking that Javonte Green had his career year in Chicago. As I said, Donovan is one of the best in the league at highlighting a player’s strengths. The question I have now, though, is whether or not Green and Donovan did such a good job together that other teams could come calling. Green might fit well around the Bulls’ current stars, but what if the front office could add more size or shooting in a trade that includes him? Considering I don’t envision any of the core players moving this summer, we have to look more at guys like Green (and even Coby White) as potential trade chips.

•   The last episode of All-Access this season features brief sit-down interviews with the team’s key guys. Each guy wraps up the video with a nod to the fanbase, as well as a promise to learn from their bitter playoff exit. Give it a watch:

•   I guess Phil Jackson is pushing the Lakers toward some notable names.

•   The Lakers, Kings, and Hornets are all looking for new head coaches, and I wouldn’t be surprised if teams like the Jazz or Hawks join the mix soon. I always say it, but I think it’s a point we can’ forget: A head coach change can oftentimes be just the first of several changes. These are hires who typically come in with significant say, and that could lead to some surprising roster moves (maybe ones the Bulls can take advantage of).

•   Speaking of which, I’d keep a close eye on Marc Eversley over the next couple of months. I expect him to be a candidate for top front office jobs around the league in upcoming seasons, and this is obviously the time of year when his phone could starts ringing.

•   Jordan’s celebration after this bucket might be even more iconic than the shot itself.

On this day in 1989 – Michael Jordan takes “The Shot” – his buzzer-beating jumper over Craig Ehlo to give the Chicago Bulls a 101-100 win over the Cleveland Cavaliers in the fifth and deciding game of their best-of-five Eastern Conference First Round series. pic.twitter.com/OaAvnzwioI

•   It’s a beautiful day for a doubleheader!